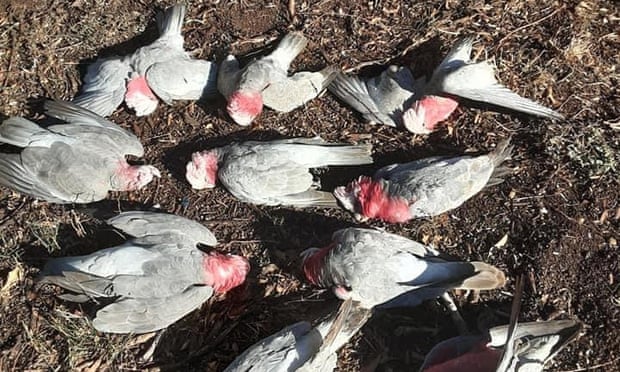 Dozens of birds have been killed through poisoning amid concerns that methods to eradicate a growing mouse plague in eastern Australia are hitting other wildlife.

The New South Wales Environmental Protection Agency has asked the public to “think carefully” about the amount and location of mouse bait being used, after an investigation confirmed that some birds in the central west of the state – including around Forbes, Parkes, Dubbo, Narromine, Condobolin and the Riverina – had died after ingesting the bait.

Kelly Lacey, a volunteer for the NSW Wildlife Information, Rescue and Education Service (WIRES) came across about 100 dead galahs on Monday morning in a cemetery in Parkes.

“I received a call from another WIRES member, saying ‘I think you might want to see this, there are dead galahs everywhere,’” Lacey told Guardian Australia via email.

“My heart sank,” said Lacey. “When I arrived and began collecting all the dead bodies I was in shock.”

“Over the years I have rehabilitated and released large numbers of galahs in and around Parkes,” she said. “As a wildlife carer my focus is always on rescuing live birds and after collecting body after body and witnessing pairs of deceased galahs huddled together beneath shrubs and trees and imagining their suffering I felt quite broken.”

The galahs’ deaths are being treated as a suspected poisoning but have not yet been confirmed by toxicology investigations by the EPA. “The EPA has no indication of deliberate misuse of pesticides in Parkes,” it said in a statement.

“The EPA will continue to take reports and monitor the use of pesticide to minimise unintended impacts on wildlife.”

When used properly, zinc phosphide – a widely used rodenticide – should not pose a risk to native birds, said Steve Henry, a researcher at the CSIRO.

Used according to label, the maximum concentration of zinc phosphide should be 1kg a hectare, equating to three small grains per square metre.

“If it’s used properly, it should be a very, very low risk that a bird should find one of those grains of zinc phosphide and eat it,” said Henry.

“Why birds start falling out of the sky is [that] people do inappropriate things,” said Henry. “They either use the bait in a way that’s not described on the label, or people make up their own baits.”

“This nearly always happens when there is a [mouse] outbreak.”

The concerning reports of bird deaths come ahead of a potential wider rollout of bromadiolone, a poison described as “napalm” for mice, which is currently restricted to use inside and around dwellings.

The NSW government has sought emergency approval from the Australian Pesticides and Veterinary Medicines Authority to distribute 10,000 litres of bromadiolone to affected areas. If approved, farmers would be allowed to use bromadiolone-treated grain around the perimeter of crop fields.

Unlike zinc phosphide, bromadiolone remains in the mice’s bodies after death, and experts have warned that it could poison carnivorous native wildlife who consume the them – including fish, as shown in disturbing videos of Murray cod regurgitating mice this week.

Henry believes mouse numbers will plateau through the winter. “They’ll basically stop breeding,” he said. “But the level of overwinter survival will determine the magnitude of the mouse population when they start breeding next spring.”

“There’s a really good chance that there’ll be an average crop this year, so that means there will be plenty of food and shelter for those mice that survive through winter.”

“On the back of the drought and the bushfires this plague is the final straw for our farmers and rural communities as well as the local wildlife,” said Lacey. “I just hope it ends as quickly as it started before even more harm is done to everyone involved.”

This article was first published by The Guardian on 4 June 2021. Lead Image: CSIRO’s Steve Henry says poison used to control mouse plague should pose low risk to birdlife but ‘people do inappropriate things … This nearly always happens when there is a [mouse] outbreak.’ Photograph: Kelly Lacey.