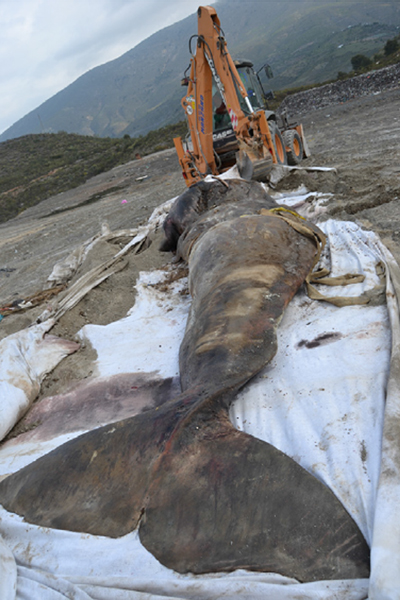 What do children’s toys, balloons, mattresses and plastic bags have in common? They can, along with more non-biodegradable pollutants, be found in the belly of a sperm whale, the topic of a new study in the Marine Pollution Bulletin.

The same whale that swallowed Jonah from the Bible, Geppetto from Collodi’s Pinocchio, and the crew of the Pequod from Melville’s Moby-Dick is now swallowing trash from the Spanish-Mediterranean coast, and in the Strait of Gibraltar.

In a study that took place in the spring of 2012, Spanish scientists preformed an in-depth autopsy on 10 meter (almost 33 foot) long whale found on a beach in Granada, Spain. The study also published a table of all known marine pollution found in whales, from studies from 1903 to present.

The study, released by Renaud de Stephanis and his team, blames the death of the studied sperm whale on the rapidly growing greenhouse industry surrounding the Mediterranean Basin.

“These animals feed in waters near an area completely flooded by the greenhouse industry, making them vulnerable to its waste products,” writes de Stephanis in his paper. “Interestingly, most types of these plastic materials have been found in the individual examined, starting with two flowerpots. The main debris found in the animal was identified as the plastic cover material of greenhouses.”

The results can be brutal, too; de Stephanis’ study describes deaths from, “gastric rupture following impaction with debris, which added to a previous problem of starvation.” In de Stephanis’s whale alone, the researchers found almost 40 pounds of 59 different plastic items.

De Staphanis and his team demand further studies in the region on marine pollution, as no real data on the subject exists. Stricter, more efficient methods of waste-disposal for the Mediterranean agricultural industry are also underlined. Although its possible that the death of this one studied sperm whale is an anomaly, the study isn’t optimistic, pointing out that more than 14 sperm whale bodies had been recorded in the region since 1996. The study is clear: “These debris issue should have a relevant section in the conservation plan of the species.”