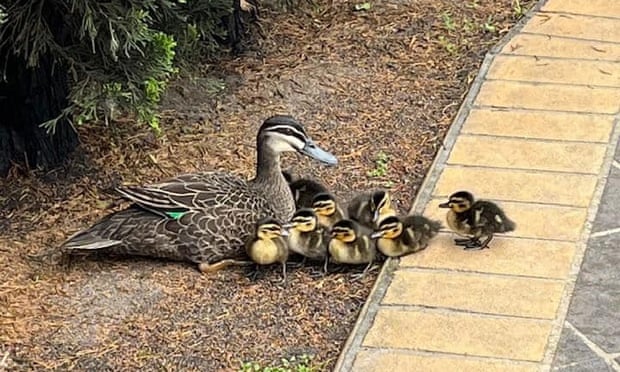 Pacific black ducks are common in Melbourne parks. They’re beautiful birds with chocolate plumage and brown heads bisected by toffee-coloured stripes. But last weekend, I had no time to appreciate their looks when I heard quacking coming from outside my flat.

It was a Pacific black duck with eight ducklings. Half a dozen people herded them around the garden, taking photos with their phones. I called rescue group Wildlife Victoria and their advice nearly floored me.

“It sounds counterintuitive,” said Erin. “It sounds unkind. But the best thing you can do is let the duck be. Let it go where it wants to. Just try to keep them all safe.”

According to the rescue group, ducks can lay eggs up to 5km from their wetland homes, in suburban backyards or “wherever they can find a nice, safe place”.

The duck was about to demonstrate unerring instincts. Hatched somewhere near my place, the young had to be walked to water right away.

This was a “march of the ducklings”, a life and death hike. For the next three hours, the odyssey unfolded.

First, the duck crossed our street, leading its tiny, fluffy offspring beside a drain into which two promptly fell. In the concrete chamber, they cheeped in panic.

Happily, someone helped haul up the grate. I fetched my fishing net and scooped out the downy little scraps. They trundled to their siblings on miniature webbed feet.

The mother took off, leading the way south. She reached a T-intersection, crossed, headed west then made a left. They waddled south again before following the curve of the railway line all the way to Elsternwick station.

I covered drains with my fishing net so the little ones didn’t fall in. When Mum crossed roads, I stood in the middle

The parade continued as the tiny ducklings – weighing around 40 grams each – tumbled along, falling back then racing to catch up. At one point, several plunged into a puddle, gliding like seasoned swimmers – though they can’t have been more than a day or two old.

Now and then, they stopped to graze on grassy nature strips and guzzle water from the gutters.

As for me, after an hour, I was exhausted. It was harrowing to keep up, but I was also fending off traffic – mercifully light on the quiet backstreets.

Didn’t the duck know the peril they were in? It walked doggedly on to roads and I kept my distance lest I accidentally ushered it the wrong way.

As they reached the pocket park known as Elsternwick Plaza, it seemed, at last, there was method in her madness: she was headed for the local wetlands.

Later, I learned ducks have an “inbuilt GPS” – an aerial map in their heads. The duck knew where it had to go. Ducks may also be guided by the smell of water.

Locals helped shepherd them across Glenhuntly Road, then left me to it. But Nepean Highway lay ahead, with its four lanes of traffic pounding along at 80km/h. This little black duck was intent on her task, oblivious to the risk.

A young man in a Coles uniform quickly sized things up. Using his considerable height, he helped stop the two southbound lanes. Even so, our hearts were in our mouths as the duck advanced into the city-bound traffic. After all the previous near-misses, this looked horribly like the end of the line.

Luckily, modern cars have excellent brakes. The ducks made it and, after a second crossing of Glenhuntly Road, the high-stakes drama ended at Elsternwick Park Nature Reserve.

The ducks had travelled 3km from my home to safety. Why would they have evolved to endure such a difficult start to life? Why do some ducks breed so far from water?

Birdlife Australia’s Sean Dooley says the parent may have been inexperienced and chose the wrong place to nest, or that its choice “speaks of the paucity of local nesting sites”.

Ducks must live in water but those breeding in our suburbs are in terrible danger as they travel to it. We need to understand them better. They’ve been here for millennia, before houses, roads and cars. Before deadly drains.

Sadly, the problems for ducks are increasing.

Last year, Wildlife Victoria volunteers helped a staggering 7,000 ducks – an increase of 25% on 2019 numbers. Another group, Nigel’s Animal Rescue, receives three or four calls to help ducks every day in the spring.

One in five Victorians can’t name a single native duck species, but that doesn’t matter. Anyone can help ducks get to safety; it starts with paying attention.

Looking back, I’m amazed the ducks survived. More so that I risked my life for them. Improbably, I became as determined as a Pacific black duck on a critical journey, marching her babies to water.

Every spring, there’s a viral video on social media. Someone’s stopped their car and parked across a busy road, letting a duck and her ducklings cross. I’m here to tell you: that’s not the end of it, not in the least.

This article by Debbie Lustig was first published by The Guardian on 6 November 2021. Lead Image: ‘The duck was about to demonstrate unerring instincts. Hatched somewhere near my place, the young had to be walked to water right away.’ Debbie Lustig is a Melbourne writer, birdwatcher and occasional wildlife rescuer.