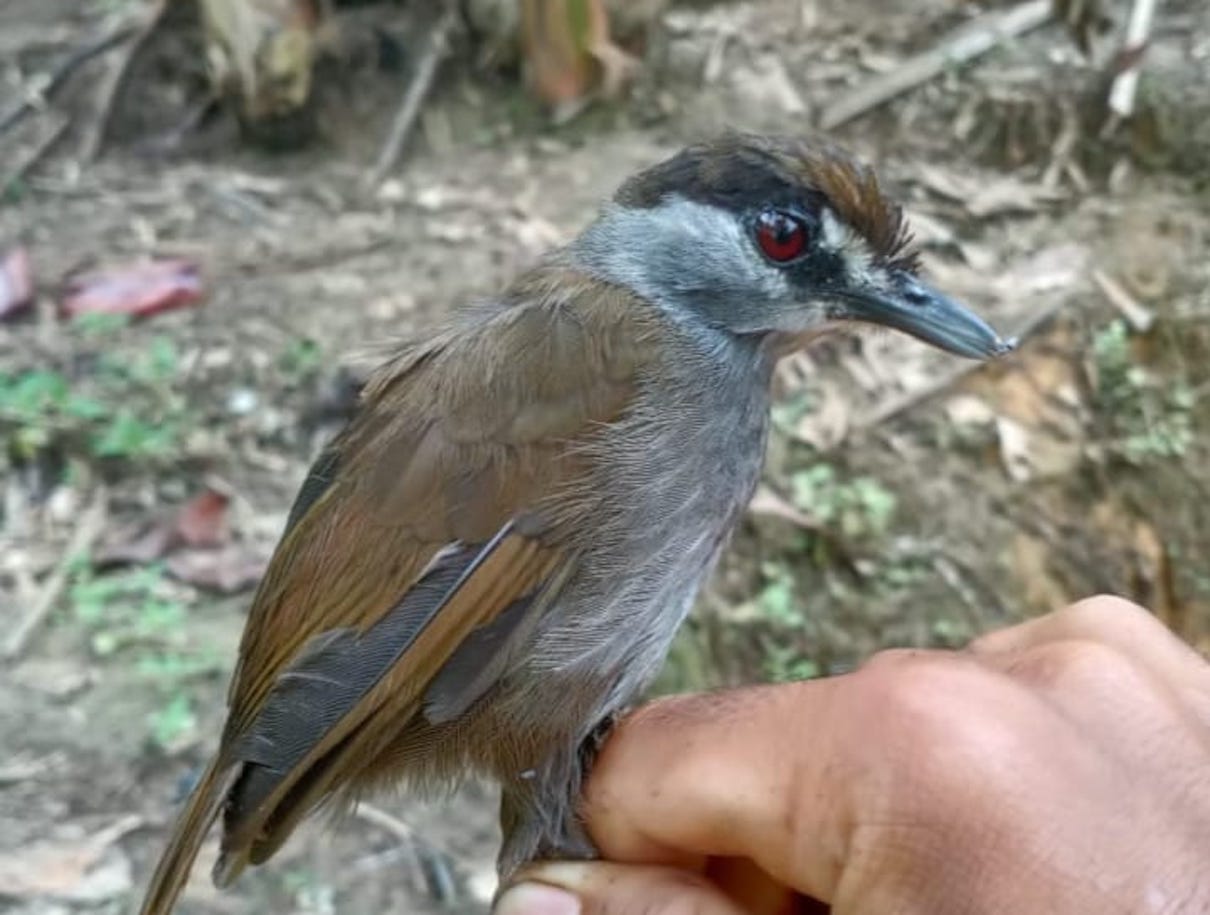 Three years ago, Panji Gusti Akbar was flipping through the pages of Birds of the Indonesian Archipelago when he came across a photo of a bird with brown wings and a black stripe across its brow, appropriately named the black-browed babbler (Malacocincla perspicillata).

On the map beside the bird, there was a question mark, indicating that no one knew where the species lived. In fact, this bird hadn’t been sighted for the past 172 years.

“I just had some sort of feeling that, ‘it must be nice to be the one who finds it,’ but just forgot about it,” Akbar, an ornithologist who works at the tourism company Birdpacker Indonesia, told Mongabay.

Then, in October 2020, Akbar received a message from a colleague on WhatsApp with a picture of a living bird with brown wings, a gray breast and a distinctive black stripe on its brow. Two men had accidentally caught it in South Kalimantan province, in Indonesian Borneo, and had taken photos of it before releasing it unharmed.

Akbar flipped through his entire field guide, but only found one bird that matched the picture on his phone: the black-browed babbler. But at first, he had trouble believing what he was seeing.

“I contacted as many leading ornithologists as possible, and they all agreed that there is no other bird that [it] looks [like] other than a black-browed babbler,” Akbar said. “It just blew my mind.”

There is only one specimen of the black-browed babbler, which was collected by German naturalist Carl A.L.M. Schwaner sometime between 1843 and 1848. The specimen, which is the holotype for the species, is currently housed at the Naturalis Biodiversity Center in the Netherlands.

“We suspect that this bird might actually have been around this area for quite a long time,” Akbar said. “It’s just that there is nobody coming to see them … nobody who knows how to identify birds.”

Akbar and several colleagues published a report on Feb. 25 in BirdingASIA about the rediscovery of the black-browed babbler. It offers new information about the physical appearance of the bird, which has slightly different colors on its iris, bill and legs compared to the holotype. This is probably because the specimen had become discolored during the taxidermy process, Akbar says.

Muhammad Suranto, one of the men who discovered the bird, said he was stunned to learn that he’d stumbled upon such an elusive species. “I didn’t expect it [to be] that rare or that it had been missing for such a long time,” he told Mongabay in an email, translated by Akbar.

Right now, nothing is known about the species’ population or whether it is currently threatened with extinction. However, Teguh Willy Nugroho, an ornithologist who works in Sebangau National Park in Kalimantan and co-authored the report, says he is fairly confident that the bird has a limited distribution in the area, and would face local threats such as poaching.

The scientists hope to conduct further research on the bird, whose conservation status is currently listed as “data deficient” by the IUCN. They are also working on another report on the species, which may be published later this year.

“This is one of the most important findings for Indonesian natural history, especially in ornithology,” Teguh told Mongabay through a translator. “I want to share the information as much as possible so that people can pay more attention to its survival.”