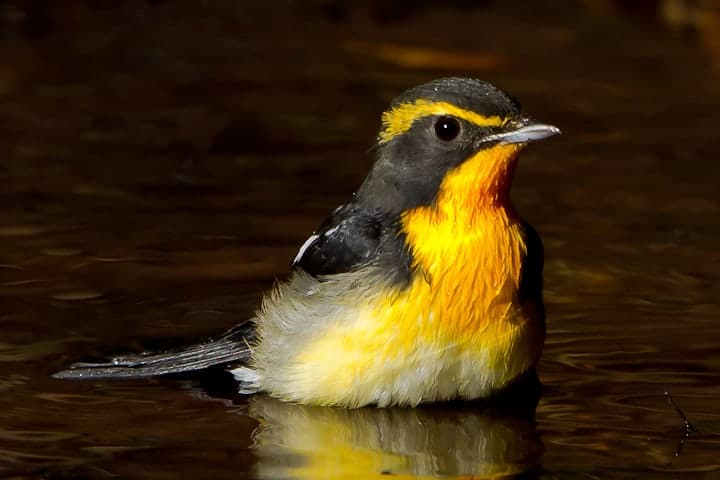 One of the most sought-after species for visiting birders to the East Asia region is the brilliantly coloured Narcissus Flycatcher. Their range is quite narrow, and they are probably one of the harder species to see while breeding (most often they are more closely observed on migration to and from Southeast Asia). Fortunately at the mountain pond near where I live in Japan, there is a pair that breed each year, along with a pair of Blue-and-white Flycatcher, a pair of Copper Pheasant and a pair of Japanese Thrush. Because of the location, I am able to view them at distances of around 10 metres or less and in a very pleasant environment.

Although tiny (just 13 – 13.5 cm), the male is instantly recognisable as he flies quickly to the pond vicinity – just a flash of bright orange and yellow signals his arrival. He will usually sit in dense foliage just on the edge of the pond area and wait until he is comfortable with the situation. Narcissus Flycatchers are quite shy, and any strange noise will make them retire into the dark areas of the forest. If he is confident in his safety, he will drop quickly into the pond area, drink and bathe nervously, and then just as quickly disappear again. On rare occasions he might perch in the open for a little while and have a second round of bathing, but usually he just visits once briefly in a morning and maybe again in the afternoon.

Usually the female is braver and more confiding, although she follows the same cautious approach when first arriving to drink and bathe. But she usually bathes for longer and just flies to an open perch to rest a little in between trips into the water. The female usually appears several times a day, whereas the male might only appear once or twice. Although they are shy, they are not as shy as the other breeders mentioned above, particularly the Copper Pheasant, which won’t come anywhere near the pond if there is obvious human presence anywhere along the mountain trail. The male Japanese Thrush can sometimes be surprisingly confiding, and often his presence will cause smaller birds to vacate the pond area. The female, however, is extremely shy, as is the pair of Blue-and-white Flycatchers.

But for me the definite highlight of a morning or afternoon at the pond is (other than the male Copper Pheasant) the male Narcissus Flycatcher. I consider it to be one of the most beautiful birds in East Asia, particularly when viewed up close and personal in a dark, shaded environment that sets off its vivid yellow and orange hues. In a few weeks, if their breeding has been successful a couple of juveniles will start venturing to the pond as well!

All images copyrighted © John A. Wright. All Rights Reserved.

Interested in birding Japan? Check out www.johnandrewwright.com for photos and information on the different species you can see at different locations and times of year, as well as details on guiding services. Feel free to contact me for itineraries for any time of year – I specialise in getting visiting birders and wildlife photographers the best possible views of the species that are seeking!