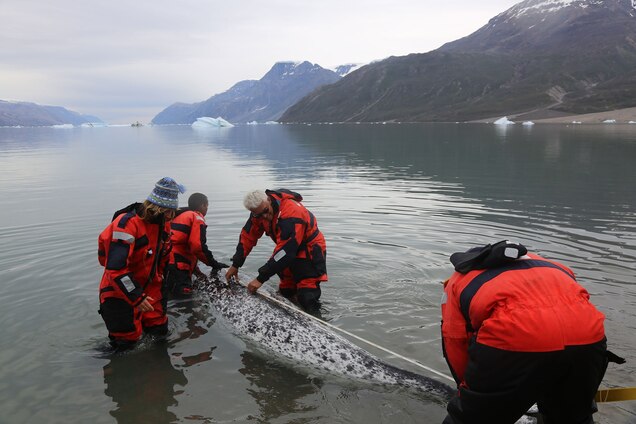 Normally when an animal is scared, it either remains very still and slows its heart rate and metabolism in hope that danger will pass—like a possum playing dead, in an extreme case—or the body revs up to power a “fight or flight” response.

But when narwhals get caught in fishing nets, surprisingly, they do both. Even as the narwhals pump their fins and tails as fast as they can to escape, their heart rates plummet to just three to four beats per minute, scientists report Thursday in the journal Science.

For reference, that’s about as many beats per minute as a ground squirrel while it’s hibernating.

It’s the first time anyone has measured heart rate and performance at the same time for a diving cetacean, the group that includes whales, dolphins, and narwhals, says Terrie Williams, a wildlife ecophysiologist at the University of California, Santa Cruz and lead author of the new study.

The narwhals’ super-slow heartbeats were a surprise because animals need to pump enough blood around the body to supply oxygen to the brain and stay warm, Williams says. What’s more, the lack of blood flow could prevent the narwhals’ bodies from removing nitrogen, which leads to decompression sickness, also known as the bends.

“These are all things that the cardiovascular system is doing for these animals,” says Williams.

“And now we’ve got it in a pause, a ‘cardiac freeze,’ and what I don’t understand is how these tissues are able to maintain function.”

Narwhals have always been a bit of a mystery. It’s thought that there may be as many as 173,000 narwhals on Earth, but because of the animal’s remote habitat and cryptic nature, no one is really sure.

For starters, the animals live entirely above the Arctic Circle and tend to hang out in places where sea ice is so thick that it’s nearly impenetrable to ships. They spend much of the day diving to depths of 4,500 feet or more where they hunt for halibut, cod, shrimp, and squid.

No one has ever seen a narwhal eat, by the way. Scientists know about their menu only from studying the gut contents of narwhals killed by local hunters.

In fact, the current study probably wouldn’t exist without indigenous hunters, since Williams and her coauthors relied on cooperation from the people of Ittoqqortoormiit, Greenland, to get access to the narwhals caught in their nets. The local people would have normally harvested these animals, but instead agreed to let the narwhals go so they could be studied.

Before each animal was released, the scientists used suction cups to attach heart rate monitors and motion sensors called accelerometers to the entangled narwhals.

Williams suspects that other deep-diving cetacean species may also use this bizarre escape response when they become stranded. If these animals also experience a cardiac freeze—either as the result of noise pollution, entanglements, or other human impacts—then perhaps the animals’ brains aren’t getting enough oxygen. This might explain why some whales strand themselves again even after rescuers help them back into the waves.

“I don’t have the proof,” says Williams, who published a paper earlier this year that showed noise pollution increases the amount of energy beaked whales expend on their dives. “But we are certainly seeking the proof.”

“Until recently the Arctic has not been a place with a lot of traffic of any kind, and narwhals have existed relatively undisturbed and somewhat insulated from development,” says Kristin Laidre, a research scientist at the University of Washington’s Polar Science Center who was not affiliated with the new study.

But that is changing as the Arctic warms and sea ice disappears. And unfortunately for the sea unicorns, things may be getting worse before they get better.

“This means increased shipping, new shipping routes, or exploration and development of offshore oil and gas deposits,” says Laidre. “All of this means more overall disturbance for narwhals, and based on the results presented here, more physiological stress.”

This article was first published by National Geographic on 07 Dec 2017. Lead Image: Scientists measure the length of an adult narwhal for a study of the animals’ response to danger. Narwhals’ heart rates plummet to a few beats per minute while they dive deep to escape fishing nets. Photograph by M.P. Heide-Jorgensen.