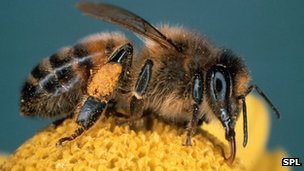 Commonly used pesticides are damaging honey bee brains, studies suggest. Scientists have found that two types of chemicals called neonicotinoids and coumaphos are interfering with the insect’s ability to learn and remember.

Experiments revealed that exposure was also lowering brain activity, especially when the two pesticides were used in combination.

The research is detailed in two papers in Nature Communications and the Journal of Experimental Biology. But a company that makes the substances said laboratory-based studies did not always apply to bees in the wild.

And another report, published by the Defra’s Food and Environment Research Agency (Fera), concluded that there was no link between bee health and exposure to neonicotinoids. The government agency carried out a study looking at bumblebees living on the edges of fields treated with the chemicals.

Honey bees around the world are facing an uncertain future. They have been hit with a host of diseases, losses of habitat, and in the US the mysterious Colony Collapse Disorder has caused numbers to plummet. Now researchers are asking whether pesticides are also playing a role in their decline.

To investigate, scientists looked at two common pesticides: neonicotinoids, which are used to control pests on oil seed rape and other crops, and a group of organophosphate chemicals called coumaphos, which are used to kill the Varroa mite, a parasite that attacks the honey bee.

Neonicotinoids are used more commonly in Europe, while coumaphos are more often employed in the United States. Work carried out by the University of Dundee, in Scotland, revealed that if the pesticides were applied directly to the brains of the pollinators, they caused a loss of brain activity.

Dr Christopher Connolly said: “We found neonicotinoids cause an immediate hyper-activation – so an epileptic type activity – this was proceeded by neuronal inactivation, where the brain goes quiet and cannot communicate any more. The same effects occur when we used organophosphates.

“And if we used them together, the effect was additive, so they added to the toxicity: the effect was greater when both were present.” Another series of laboratory-based experiments, carried out at Newcastle University, examined the behaviour of the bees.

The researchers there found that bees exposed to both pesticides were unable to learn and then remember floral smells associated with a sweet nectar reward – a skill that is essential for bees in search of food.

Dr Sally Williamson said: “It would imply that the bees are able to forage less effectively, they are less able to find and learn and remember and then communicate to their hive mates what the good sources of pollen and nectar are.”

She said that companies that are manufacturing the pesticides should take these findings into account when considering the safety of the chemicals. She explained: “At the moment, the initial tests for bee toxicity are giving the bees an acute dose and then watching them to see if they die.

“But because bees do these complex learning tasks, they are very social animals and they have a complex behavioural repertoire, they don’t need to be killed outright in order not to be affected.”

The European Commission recently called for a temporary moratorium on the use of neonicotinoids after a report by the European Food Safety Authority concluded that they posed a high acute risk to pollinators.

But 14 out of the 27 EU nations – including the UK and Germany – opposed the ban, and the proposal has now been delayed. Ian Boyd, chief scientist at Defra, said: “Decisions on the use of neonicotinoids must be based on sound scientific evidence.”

He said that the results of the Fera bumblebee study suggested that the extent of the impact might not be as high as some studies had suggested – and called for “further data based on more realistic field trials is required”.

Dr Julian Little, communications and government affairs manager at Bayer Crop Science Limited, which makes some of the pesticides, said the findings of laboratory-based studies should not be automatically extrapolated to the field.

“If you take an insecticide and you give it directly to an insect, I can guarantee that you will have an effect – I am not at all surprised that this is what you will see,” he explained. “What is really important is seeing what happens in real situations – in real fields, in real bee colonies, in real bee hives, with real bee keepers.”

This article was written by Rebecca Morelle and published by BBC News Science and Environment.

Insecticides by definition are chemicals used to kill insects. Nearly all insecticides have the potential to significantly alter ecosystems; many are toxic to humans; and others are concentrated in the food chain.

If mankind continues to use insecticides on a mass scale, not only essential insect species such as bees will be destroyed but also the human race!

speaking of neonicotinoid pesticides – “If you take an insecticide and you give it directly to an insect, I can guarantee that you will have an effect – I am not at all surprised that this is what you will see,” he explained. “What is really important is seeing what happens in real situations – in real fields, in real bee colonies, in real bee hives, with real bee keepers.”. This is outrageous. We should put entire hives at risk to prove the harm of these poisons? Put it in a 'real' field and see what happens? What insanity and… Read more »