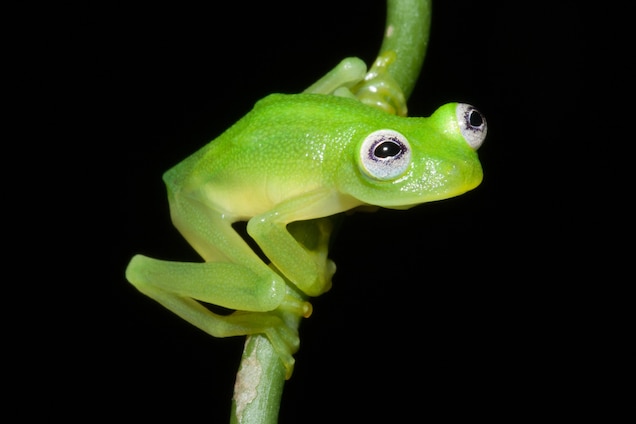 The lime-green amphibian, which took the Internet by storm this week, has bulging white eyes with perfect black pupils, much like Jim Henson’s musical puppet.

But this frog can’t carry a tune. In fact, it has a long whistle like that of an insect, which, according to a new study, may be why scientists didn’t notice it for so long – Costa Rica’s last glass frog discovery occurred in 1973.

The glass frog’s name originates from its translucent, organ-revealing bellies—though the lack of pigmentation is still a mystery to scientists.

Their green coloration, on the other hand, helps the nocturnal frogs stay camouflaged on the undersides of leaves during the day.

The new frog may look like Kermit, but it’s not quite as cuddly: Male glass frogs are very territorial, and will grapple fiercely with other males who trespass on their territory, says Andrew Crawford, a batrachologist at the University of Los Andes in Colombia who wasn’t involved in the new research.

The newfound species inhabits eastern Costa Rica’s mountainous forests, which range between 1,300 and 2,500 feet (400 to 800 meters)—prime territory for amphibians, according to biologist Steven Whitfield, who studies frogs in Costa Rica.

It’s also the altitude at which the deadly chytrid fungus is most widespread. The fungus, which attacks amphibian skin, has resulted in several frog species disappearing from Costa Rica and worldwide since the 1980s, says Whitfield, a National Geographic grantee who was also not part of the new study.

Frogs are also threatened by habitat loss due to deforestation, adds Crawford.

Considering these threats, finding a real-life Kermit is even more special.

Says Whitfield: “It’s pretty cool to see that they’ve found a new species, when there are so many that may have been lost.”