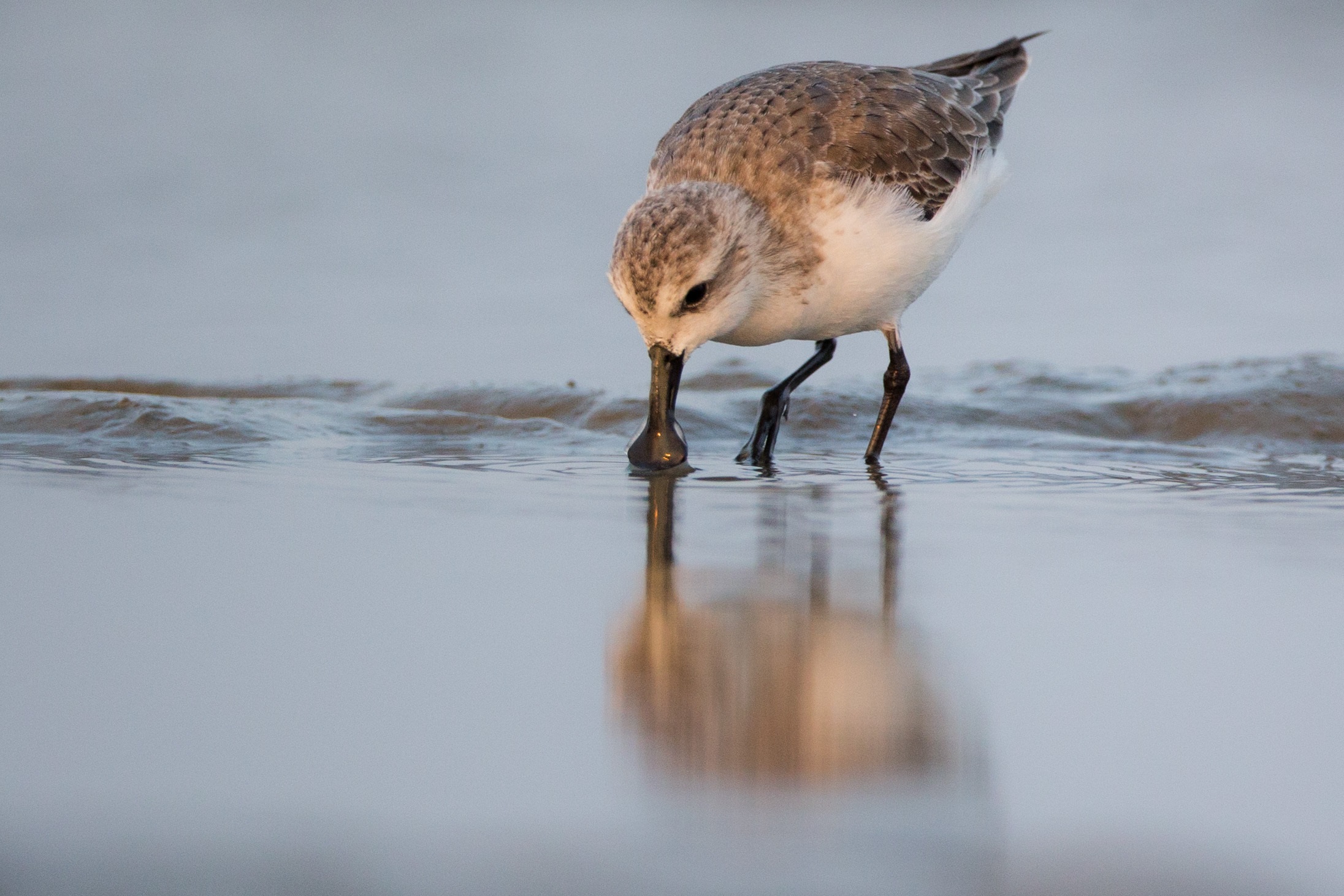 Habitat loss and climate change are often blamed for the decreasing numbers of migratory shorebirds in a major flyway in the Asia-Pacific region in recent years. But it might be time to add another likely suspect: hunting.

More than 50 million waterbirds from more than 250 different populations use the East Asian-Australasian Flyway (EAAF), a major migratory corridor that sees birds crossing 22 countries — from the Arctic across East Asia until Australia — in a journey that covers a treacherous 25,000 kilometers (15,500 miles).

At least 32 globally threatened species and 19 near-threatened species use this flyway once the wintering season comes. It’s also the most threatened bird migration corridor in the world: U.K.-based BirdLife International has recorded a dramatic decline among migrating birds in the flyway, with the latest estimates showing that populations have fallen by 61% among waterbird species.

Previous studies point to habitat loss driven by development infrastructures, which is most notable in China and the Korean Peninsula, as main factors for the plummeting population of migratory birds. This is on top of erratic weather patterns and predators, including human hunting, which pose challenges to a migratory bird’s annual flight.

But a new study, published in the June 2020 edition of Biological Conservation, shows that hunting might have a bigger impact than expected — or recorded.

Hunting, through shooting, trapping and poisoning, among others, has long been recorded in the region. But its scale and impacts on the flyway as a whole have not been thoroughly analyzed. This study does just that: it attempts to fill in the knowledge gap and give a clearer picture of the extent of human hunting on the birds in the flyway.

“While hunting has always been known to occur, its scale and significance were unknown prior to this study, and it’s clear that hunting has likely contributed to declines of migratory shorebirds in this region,” lead author Eduardo Gallo-Cajiao, from the University of Queensland in Australia, says in a statement.

“To address hunting from a conservation perspective, we need to know the extent of it across the entire flyway,” he tells Mongabay. “For instance, we need to know what the total level of take is on an annual basis for each species, so we can assess whether hunting is sustainable or not.”

To make this happen, Gallo-Cajiao and 15 other researchers dug through hundreds of journals, papers and published literature from the 22 countries in the flyway. It’s through this massive literature analysis that they discovered evidence of pervasive hunting practices in the flyway since the 1970s. Even though records in each country are scant and not enough to establish if hunting is sustainable or not, these hunting practices altogether could be contributing to a massive decline in the bird population.

They went through 107 documents from 165 locations across 14 countries, including journals, books and written documentation that recorded at least 46 avian species in the hunting list. In the study, Gallo-Caijao and his team decided on a bookmark year: 1970, the start of a pivotal era that saw international policy frameworks for conserving migratory shorebirds emerging in the Asia-Pacific region.

Records before 1970s were classified under historical hunting, while those from the 1970s until December 2017 were tagged as contemporary hunting. Qualitative narrative analyses were done for historical records, while a combined methodology worked for contemporary records.

But records, as the team would find out, are like a series of jigsaw puzzles, says Gallo-Cajiao, and sometimes the whole picture isn’t as clear yet. While Gallo-Cajiao and his team knew hunting occurs across the flyway, records were scattered and possibly downplayed due to international environmental agreements. Most records don’t identify specific species, or worse, skip records. There’s also no standard metrics to measure the gravity of shorebird hunting.

“In this study, we put all the pieces together, like assembling a huge jigsaw puzzle,” Gallo-Cajiao says. “However, the flyway is an enormous region … with various capacities and motivations for assessing hunting.”

But they were able to establish two things: That hunting has indeed been rampant among the countries within the EAAF, with earliest recorded hunting data going as far back as the late 19th century; and that it might have a much bigger impact in the traveling avian population than expected.

“Even though our study revealed that most records do not allow [us] to determine whether hunting is sustainable or not because of a lack of more detailed information, the resulting jigsaw puzzle revealed that hunting is pervasive enough to warrant further studies and attention by key actors, such as national governments, NGOs, and researchers,” Gallo-Cajiao says.

The study was also able to match bird hunting for specific species in the records, although limited, with the species’ existing conservation status, driving home the point that yes, it’s possible that human hunting during the annual migration season is impacting bird populations.

Among the flocks that frequent the flyway, it’s the shorebirds that are most at risk from hunters. There are 214 species of shorebirds in the world, and 61 of them use the Asia-Pacific flyway, according to the study.

Five threatened shorebirds species appeared in hunting documents. This includes the critically endangered spoon-billed sandpiper (Calidris pygmaea), which breeds in northeastern Russia and spends the winters in Southeast Asia. These small waders are down to a few hundred breeding pairs in the wild and rely on the Yellow Sea intertidal areas as a resting stop on their journeys.

“Many of these fascinating birds are unfortunately declining, with several now on the brink of extinction,” Callo-Gajiao said. “We did not know how many other threatened species could be affected.”

Addressing the hunting issue, however, is as complicated as its records: each country has its own measures, policies and directives when it comes to hunting. Conservation strategies thus need to be localized and in tune with the needs of local hunters, some of who depend on subsistence hunting.

“Hunting of migratory shorebirds is a difficult issue to address, because it involves people who hunt for different purposes across many different countries with different national wildlife laws,” Gallo-Cajiao says. “For instance, some migratory shorebirds are hunted in western Alaska by Native Americans for subsistence, while hunting in Indonesia has involved trade.”

Hunting can be legal for some species in Russia and the United States, Gallo-Cajiao says, while being banned in other countries like Australia. “A one-size-fits-all approach will likely not work for these species,” he adds.

In Southeast Asia, the problem is complicated by the fact that hunting has a domestic and cross-border dimension, says study co-author Ding Li Yong of BirdLife International Asia, based in Singapore. “Livelihoods of some communities rely on harvesting forest products, including wildlife.”

But it’s not all grim. In Bangladesh, the Spoon-billed Sandpiper Conservation Project has rolled out a series of campaigns that saw a drastic drop in trapping practices to improve the remaining number of the species.

“Through the provision of alternative livelihoods, we have seen hunting of migratory shorebirds reduced to very low levels in Bangladesh,” says Sayam U. Chowdhury, assistant coordinator of the conservation project and a co-author of the study. “Ex-hunters are now working as fishermen, tailors, watermelon producers, and guardians of threatened shorebirds.”

Beyond the communities, collaboration among governments, conservation groups and communities is paramount, Gallo-Cajiao says. There’s a need to “develop a coordinated monitoring system of hunting at a flyway scale,” the researchers say. “If hunting still is a significant threat, then overlooking it at a policy level may be a serious conservation oversight.”

The importance of protecting migratory birds, fish and mammals is recognized under the recent United Nations Convention on Migratory Species. In 2017 the East Asian-Australasian Flyway Partnership established a task force specifically on hunting.

“Addressing hunting across such a vast area, as the East Asian-Australasian Flyway, is not easy, but conservation work focused on particular places can yield important small wins,” Gallo-Cajiao says. “The road ahead is still very steep though.”

This article was first published by Mongabay.com on 17 July 2020. Lead Image: A critically endangered Spoon-billed sandpiper (Calidris pygmaea), a small wader that has an estimated less than 500 breeding population in the wild. Image by Yann Muzika.