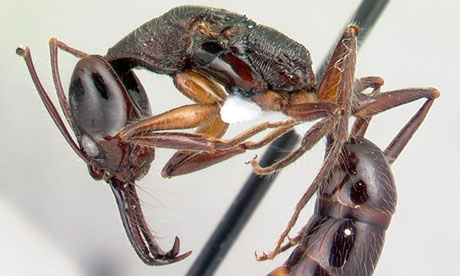 At any given moment, it is estimated that there are about 10,000 trillion living individual ants. Myrmecologists Bert Hölldobler and Edward O Wilson noted that their combined weight would roughly equal that of all living humans combined. Beyond numbers, ants are critically important components of terrestrial ecosystems worldwide. But their evolutionary success is no less impressive.

With more than 14,000 species worldwide they are spectacularly diverse by every measure, from anatomy to social behaviour, their complex colonies having been conceived of as “super-organisms”. Knowledge of their ecological, behavioural and anatomical diversity grows incrementally, in part as a little more of the picture is revealed with each new species discovery.

The genus Anochetus is found in the tropics and subtropics around the globe. Its members are easily recognised, along with the related genus Odontomachus, by their very long, straight mandibles that arise near the midline of the head. These mandibles are highly adapted for their predatory function, opening to 180 degrees when the ant is threatened or in hunting mode and snapping closed to their parallel position. A worldwide taxonomic revision of the genus in 1978 has made it easier to detect new species and 11 have been added since for the neotropics alone, bringing the number for the region to 35. Species of the genus forage and nest in surprisingly diverse habitats. Most nest in the ground or in decaying wood and forage on tree trunks, often at night, above the forest floor. Some in arid areas forage on the ground by day in full sun or partial shade. Yet others are wholly arboreal, although these have been more rarely observed for obvious reasons.

Sampling of wet-forest canopy ants in natural- and agro-ecosystems in north-eastern Brazil turned up a new species of the genus unlike any ever seen before. The new species, Anochetus hohenbergiae, is the largest of any in the genus, with workers greater than 12.7mm in length. In addition to its distinctive size, the new species may be distinguished by its hairiness, a strong concavity along the posterior margin of the head, a row of 13 to 16 teeth on the mandibles, an unarmed propodeum, and a single reduced apical tooth on the petiolar node.

The suddenly narrowed “waist” of an ant would appear to be the beginning of the abdomen, but looks can be deceiving. The first abdominal segment, called the propodeum, is actually fused with and superficially appears to be a part of the thorax, the body region to which legs and wings attach. The narrow petiole is often ornamented with various bumps and teeth.

Although specimens have been turned up since the early 1990s, to date the new species is known only from a few locations in Bahia. An early report was of specimens associated with an unidentified epiphyte about 23m high in a tree. In the years since, only a few specimens had turned up, one foraging on the ground in a cocoa plantation. A recent survey in the same area including native trees and those used to shade cocoa turned up additional specimens of the large new species, all of them in association with epiphytic bromeliads of the genus Hohenbergia affixed to host trees at or above 12m.

Named by Brazilian scientists Dr Rodrigo M Feitosa of the Museu de Zoologia da Universidade de São Paulo and Jacques HC Delabie of the Laboratório de Mirmecologia, Centro de Pesquisas do Cacau, Itabuna, in an article in Annales de la Société Entomologique de France 48: 253-259 (2012), the species epithet refers to its epiphytic host. The new species fits loosely into a group of species known as the emarginatus group, although its phylogeny is not yet clear. Species of this group are mostly arboreal feeders nesting in epiphytes, between palm leaf bases, or in hollow branches. This appears to be the case as well with Ahohenbergiae, which mostly nests among lateral leaves and roots of host bromeliads. The authors suggest that, given the large size of individuals and restricted size of host plants, nests are likely small, perhaps with no more than 100 individuals each. Such small colonies are consistent with other species of the genus as well.

This article was written by Quentin Wheeler for the Guardian UK.

The Genus Anochetus is found in the tropics and subtropics round the world, its members are easily recongnized, along with the related genus Odontomachus……