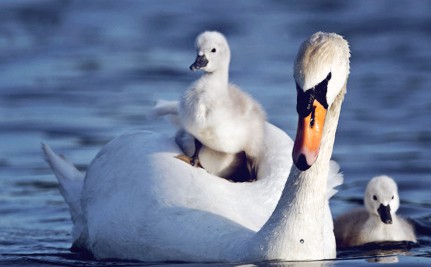 Mute swans in New York will be getting a reprieve from slaughter following major public outcry over the Department of Environmental Conservation’s (DEC) plan to eradicate the state’s population over the next decade, but animal advocates are still concerned about their future.

Earlier this year the DEC publicly announced its plan to list mute swans as a prohibited species and kill the state’s estimated population of 2,200 free-ranging mute swans by 2025. Even though they’ve been here since the 1800s after being imported by Europeans, the department used the justification that they’re an invasive species who pose a threat to native wildlife and are aggressive towards people.

The plan drew the ire of bird lovers, animal advocacy groups and legislators who called on the DEC to drop its plan, which they believed was scientifically flawed and unethical. Advocates for mute swans argued they are being used as a scapegoat for environmental problems their population just isn’t large enough to cause and that the claim that they pose a threat to people is hugely exagerated.

New York Senator Tony Avella said he was “horrified” to learn about the plan and introduced a bill that would impose a moratorium on any killing because eradication was not unanimously supported by wildlife experts and because the DEC didn’t provide any evidence that its plan would actually benefit the environment.

Meanwhile, according to a statement, the “DEC received more than 1,500 comments on the plan from individuals and organizations as well as more than 16,000 form letters and 30,000 signatures on various petitions.” Thanks to public outrage and vocal opposition from animal advocates the agency is backtracking on its plan and said it would consider non-lethal means to achieve the management plan’s intended goals.

“We appreciate the strong response that the draft plan received, and it’s clear that New Yorkers recognize the importance of a comprehensive mute swan management plan that balances the interests of a diversity of stakeholders,” said DEC Commissioner Joe Martens. “The revised plan will seek to balance the conflicting views about management of mute swans in New York.”

However, even with the promise to consider non-lethal alternatives, like egg-oiling or birth control, mute swan advocates aren’t satisfied that the DEC’s revisions will be any less threatening to the future of New York’s beloved mute swans. Friends of Animals has vowed to stay on this issue until the DEC drops its plan entirely and the organization’s sentiments have been echoed by others who want to see these beautiful birds remain as part of the landscape.

“Until their plan doesn’t include eradication, it’s unacceptable, and they’ll be getting the same comments back again,” said Gary Rogers, a spokesman for the Nassau County SPCA.

After the DEC issues a revised plan at some point this spring the public will have another chance to weigh in during a 30-day public comment period.