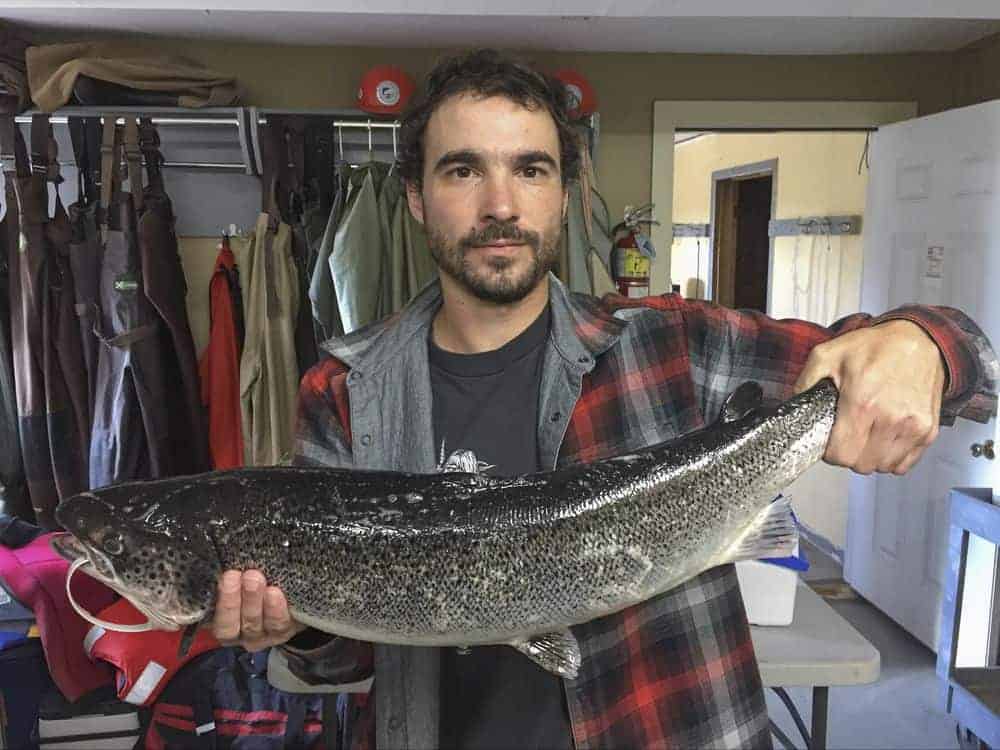 A conservation group’s discovery that no wild Atlantic salmon have returned to a key river in New Brunswick is prompting concern for the fish’s population health in the U.S. and eastern Canada.

The New Brunswick-based Atlantic Salmon Federation has been monitoring the Magaguadavic River for the Canadian government since 1992. The group says this year is the first time since then that no wild salmon have returned to the river to spawn.

Atlantic salmon were once abundant in rivers of New England and eastern Canada, but they’re now endangered or have disappeared in parts of both areas. The U.S.’s National Marine Fisheries Service is in the midst of reviewing the Gulf of Maine’s population, which is listed endangered under the Endangered Species Act.

About 900 wild salmon entered the river to spawn in 1983, and the fact that none returned this year is bad news for the fish’s population in Maine and Canada, said Neville Crabbe, spokesman for the Atlantic Salmon Federation.

“It means for the Magaguadavic River, whatever wild salmon that existed there are now extinct,” Crabbe said. “It affects the good work being done on all the rivers.”

Atlantic salmon populations have suffered due to dams, loss of habitat, pollution, climate change and overfishing. They cannot be legally fished commercially in the U.S., but continue to face fishing pressure from Greenland. The only native populations of Atlantic salmon left in the U.S. are in Maine, though restoration efforts are afoot elsewhere in New England.

Maine’s most active salmon river is the Penobscot River, and returns there have ebbed and flowed over the years, said Dan Kircheis, a fisheries biologist with the National Marine Fisheries Service. Nearly 850 have returned this year, which is an improvement from 261 in 2014, but far less than more than 1,950 that returned in 2009, according to fisheries service statistics.

The disappearance of salmon from the Magagauadavic reflects recent stock assessments that say the river has been “effectively extirpated of wild fish,” said John Kocik, another biologist with the fisheries service.

Canada assessed the Outer Bay of Fundy population of Atlantic salmon as endangered in 2010, Fisheries and Oceans Canada spokeswoman Carole Saindon said. The agency recognizes threats to the fish such as poaching, disease and changing marine conditions and “remains committed to restoring the wild Atlantic salmon runs in Eastern Canada,” she said.

The Magaguadavic River is located about 45 minutes from the Maine border. It feeds into Passamaquoddy Bay, which is home to salmon farming pens and in turn feeds into the Bay of Fundy.

Atlantic Salmon Federation places some of the blame for wild salmon’s struggles off of New Brunswick on salmon farming in the area. Escaped salmon from ocean pens compete with wild fish, and can interbreed with wild fish to yield hybrid offspring that are less fit to survive in the wild, Crabbe said. He described salmon farming as one of the problems affecting fish that humans have the most control over.

Cooke Aquaculture, the biggest player in salmon farming in New Brunswick and Maine, is required to report escapes, and there have been very few in recent years, said Nell Halse, a Cooke spokeswoman.

“It’s not really accurate to portray it as this terrible problem of escapes,” she said. “It’s a very small number of fish.”