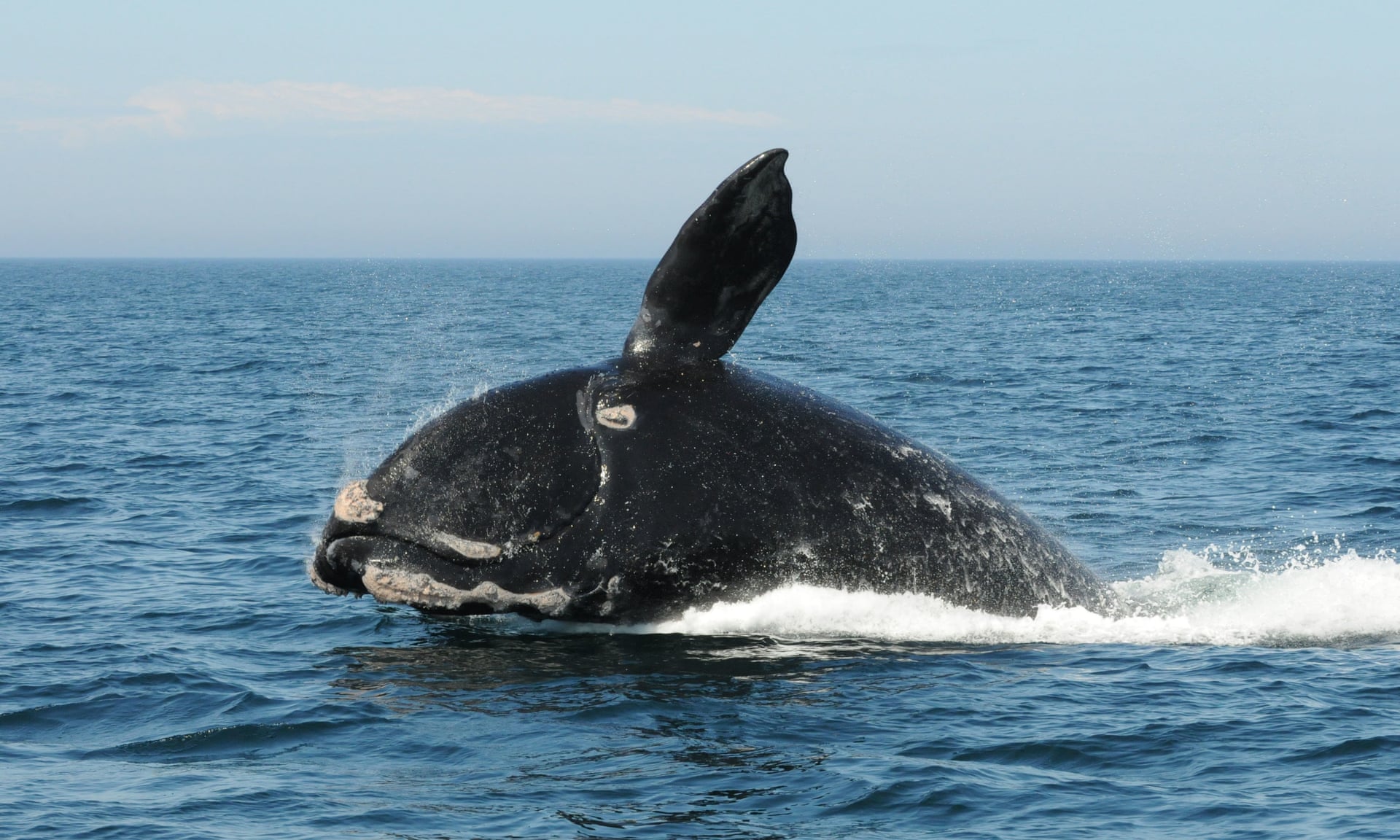 With their population still struggling to recover from over three centuries of whaling, the North Atlantic right whale is now just “one step from extinction”, according to the International Union for the Conservation of Nature (IUCN).

The IUCN last week moved the whale’s status on their Red List from “endangered” to “critically endangered” – the last stop before the species is considered extinct in the wild.

The status change reflects the fact that fewer than 250 mature individuals probably remain in a population of roughly 400. While grim, scientists and conservationists expressed hope that this move may help speed up protections for these dwindling giants.

“As scientists, we’ve been working for many years under the idea that North Atlantic right whales are critically endangered,” said David Wiley, research coordinator for the Stellwagen Bank national marine sanctuary in Massachusetts.

“The good thing about this new designation is it does bring them back front and center. Hopefully that will bring them up to the top of political consciousness.”

Moira Brown, senior scientist at the Canadian Whale Institute, who has been working on right whales for over 30 years, said: “For an organization like the IUCN, which weighs a lot of information when they make these changes, to shift the right whale’s status – it brings international recognition. It’s an added layer of: we’re not just blowing smoke here, this animal is really in trouble.”

Often found leisurely filtering plankton at the ocean surface, the right whale species was once highly targeted by whalers: their slow speed made them easy to hunt, and they float when killed, thanks to thick blubber.

That slow surface feeding today leads to these whales being struck by boat propellers or becoming fatally snarled in fishing gear. According to the IUCN, of the 30 deaths or serious injuries to North Atlantic right whales recorded between 2012 and 2016, 26 were caused by fishing gear entanglement.

As a result, many scientists support stricter regulations on the fishing industry, a topic that draws concern from fishing communities: new regulations could mean fishermen must bear the cost of upgrading gear, and they are often concerned that these changes will also reduce their catch.

The National Marine Fisheries Service’s 2019 attempt to reduce gear in the water led the Maine Lobstermen’s Association to back out of regional protective measures.

“I think it’s sometimes portrayed as: you have whales, or you can have fishing,” said Amy Knowlton, a senior scientist at the New England Aquarium. “What we’re trying to say is you can still fish if you can do it in a safer way for the whales.”

Knowlton noted that the growing entanglement problem may be partially due to stronger ropes adopted in the 1990s, making it harder for whales to break free. She is now encouraging fishermen to use lines with a weaker breaking strength.

Climate change also plays a big role. Since 1990, the North Atlantic right whale’s primary feeding ground, the Gulf of Maine, has warmed three times faster than the rest of the world’s oceans.

The US and Canadian governments enforce seasonal boat speed limits in areas that right whales frequent. But the whales are changing their usual haunts as they seek cooler waters, taking them into places without these speed limits. Warming waters also make it harder for right whales to find food, which could explain their unusually low birth rate.

Additionally, climate change has caused a lobster boom in northern New England and eastern Canada, which has brought more fishing gear into the whale’s habitat.

There is cause to celebrate small victories for right whales, like the birth of 10 calves this season. But these victories often come hand-in-hand with heartbreak: in June, one of those calves was discovered dead of a ship strike off New Jersey.

Overall, researchers are keenly aware that time is not on the whales’ side, as deaths outpace the speed of regulatory action.

“It’s a very slow process, and keeping the public engaged and keeping funding going is tough when you know you’re not going to see results for 20 years,” said Wiley. “That’s not unique to right whales, but we’re living at the moment in time that things either get better or continue to get worse.”

He added: “The fact that our activity is driving them to extinction is something that isn’t acceptable for us as human beings. We’re better than that.”

This article was first published by The Guardian on 16 July 2020. Lead Image: A North Atlantic right whale feeds on the surface of Cape Cod bay off the coast of Massachusetts. Fewer than 250 mature individuals remain in a population of roughly 400. Photograph: New England Aquarium/IUCN/PA.

The human killing machine strikes again. When are we, as a species, going to wake up to the plight of all the other species on the planet that we have used and abused and pushed either into extinction or near extinction? And, more importantly, do something positive about it. Personally, I don’t hold out much hope. Greed and a “couldn’t care less” attitude is a “religion” that trumps all.

Will include this article in our Whale File.