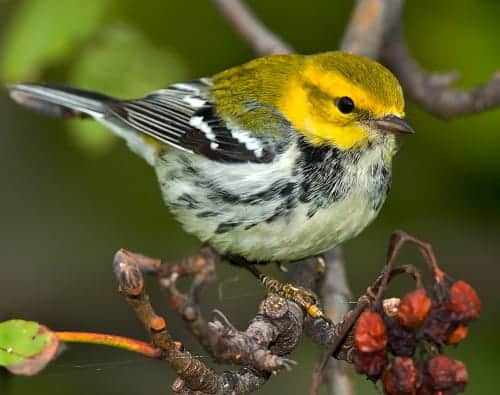 The challenges facing bird conservation can seem insurmountable. And it’s true that some of the threats—climate change, habitat loss—are overwhelming in their scope. But as American Bird Conservancy has been pointing out for years, sometimes even the smallest changes can have enormous effects, from keeping your cat inside to making the right choices when you go to the grocery store.

If you read this blog regularly, you know that one of the easiest and most effective changes you can make for bird conservation is to buy the right kind of coffee. Industrial coffee production, for inexpensive grocery-store brands, has destroyed millions of acres of tropical bird habitat. But buying traditional, shade-grown coffee is a direct investment in bird conservation every time you pour yourself a mug.

ABC is a strong backer of the Bird Friendly (BF) certification program from the Smithsonian Migratory Bird Center. BF is the gold standard in coffee certifications, proven to preserve the highest level of biodiversity on the farms that meet its rigorous requirements.

In April in this blog, Dr. Bridget Stutchbury from York University in Toronto wrote about the importance of Bird Friendly coffee for songbirds like Wood Thrushes, which she’s been studying for years. Her groundbreaking research has shown that shade coffee farms in Nicaragua and eastern Honduras are vitally important for wintering Wood Thrushes and other Neotropical migrants.

Last year, I had a chance to see that for myself, when my wife and I spent a week birding Smithsonian-certified shade coffee farms in Nicaragua, especially in the northwest of the country near the Honduran border.

It was a remarkable experience. To the untrained eye, the landscape that rolled away in every direction—misty, tree-clad mountains—looked like untouched forest. In fact, almost everything we saw was under shade coffee cultivation, the way coffee has been traditionally grown in that part of the world for two centuries, under the canopy of an intact, functioning forest.

Even more remarkable, after more than 25 years birding in the tropics I simply had never seen as many migrant songbirds as we did in there. Great mixed flocks of warblers, orioles, tanagers, vireos, grosbeaks, and other songbirds I knew from back north rolled past us in flickering, colorful movement, in the company of tropical resident birds like squirrel cuckoos and motmots.

During our time there, I met with the leaders of the local coffee cooperative, UCA San Juan del Rio Coco. The co-op’s more than 400 small farmers produce millions of pounds of Smithsonian-certified coffee every year, and they told me they were anxious to learn more about exactly what birds were using their farms.

So this past February, with support from ABC partner Birds & Beans (which sells only Bird Friendly coffee, and buys much of its supply from UCA San Juan), a team of six researchers headed to Nicaragua. Three came from Bridget’s lab at York University and three from Hawk Mountain Sanctuary in Pennsylvania, which is also a big supporter of Smithsonian-certified coffee.

For weeks, the crew rose before daybreak and headed to that day’s slate of farms, scrambling up and down steep hillsides in the early, fog-shrouded light, watching and listening for birds, and meeting with the farmers whose families have been raising coffee in these hills for generations.

They were struck, as I had been, by the stark contrast between the immense green oasis that the coffee-farming highlands represent, and the dry, denuded pastureland and sun coffee plantations surrounding it—land that was largely barren of birds.

“Something that I found unforgettable was the difference between the shade coffee region around San Juan del Rio Coco, which, despite the dryness, was very green, and areas east and west that had been deforested,” said Drew Weber, part of the Hawk Mountain team. “I think it is a pretty telling comparison of how promoting shade coffee agriculture is the only way to go if we expect forests to remain in the region.”

“Having a Black Hawk-Eagle soar right over our heads was a special moment, and both the sight and sound of 50+ Chestnut-headed Oropendolas speeding by en route to their night roost was incredible,” York University team member Garth Casbourn recalled.

But it wasn’t just the birds, as Lee Simpson from Pennsylvania was reminded repeatedly.

“I was amazed to be in a rural community far from the capital where organic farming practices had been embraced,” she said. “Some of the producers whose farms we surveyed were excited to share with us how they keep the water clean after processing the coffee to remove the husks, or how much safer organic methods are for their families. I began to learn how this co-op had come to embrace organic methods.”

That’s one of the strengths of Bird Friendly coffee—that it actually has many strengths. It’s great for the birds, obviously, but the value goes well beyond that.

Without the premium price that certified coffee brings, small farmers and local co-ops like UCA San Juan del Rio Coco might not be able to thrive. The USDA organic certification that the BF label requires safeguards not just the wildlife and the land, but the people who live in such rich, fertile places.

And the Bird Friendly program strengthens communities that might otherwise be forced to make poor environmental choices, or be steamrolled by big agribusinesses moving in and taking over, as has happened in much of the coffee-producing world.

Nor does conservation end when the migrants leave the wintering grounds. Many migratory birds depend on agricultural landscapes here in North America, too, either as stopover habitat in migration, or breeding sites once they arrive—like Bobolinks and Vesper Sparrows in a lush pasture, or Yellow-throated Vireos and Gray Catbirds in a riparian thicket.

That’s why Birds & Beans is also working with Organic Valley, a co-op of more than 1,800 USDA certified organic farms around the country, to replicate the kind of bird surveys that were done in Nicaragua last winter, up here this summer.

As a start, teams will be surveying farms in Minnesota, Ohio, Vermont, and North Carolina to document the bird life on them—stitching together the whole story of these long-distance migrants, and the way that the choices we make as consumers makes a real, serious difference for bird conservation at every step of their life cycle.

Editor’s Note: At American Bird Conservancy, we drink Birds & Beans coffee, and we recommend it for all of the reasons Scott states above. Plus, it’s just plain great coffee. You can get it here.

This article was written by Scott Weidensaul, author of more than two dozen books on natural history, including Living on the Wind and Of a Feather, as well as his newest, The First Frontier. He is also an active field researcher, specializing in the migration of owls and hummingbirds. Weidensaul lives in Pennsylvania.