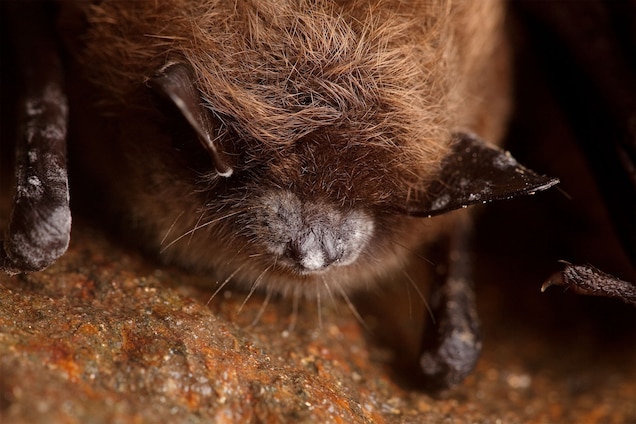 Mysterious cases of white-nose syndrome plague thousands of bats each year, frosting their snouts in toxic, white fungus. But researchers are fighting back against the dark reality—with light.

A new study, published January 2 in the journal Nature Communications, shows that ultraviolet rays, the light source behind black lights and sunburns, irreparably break down the fungus that causes white-nose syndrome in bats. The study results might provide clues for how to stop the deadly pathogen that’s currently on a trajectory to decimate bat species throughout North America.

White-nose syndrome has wiped out an estimated 5.7 million bats since it was first discovered in a New York cave in 2006. The disease, caused by the fungus Pseudogymnoascus destructans, sprouts on the wings, muzzles, and ears of bats hibernating in the cold and dark caves of North America.

The fungus disturbs the bats during their winter hibernation and messes with their bodies’ chemistry. Frequent awakenings caused by the fungus deplete the mammals’ energy and make them too exhausted to survive.

Although the fungus is fatal to many North American bats, their Eurasian counterparts have adapted to the growth after living with it for several million years. (Read: “Deadly Bat Fungus Spreading in U.S.”)

Government and academic researchers alike wanted to find out what causes the P. destructans to turn deadly. In the lab, they compared the fungus’s genes with six of its non-pathogenic relatives by exposing them to DNA-damaging ultraviolet light and studying how they reacted.

All the organisms held up against ultraviolet light, except P. destructans, which broke down under the rays. Only 15 percent of the fungus could withstand low doses of UV light, and moderate radiation destroyed all but 1 percent of it. A few seconds directly in front of a UV light source decimated most of the fungi.

“It’s not something that you would necessarily expect,” says lead author and USDA botanist Jon Palmer.

P. destructans grows in cold, dark caves where temperatures fall between 39 and 68 degrees Fahrenheit. But most organisms that thrive in darkness can still repair DNA damage caused by ultraviolet light, Palmer says.

“It was missing this key enzyme in DNA repair,” he says. “The fungus was very sensitive to UV light.”

Now that scientists know how to break down the fungal pathogen in the lab, the next step is taking the research out to the field.

Marm Kilpatrick, a University of California biology professor who was not involved in the study, was excited to hear about the results when they were first announced at a conference in 2016. He’s curious about how the experiment might play out with real bats in caves rather than specimens in petri dishes.

But, he says, it would be difficult to treat tens of thousands of hibernating mammals at once. The fungus is visible on bats’ noses, but it also grows in the crevices of their closed-up wings. A noninvasive flash of light probably wouldn’t do much to stop the fungus from killing bats.

“It seems potentially exciting probably for smaller-scale treatments,” Kilpatrick says. “You’ll probably have to grab each individual bat and expose them to the UV light.”

Going into colonies and treating them with ultraviolet light multiple times over the course of one winter could disturb the bats’ hibernation, Kilpatrick says. Exhaustion caused by insufficient rest is one of the reasons why white-nose syndrome succeeds in killing the animals in the first place.

Kilpatrick and his colleagues have researched the effect of different amounts of P. destructans on hibernating bats. If a few UV treatments could kill off enough of the fungus before it turns deadly, that could be enough for some bat species to survive the winter.

A Bright Future for Bats?

Following this study, co-author Dan Lindner received a grant from the National Fish and Wildlife Foundation’s Bats for the Future Fund to continue research on how to fight the disease-causing fungus with ultraviolet light. The ongoing study will use light to treat bats naturally infected with P. destructans and see if it helps them survive hibernation.

“We’re very excited about moving this from the lab to actually working with bats,” Lindner says.