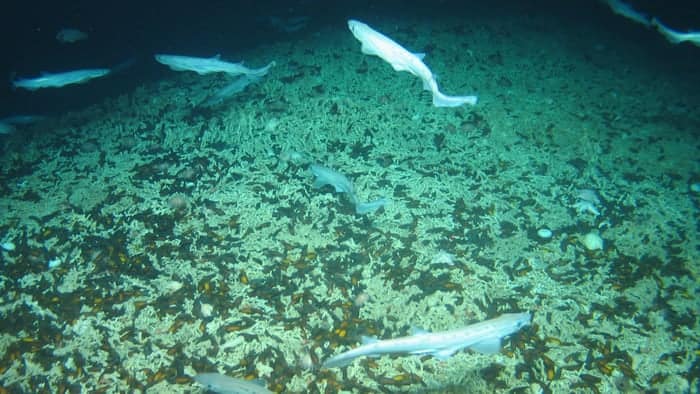 The largest shark nursery to have been found in Irish waters has been discovered among cold-water coral reefs 200 miles west of Ireland.

A remotely operated vehicle surveying the deep ocean floor revealed thousands of egg cases, popularly known as “mermaid’s purses”, deposited on coral skeletons at depths of up to 750 metres (2,500ft).

Video footage from the SeaRover, a survey by Ireland’s Marine Institute and partners including Plymouth University, showed a large school of blackmouth catsharks around the egg cases. The rarer and more solitary sailfin roughshark was also seen moving through the area.

No shark pups were detected during the summer expedition, but the scientists plan to return during hatching season to observe the juveniles, which are vulnerable to predation when they emerge.

The eggs, which are believed to belong to the catsharks, were laid on the remains of dead coral, which provides a kind of protective carpet, preventing them from being swept away by currents.

David O’Sullivan, the chief scientist on the SeaRover survey, said it was “a real eureka moment” when his team suddenly spotted the shark nursery on their HD screens at 3am, towards the end of their three-week survey.

“It was incredible, real David Attenborough stuff. This is a major biological find and a story of this magnitude would have been on Blue Planet if they’d known about it,” he said. “Very, very little is known on a global scale about deep-sea shark nurseries.”

Ireland’s marine territory is 10 times the size of its landmass, with particularly rich marine life found at the edge of the continental shelf, where two-mile deep (3km) canyons rise up to the gently sloping continental shelf.

Both deepwater shark species are on the International Union for the Conservation of Nature’s “red list” of threatened species, with their habitat degraded by trawling. The shark nursery is within one of six offshore EU special areas of conservation where trawling is forbidden. But the dead coral could have been produced by historical or illegal trawling.

The remotely operated SeaRover, funded by the Irish government and the EU, also captured footage of an array of marine life on Ireland’s cold-water coral reefs, including sea urchins, starfish, crabs and smaller fish.

O’Sullivan said the surveyors would go back to the site next summer at different times to see if they can obtain footage of the eggs hatching and try to understand more of the biology and ecology of the sharks in Irish waters.

“There has to be more shark nurseries. The sharks have to be congregating in some areas, but very little is known about the biology and ecology of many shark species,” he said.

This article was first published by The Guardian on 9 Nov 2018.