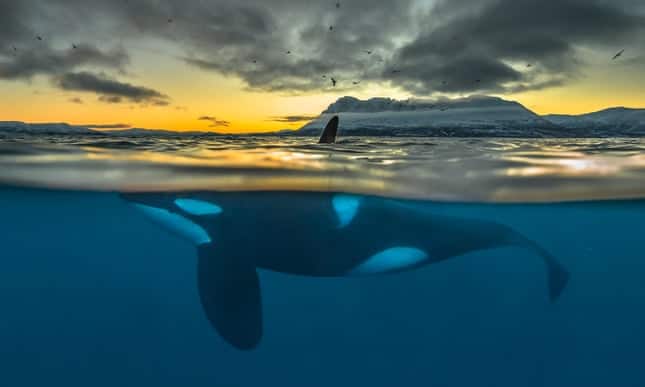 At least half of the world’s killer whale populations are doomed to extinction due to toxic and persistent pollution of the oceans, according to a major new study.

Although the poisonous chemicals, PCBs, have been banned for decades, they are still leaking into the seas. They become concentrated up the food chain; as a result, killer whales, the top predators, are the most contaminated animals on the planet. Worse, their fat-rich milk passes on very high doses to their newborn calves.

PCB concentrations found in killer whales can be 100 times safe levels and severely damage reproductive organs, cause cancer and damage the immune system. The new research analysed the prospects for killer whale populations over the next century and found those offshore from industrialised nations could vanish as soon as 30-50 years.

Among those most at risk are the UK’s last pod, where a recent death revealed one of the highest PCB levels ever recorded. Others off Gibraltar, Japan and Brazil and in the north-east Pacific are also in great danger. Killer whales are one of the most widespread mammals on earth but have already been lost in the North Sea, around Spain and many other places.

“It is like a killer whale apocalypse,” said Paul Jepson at the Zoological Society of London, part of the international research team behind the new study. “Even in a pristine condition they are very slow to reproduce.” Healthy killer whales take 20 years to reach peak sexual maturity and 18 months to gestate a calf.

PCBs were used around the world since the 1930s in electrical components, plastics and paints but their toxicity has been known for 50 years. They were banned by nations in the 1970s and 1980s but 80% of the 1m tonnes produced have yet to be destroyed and are still leaking into the seas from landfills and other sources.

The international Stockholm Convention on Persistent Organic Pollutants came into force in 2004 to tackle the issue, but Jepson said the clean-up is way behind schedule. “I think the Stockholm Convention is failing,” he said. “The only area where I am optimistic is the US. They alone produced 50% of all PCBs, but they have been getting PCB levels down consistently for decades. All we have done in Europe is ban them and then hope they go away.”

The researchers said PCBs are just one pollutant found in killer whales, with “a long list of additional known and as yet unmeasured contaminants present”. Further problems for killer whales include the loss of key prey species such as tuna and sharks to overfishing and also growing underwater noise pollution.

The new research, published in the journal Science, examined PCB contamination in 351 killer whales, the largest analysis yet. The scientists then took existing data on how PCBs affect calf survival and immune systems in whales and used this to model how populations will fare in the future. “Populations of Japan, Brazil, Northeast Pacific, Strait of Gibraltar, and the United Kingdom are all tending toward complete collapse,” they concluded.

Lucy Babey, deputy director at conservation group Orca, said: “Our abysmal failures to control chemical pollution ending up in our oceans has caused a killer whale catastrophe on an epic scale. It is essential that requirements to dispose safely of PCBs under the Stockholm Convention are made legally binding at the next meeting in May 2019 to help stop this scandal.” Scientists have previously found “extraordinary” levels of toxic pollution even in the 10km-deep Mariana trench in the Pacific Ocean.

“This new study is a global red alert on the state of our oceans,” said Jennifer Lonsdale, chair of the Wildlife and Countryside Link’s whales group. “If the UK government wants its [proposed] Environment Act to be world-leading, it must set ambitious targets on PCB disposal and protect against further chemical pollution of our waters.”

The research shows that killer whale populations in the high north, off Norway, Iceland, Canada and the Faroes, are far less contaminated due to their distance from major PCB sources. ”The only thing that gives me hope about killer whales in the longer term is, yes, we are going to lose populations all over the industrialised areas, but there are populations that are doing reasonably well in the Arctic,” said Jepson.

If a global clean-up, which would take decades, can be achieved, these populations could eventually repopulate empty regions, he said, noting that killer whales are very intelligent, have strong family bonds and hunt in packs. “It is an incredibly adaptive species – they have been able to [live] from the Arctic to the Antarctic and everywhere in between.”

He praised the billion-dollar “superfund” clean-ups in the US, such as in the Hudson River and Puget Sound, where the polluter has paid most of the costs: “The US is going way beyond the Stockholm Convention because they know how toxic PCBs are.”

This article was first published by The Guardian on 27 Sep 2018.