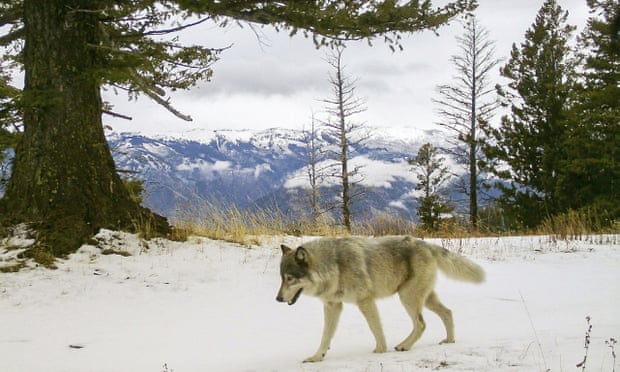 A grey wolf has made the longest tracked journey of any wolf over the last century, venturing hundreds of miles from its home range in Oregon to California’s Sierra Nevada.

The wolf, a male called OR-93, has been fitted with a GPS collar, allowing officials at the California Department of Fish and Wildlife to monitor his progress as he made his way to Mono County, found in the Sierra Nevada mountain range near the border with Nevada.

Conservationists hope that OR-93 may help establish a foothold for wolves in the Sierras. Fewer than a dozen grey wolves now live in California, with the species wiped out in the state in the 20th century due to a government-backed program to eradicate them to protect the livestock industry.

“We’re thrilled to learn this wolf is exploring deep into the Sierra Nevada, since scientists have said all along this is great wolf habitat,” said Amaroq Weiss, senior west coast wolf advocate with the Center for Biological Diversity. “He’s another beacon of hope, showing that wolves can return here and flourish as long as they remain legally protected.”

But others are unhappy over the potential spread of wolves, citing fears they will attack livestock or even people, and elsewhere in the US the killing of the animals has resumed after the federal government, under the Trump administration in January, removed endangered species protections from grey wolves.

Wildlife officials in Wisconsin set a quota of 119 wolves to be killed by hunters between Monday and Wednesday last week but the total of deaths far surpassed this, with 216 shot, in many cases after being tracked by dogs. The hunt was initially planned to last the whole week.

A pro-hunting group successfully took legal action to establish the Wisconsin hunt, with a battle now underway to establish a similar hunt in Minnesota. After grey wolves were given federal protection in the 1970s the species gradually started to recover, with around 2,700 now in Minnesota.

“A healthy ecosystem needs wolves, but the population is just too high,” said Spencer Igo, a Minnesota state representative who has proposed a wolf hunt for this year. “We need to be allowed to manage it properly and responsibly.”

Environmental groups have reacted in horror over the hunts, however, pointing out that the large number of wolves killed in Wisconsin had wiped out years of careful work to restore a species that is beloved and demonized.

“This assault on wolves during their breeding season is a dark expression of our worst instincts as a species, it is predicated on outdated mentalities toward wolves, and it is a practical example of precisely why the federal government was well-justified in shielding wolves from vengeful, politically driven actions and listing them as protected under the endangered species act,” said Wayne Pacelle, president of Animal Wellness Action, who has called on the Biden administration to restore federal protections.

This article was first published by The Guardian on 27 February 2021. Lead Image: A wolf from the Snake River Pack passes in eastern Wallowa County, Oregon in 2014. The Trump administration in January removed endangered species protections from grey wolves. Photograph: AP.