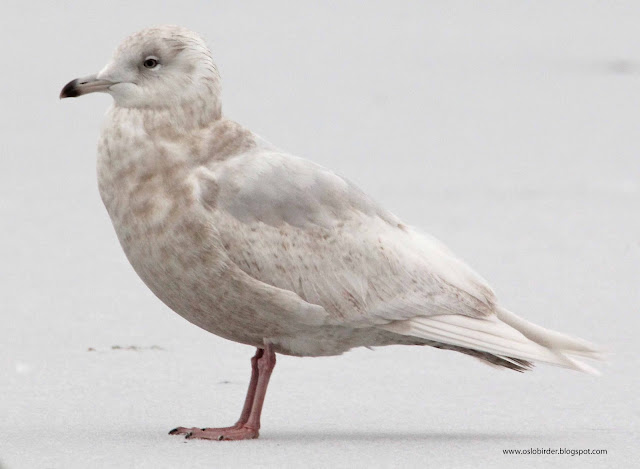 I needed a good day to lift me out of the doldrums currently being caused by a severe case of Trump Fatigue Syndrome and I got it – thank you bird gods! The day started with the Sørkedalen Hawk Owl before 9am. This bird has been seen very occasionally over the last two months (although not by me) and is clearly using a large area in its search for food. It was reported at dusk yesterday though and I figured that it might still be in the same area early this morning and thankfully it was.

Sat on top of the same tall spruce as where I’d seen it on 30 Nov the light was pants but I decided to stick with it in case it hunted. It did indeed hunt unseen by me whilst I was watching a couple of Goldcrests and it took me a while to find the bird again when it eventually flew up from the ground to the top of the spruce. I don’t know whether it caught anything but 10 minutes later if flew down again but pulled up at the last minute and perched low down in a tree.

I hastily made my round to where it was and then watched it plunge down to the ground amongst the trees. It clearly had caught something and flew up onto a low stump where it then proceeded to drop its prey and then flew off without making any attempt to recover it. I went over and found a Common Shrew (krattspissmus) on the ground. It was amongst some branches and may well have been difficult for the owl to recover although it seems such a rookie mistake to drop breakfast (the shrew was well and truly dead) that I believe the owl simply discarded the shrew. Why, I don’t know but it was a tiny creature and maybe they don’t taste so good?

I picked up the shrew and threw it out a few times but without gaining any interest from the owl which then got mobbed by a couple of crows and moved to an even higher spruce. I figured that I needed to be able to move the shrew around if I was going to be able it to use to attract the owl but had no string with me. I drove to nearest shop and they had no string but did have dental floss! On my return though I couldn’t find the owl but do now have a shrew in the freezer for use another time and no excuse not to floss. After this Fornebu was deadly quiet although a flock of 60 Siskin was maybe a sign that this species is on the move as it has been an incredibly scarce species so far this winter.

I checked out the dump again for gulls without finding anything interesting in the few minutes I had with them before something unseen sent they all up in the air. I then retired home and was enjoying some cheddar cheese when I had a text asking me to confirm the identity of an Iceland Gull at Østensjøvannet. Anne Kari Norland had struck gold again! 20 minutes later and I was enjoying this bird too. It sat on the ice looking very at home and joined the local Herring Gulls in scrapping for bread.

The pattern on one of the coverts on the left wing shows this to be the same bird that I have missed in Østfold and Akershus so third time lucky! It was also a large bird being the same size as many of the Herring Gulls so is therefore likely to be a male. Iceland and Glaucous Gulls on successive days in Oslo plus Hawk Owl is definitely what I needed although the optical stabiliser on the bazooka giving it up the ghost did take some of the shine off the day. Bring it on Grumpy Trump! 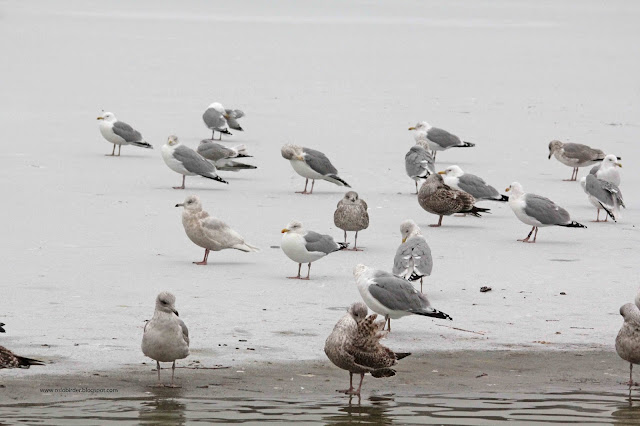 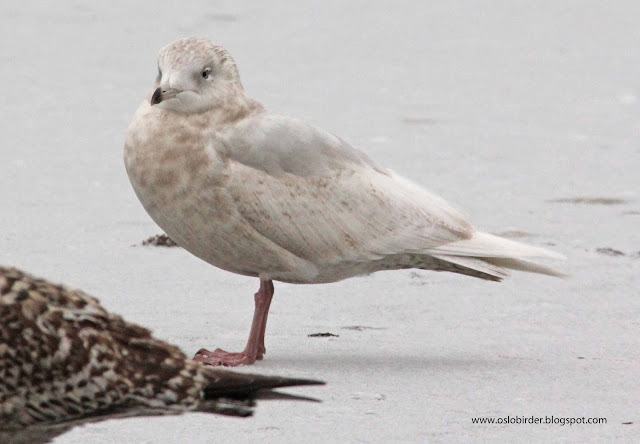 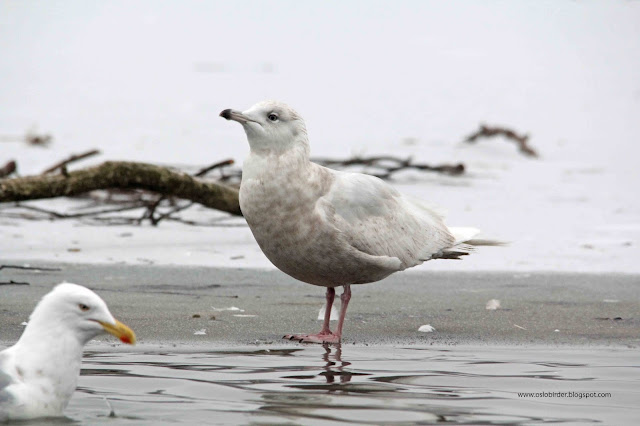 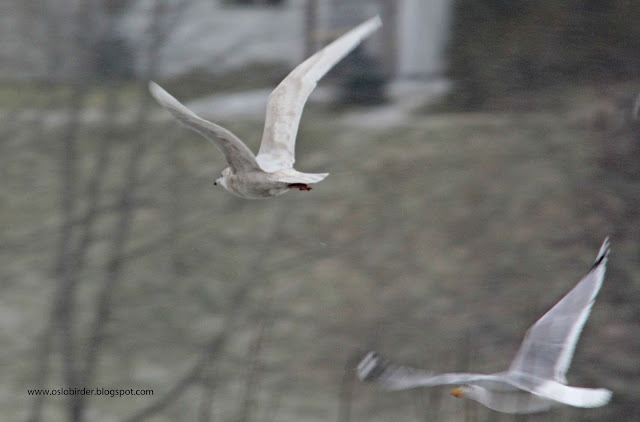 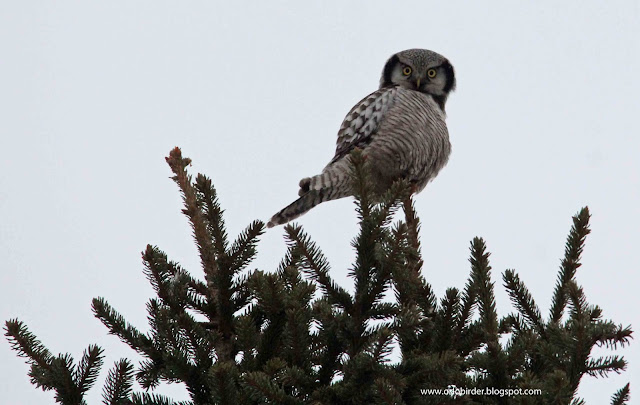 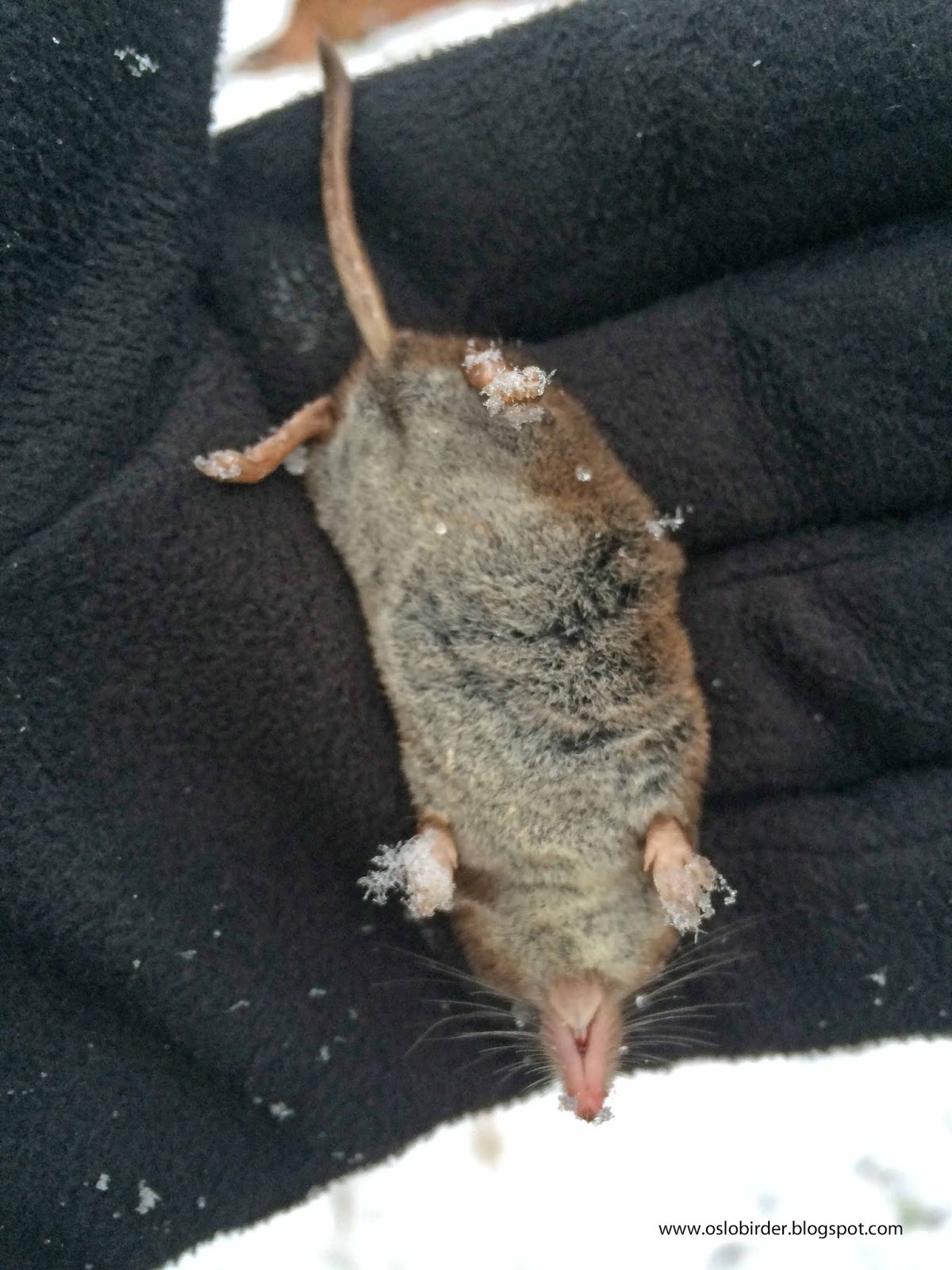 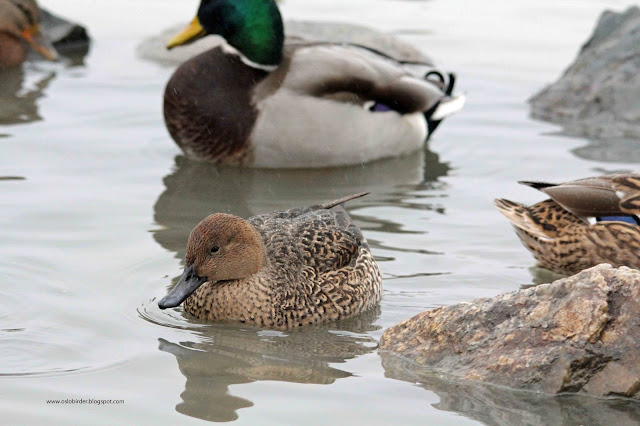