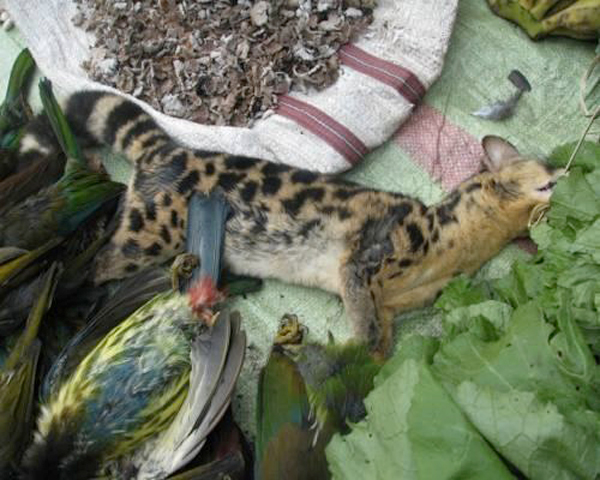 A comprehensive survey of the wildlife sold in the markets of Tuensang has resulted in a stunning record of the wildlife trade in the state of Nagaland in northeast India, as reported in a new study published in mongabay.com’s open-access journal Tropical Conservation Science (TCS). Once a week, researchers with the Sálim Ali Centre for Ornithology and Natural History and the Near Chang Baptist group entered the Tuensang market and carried out intensive surveys and interviews of vendors selling wild birds or mammals. Researchers noted the species, price, and quantity of each animal then extrapolated their data to determine the implications for the conservation of the Nagaland wildlife, which, as apart of the Indo-Myanmar sub-region, is in one of the world’s 34 global biodiversity hotspots.

Eight different species of mammals, 35 species of birds, 2 species of amphibians and 2 species of mollusks were recorded after 52 surveys. The estimates suggest that a whopping total of 16,634 birds and mammals are sold each year in the Tuensang market alone. Out of that, 3,657 are mammals, and 13,067 are birds. The most common bird sold was the great barbet (Megalaima virens), which was recorded in the Tuensang market 264 times during the 52 surveys. The most common mammal was the Himalayan striped squirrel (Tamiops mcclellandii), which was recorded 159 times.

The study demonstrates the lack of enforcement and effect of local and national wildlife protection laws in Nagaland. The paper suggests that the lack of effectiveness is most likely due to strong native culture in Nagaland (only about 100 out of the 29,772 residents of Tuensang are non-natives), made up of some 225 native tribe. The researchers found that the animals in the markets were almost all hunted or collected by native tribes, such as the Chang, Yimchunger, Khiemungan, and Sangtam. India’s laws protect virtually all large wild animals from hunting, but these laws are often ignored in Nagaland because of cultural traditions of the tribesmen, who uses the animals for food, medicine, ritual purposes, or, a source of reliable income. Cultural taboos or preferences in the communities for specific species also dictated much of the market demand and pricing. For example, the common hoopoe (Upupa epops) is believed to cure asthma, and so is more expensive than other birds, and bought for often.

Adding to the problem is the fact that most of the habitats in Nagaland are locally owned. Ninety-three percent of the habitual land in Nagaland is owned and managed by clans, villages, individuals, and district councils. The remaining 7% is government-owned and protected, but the rest of the land is primarily used for hunting or Swidden (slash-and-burn) agriculture.

Overall, the researchers advocate for increased monitoring of all Nagaland markets to find out more about the use of wildlife in the state. But the article cautions that the cultural and economic aspects of the issue need the involvement and support of the locals in Nagaland before any meaningful change can be made.