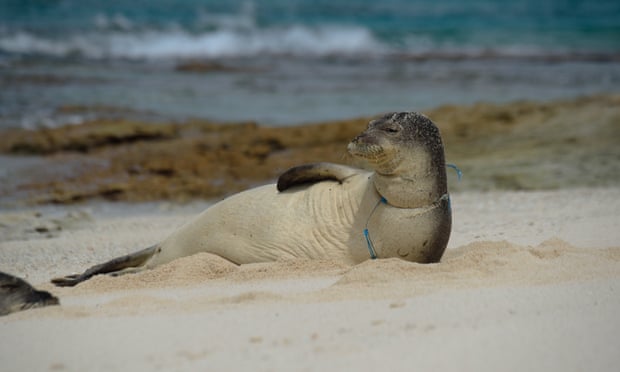 In a span of just over three weeks, more than 47 tons of plastic waste were removed from America’s largest protected marine reserve, sometimes directly off animals, a stark reminder of the scourge of plastic pollution in the world’s oceans.

An expedition spent 24 days clearing 10 miles of shoreline in the atolls and islands of the Papahānaumokuākea marine national monument in the remote Northwestern Hawaiian Islands. The team, led by a non-profit with support from state and federal agencies, collected 94,472lb of marine debris, aiming specifically for waste that poses an entanglement hazard to animals, such as derelict fishing gear, also called “ghost nets”.

“On our first day we came across a four-year-old female Hawaiian monk seal who had a bit of net wrapped really tightly around her neck,” said Kevin O’Brien, the president of Papahānaumokuākea Marine Debris Project, the non-profit that led the team. “You could see her trying to dig at it with her flipper.”

The crew was able to remove the net, O’Brien said, adding that it was routine for them to come across animals entangled in debris. “There is no permanent human presence witnessing these events and it’s so telling that within one day we found an entangled monk seal,” he said.

“For every one we do see there must be many more that go unseen.” Of the waste collected on the expedition, ghost nets made up nearly 80,000lb of the haul, while more than 14,000lb were ocean plastics such as fishing buoys, baskets, plastic bottles and cigarette lighters.

The marine reserve, located more than 1,300 miles from Honolulu, covers more than half a million miles of Pacific Ocean and is a crucial habitat to the endangered Hawaiian monk seal as well as the threatened green turtle and 14 million seabirds.

However, ocean currents and its location near the Great Pacific garbage patch cause debris to collect on the uninhabited beaches. More than 2m pounds of marine debris have been removed from the monument since 1996.

An estimated 11m tons of plastic waste reach the world’s oceans each year, an amount that is expected to triple in the next 20 years. Research has suggested that fish may actively seek out plastic debris because the pieces may smell similar to prey, and in Hawaii some fish begin consuming plastic within days of being born.

The expedition to the marine national monument, organized by the Papahānaumokuākea Marine Debris Project and with support from the state of Hawaii, Noaa, the US Fish and Wildlife Service and Hawaii Pacific University, involves crew members walking the shoreline, sometimes dragging hundreds or thousands of pounds of waste. Nets, which are usually brought to the shore by storms, often have to be dug out, while plastic smaller than 10cm is left behind.

“If you focus on anything too small you waste your time because there’s so much plastic,” O’Brien said.

Despite the inundation, O’Brien is hopeful, in part because of efforts to reduce plastic waste around the world, and because the cleanups like the one completed during the recent expedition make a difference, he said.

“[We’re] simply keeping up with the problem just so the wildlife can have a shot. Our cleanups are really having an impact on this place and for the species there,” he said.