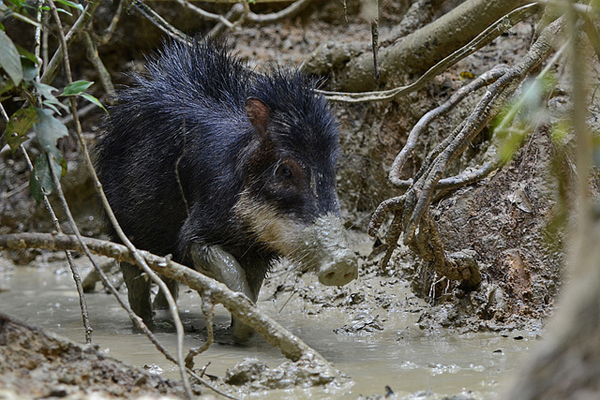 In another sign of the global biodiversity crisis, the IUCN Red List has added 715 species to its threatened categories of Vulnerable, Endangered, and Critically Endangered in this year’s update. Some of these species were evaluated by the IUCN Red List for the first time while others saw their conditions deteriorate, such as the the white-lipped peccary (Tayassu pecari) which is now listed as Vulnerable due to overhunting, deforestation, and possibly disease. As of this year, the Red List has evaluated 70,923 of the world’s species—including almost all mammals, birds, and amphibians—of which 20,934 are deemed threatened.

“The overall picture is alarming. We must use this knowledge to its fullest—making our conservation efforts well targeted and efficient—if we are serious about stopping the extinction crisis that continues to threaten all life on Earth,” says Jane Smart, Global Director of the IUCN Biodiversity Conservation Group.

This year’s list includes an update of the world’s conifers, the first total re-evaluation of this plant family since 1998. According to the update, 34 percent of the world’s conifers are now threatened with extinction, up from 30 percent. For example, both California’s Monterey pine (Pinus radiata) and the Atlas cedar (Cedrus atlantica) fell from Least Concern to Endangered; in all 33 conifer species saw their status fall. On the other hand, Lawson’s cypress (Chamaecyparis lawsoniana) moved from Endangered to Near Threatened due to active conservation efforts.

“Conservation works and the results for the Lawson’s cypress are reassuring,” noted Aljos Farjon, Chair of the IUCN SSC Conifer Specialist Group. “However, this is clearly not enough. More research into the status and distribution of many species is urgently needed. We suspect that there are many new species waiting to be described but it is likely that they will never be found due to the rate of deforestation and habitat conversion for oil palm plantations.”

Oil palm plantations have driven deforestation across vast sections of Malaysia and Indonesia. The industry is now eyeing expansion in the forests of Africa and South America.

“The freshwater shrimp data further confirm what we know from analyses of other animal groups: freshwater species are among the most threatened with extinction due to the dams, channels, pollution, and introduced exotic species in those ecosystems,” says Mary Klein, president and CEO of NatureServe.

Although the IUCN Red List has evaluated over 70,000 species since it’s inception, that’s only a drop in the bucket of the world’s total described biodiversity: currently 1.7 million species have been described with around 20,000 new species named every year.In fact, some taxonomic groups remain almost completely unevaluated: only one mushroom has been evaluated to date out of an estimated 31,000 species. While some 4,000 insects have been evaluated, over a million have been described.

Three years ago prominent scientists, including E.O. Wilson, called for a new initiative to assess an additional 100,000 or so species in an effort to create what they dubbed “barometer of biodiversity.” They estimated it would cost around $60 million dollars, but to date the initiative has not moved forward.

Lack of funds has hampered efforts across the board. It’s estimated that between $7-10 billion is spent annually on biodiversity conservation worldwide, mostly going to managing protected areas.

“For comparison, annual spending on subsidies to agriculture in the US, European Union and Japan is about US $220 billion per year,” reads a 2010 article in the IUCN World Conservation.

Scientists have been warning for decades that human beings are likely pushing the world into a mass extinction event with untold consequences for all, a warning that has only grown louder in light of worsening climate change, ocean acidification, and a human population that last year hit 7 billion. While the conservation plights of charismatic, big species get most of the media limelight, it’s likely that hundreds of thousands of other species are at risk of vanishing, some of them perhaps not even described by science and most receiving no targeted attention from conservationists.