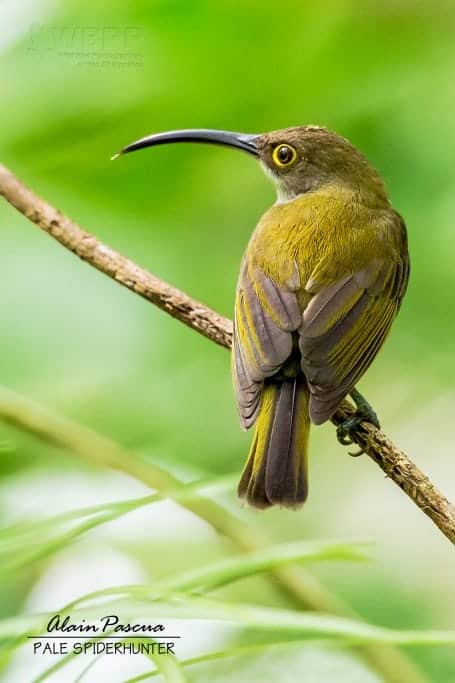 The now Philippine endemic Palawan restricted PALE SPIDERHUNTER is on top of our birding list when we visited Puerto Princesa City last month.

It was formerly grouped under Little Spiderhunter which is resident in some parts of South East Asia and India, but was split to full Philippine endemic after recent findings that it is of different species.

The Pale Spiderhunter behaves like a sunbird, but bigger. I noticed the yellow eyering is apparent and unmistakable in the pale but absent in little spiderhunter.

I was glad to find these endemics thriving in Sabang, the jump off point when one goes to the world famous Underground River.

Someday I wish to photograph it with a spider catch in its beak!

Other photos may be viewed at Wild Birds of the Philippines Facebook Gallery.

Thank you Canon Marketing Philippines, Inc. (CMPI) for the 5D3 and 300mm f/2.8 II, and to Ariel Dela Torre who accompanied us in Dap Dap Cabanas.

Sir, great post… I love the pictures. It only makes me wish I have a DSLR camera though 🙁 I am living in Quezon City, and happy to say that our place is not that polluted.. our front and backyard is home and feeding ground to some birds like the really fast and elusive hummingbird, several unknown species (im not fast enough to take a picture or video of them and i have poor bird identification capabilities so i really need a pic or video.lol) and little spider hunters. They do not have the ring in the eyes and much… Read more »

Thank you, Alain, for sharing these wonderful photos. The first image, in particular, is absolutely elegant! I must visit the Philippines someday.