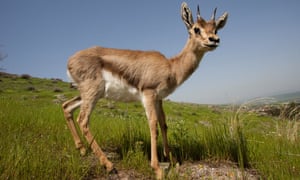 Zoologists are recommending that one of the Middle East’s most iconic mammals – the Palestine mountain gazelle – be placed on the endangered list amid a dramatic decline in its numbers in the last decade and a half.

Numbers of the gazelles, whose habitat is in Israel and the Occupied Palestinian Territories – including a population that lives in the hills on the outskirts of Jerusalem – have dropped to about 2,000 identified individuals.

The tan, white and black gazelles are a familiar sight in the Jerusalem forest, occasionally straying into the city itself.

That has led experts to fear that the animals could soon go the same way as their closest relatives who once lived in Syria and Egypt and are now believed to be extinct.

The recommendation was made by Dr David Mallon, the British zoologist who serves as the antelope expert on the International Union for the Conservation of Nature’s “red list” – which is assessing the conservation status of all global mammals.

In an email to the Guardian, Mallon confirmed that the IUCN had re-assessed the gazelle from a “vulnerable” to an “endangered” species.

The collapse in gazelle populations in the southern Levant and on the Arabian Peninsula has long been a matter for concern.

Confusing the issue, Mallon added, has been taxonomical issues that have only recently recognised the Palestine mountain gazelle – known by its Latin name Gazella gazella – as a genetically distinct species.

According to the Israel Nature and Parks Authority, the population in Israel has declined from more than 10,000 to just 3,000 in 2008 – a sharp decline that appears to be continuing.

The gazelle – originally named during the British Palestine Mandate – is regarded as scientifically significant because it is believed to be unique to Israel and a few surrounding countries.

Just 200 of the animals survive in Turkey – leaving the Israeli population as the last significant one.

The gazelle has suffered from loss of habitat due to construction as well as predation and collisions with cars.

The population in the forested hills around Jerusalem is currently under renewed threat from building plans – including new housing set to go up in Mitzpeh Nafto’ah, west of Jerusalem, which is being opposed by environmental groups.

Rachel Adam, a local activist, welcomed the proposed new listing status, telling Haaretz “It’s frightening to think that this iconic animal will soon disappear. The IUCN should be thanked for giving a timely warning while it is still possible to change direction.

“Everyone in Israel can act to prevent the extinction of this and other species and take part in a national effort to overcome the wave of extinctions that threatens the globe.”

According to Mallon, the new listing was based on a paper, prepared by the Koret school of veterinary medicine in Jerusalem and others, warning of the risk of extinction.

Describing the rare gazelle, the paper warned: “Ongoing habitat degradation and other human effects, such as poaching, suggest the need for drastic measures to prevent species extinction.”

The Society for Protection of Nature in Israel said: “The damage to the gazelle population stems from the chopping up of their habitats due to construction, paving of roads and erection of fences.

“They are also impacted by increased predation due to poor sanitation that facilitates growth in the number of predators and feral dogs. Animals are also killed by hunters and cars.

“It is therefore vital to maintain contiguous open areas and ecological corridors, especially in gazelle habitats. Unnecessary development in these areas should be avoided.”

This article was first published by The Guardian on 04 Sep 2015.