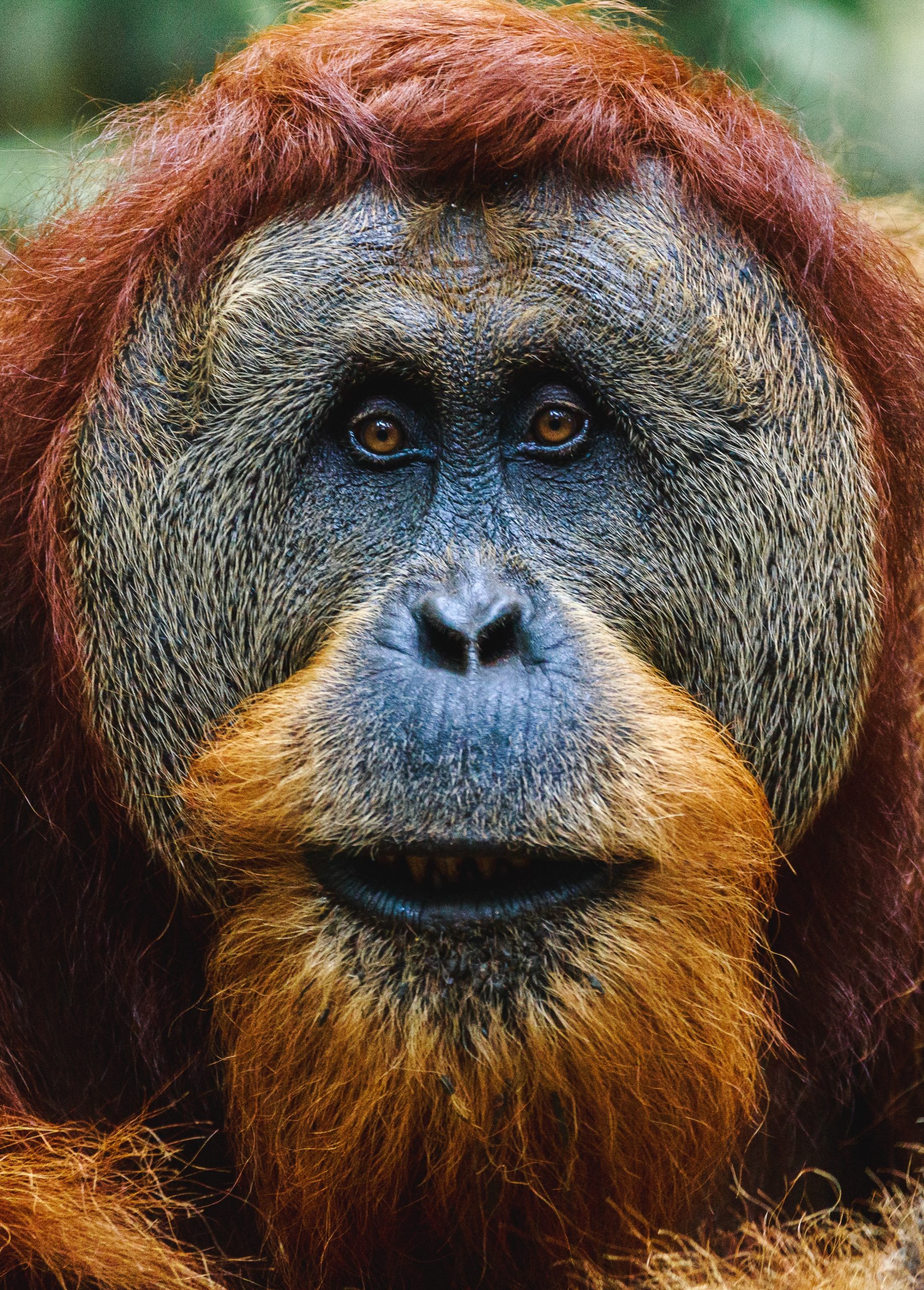 The California fires in November 2018 were more severe than ever and yet – the amount of forest that was lost in the combined fires makes up only a fraction of Indonesian forest that is burned every year in slash-and-burn practices to clear palm oil plantations.

In 2015 alone,the area of Indonesian forest burned was more than 26 times greater than in California in 2018. This frenetic pace of deforestation is slashing orangutan habitat, rendering their homes charred and uninhabitable for those lucky enough to escape the fires.

Deforestation, habitat loss, and animal rights abuses are nothing new in Indonesia. The country’s economy is growing rapidly at the cost of its natural resources, and even the Minister of National Development and Planning Dr. Bambang Brodjonegoro has cautioned to “consider the carrying capacity” of Indonesia’s environment.

Suitable orangutan habitat in Borneo has been slashed by more than 80%in the last 20 years due primarily to palm oil expansion. According to the WWF, 300 football fields of rainforest are cleared hourly in Southeast Asia for palm oil.

Malaysia and Indonesia produce 85 percent of the world’s palm oil, and the region also accounts for some of the greatest biodiversity hotspots which are at risk of destruction from palm oil expansion.

Deforestation and hunting killed nearly 150,000 Bornean orangutans from 1999 to 2015. At this rate, it is predicted that orangutans could be extinct within the next decade.

In addition to deforestation, the slash-and-burn practices of clearing plantations have caused crippling, transboundary haze across Southeast Asia.

During the burning in 2015, the World Bank Group reported smog levels in Indonesian villages nearby over 1000 on the Pollutant Standard Index (PSI) – that’s more than three times the amount considered “hazardous” for humans and animals.

The Centre for Orangutan Protection (COP) works at the frontlines of the fires, crimes against orangutans, and battles with palm oil companies. As one of Indonesia’s most dogged activist groups, they hijacked the 2013 Roundtable on Sustainable Palm Oil in Medan, Sumatra by barging in on the meeting dressed in orangutan costumes. In the 20 minutes before the police removed them, they displayed a banner urging onlookers to boycott the palm oil companies present there.

Deforestation is a deeply personal issue for the indigenous Dayak population. Paulinus Kristianto, an indigenous Dayak, decided to step up and work for the Centre for Orangutan Protection to protect his own people. “When I see the Dayak tribes lose the forest, we can’t do anything. We try to fight and the companies send us to jail. So, I must go to fight. It comes from my heart. I must prove to the people what’s happening is bad,” says Kristianto.

Across Borneo, the Dayaks are fighting tooth and nail in a complex battle for their rights to live in their forests. The Dayaks are witnessing the end of their way of life, the forceful drowning of an entire cosmology due to the deadly trifecta of palm oil, hydroelectric development, and logging. A tangible Native Apocalypse is in sight.

More than 70 percent of orangutans live in unprotected areas where there is palm oil, logging and mining, according to Borneo Orangutan Survival Foundation (BOSF) director Jamartin Sihite. Despite a moratorium issued on the opening of new palm oil plantations, local governments face no sanctions for non-compliance and can allow old permits to operate new plantations. Abetnego Tarigan, former executive director of the Indonesian Forum for the Environment (Walhi) and now senior advisor to the President, has a unique perspective on the government’s stake in palm oil.

“The moratorium is actually a way to improve the palm oil sector by increasing productivity,” he tells me in an interview. Tarigan too agreed that the moratorium in itself is not enough – reviewing permits is crucial, and “it’s public knowledge that many permits are released to bribery without the support of an environmental impact assessment or disaster risk,” he adds.

Palm oil monocultures are replacing forest ecosystems, and all those who depend on the forests—orangutans, elephants, and also the indigenous Dayaks—are less valuable than the land upon which more palm oil can be grown.

How Palm Oil Affects the Economy

In economic terms, the losses to Indonesia during the 2015 haze accounted to USD $16.1 billion. This doesn’t even include other impacted countries in the region, or the detrimental health effects to both people and animals.

According to the World Bank, about 35 percent of the Indonesian workforce is employed in agriculture, with palm oil and pulp-and-paper industries being key contributors.Even Kristianto, who has seen the devastation of palm oil, declares himself not to be anti-palm oil. “Palm oil is still needed in Kalimantan,” he says. “So many places are isolated, and palm oil companies build infrastructure.” Palm oil is Indonesia’s top export and accounts for 13.7 percent of Malaysia’s gross national income. While the crop is responsible for the razing of rainforests and the destruction of forest life, palm oil has accelerated development in the most isolated places. Palm oil has brought paved roads, improved connectivity, satellite television, schools, and hospitals to the most isolated places. Rural employment and poverty alleviation have likewise vastly improved.

BOSF director Sihite pulls all threads of human development into the picture: “You cannot talk conservation with hungry people. Give people a way to find an alternative livelihood. It’s so complicated with poverty alleviation, rescue and release, monitoring, and combating fires.” If indigenous people (orang asli) can secure their land rights, the forest will be secure. Land rights for indigenous tribes should be at the top of agenda in conservation.

BOSF’s strategy for orangutan conservation is collaboration. In 2011, the NGO was unable to release a single orangutan – there was simply not enough suitable, safe habitat available. In an interview, Sihite shared that after unsuccessfully lobbying the federal government to provide more protected forest for release, BOSF then went to local governments and then reached an agreement to actually buy the licenses of logging companies (good for 60 years) and pay tax for land where they can release orangutans. They now have 557 orangutans in centers around Kalimantan.

For the orangutans fortunate enough to be rescued from habitat destruction and hunters, the journey back to the wild is uncertain and harrowing. The Wildlife Rescue Centre (WRC) in Yogyakarta supports the COP’s program to rehabilitate and release orangutans, and is home to 168 animals including orangutans, macaques, sun bears, gibbons, eagles, monkeys, cassowary, and many more.

But suitable habitat for release is scarce. “Right now it’s hard to find a habitat to release the animals. For example, most of the national parks are already full of eagles, and eagles are territorial, so we almost can’t release more,” says Ignatius Prasetyadi of WRC.

“The forests are overfilled and conservation centres are at maximum capacity. The solution isn’t to make more cages, but to build enclosures, sanctuaries, and mini-forests,” Prasetyadi adds.

Sihite is motivated to get orangutans back into the trees, climbing in their natural environment. “You go to rehabilitation centers and see the big orangutans who have already spent 15 years in the cage. You see their eyes. They look empty. No hope, it’s like a loss of soul. I work so hard to get these orangutans out of the cage,” says Sihite.

Deforestation affects the animals which don’t get the spotlight as well. “If you lose orangutans, you lose the 40 types of plants that are grown through their digestive systems,” Rosalia Setiawati of WRC mentions. Sihite agrees: “Orangutans are the gardeners of the forest.” If we lose orangutans, the entire forest ecosystem will change in ways we can only predict.More rescue and rehabilitation centers are needed to support law enforcement and to house greater numbers of homeless animals.

How You Can Help

There’s no time to wait for boycotts on palm oil to become effective. Every day spent waiting to shift demand and supply by boycotting is a day in which 25 orangutans are lost. Companies and policies must directly eradicate unsustainable sources of palm oil from their supply chains.

More than a decade ago, Friends of the Earth campaigned for a year to pressure Tesco and other retailers (by even protesting outside storefronts) to develop a framework to certify sustainable palm oil and require product labeling for consumers to know the source of their palm oil and its harm to orangutans.

There are a few things that consumers can quickly do to identify when a product contains palm oil, and avoid it:

It will require tireless advocacy to not only raise awareness, but to get businesses on board to change their policies, their supply chains, and even their ingredients. Kristianto would be more than happy to put himself out of a job if this were to be successful. He says, “I believe conservation is not about how much we rescue the orangutans. It’s about how much people care about them. Conservation is successful when you don’t have to rescue them anymore.”

The race to save Indonesia’s orangutans is a challenge for Indonesia to balance its frenetic economic development with a dire need for conservation.Partnerships are essential to save Indonesia’s national gem, as well as the other hundreds of species of animals suffering from habitat loss. Their conservation does not always lead to full rehabilitation and release. Many of WRC’s orangutans and other animals are too old to be released back into the wild and must remain in captivity as permanent residents.

The pressures on Indonesia’s forests are complex. Fires resulting from slash-and-burn practices ravage all forms of life.To combat deforestation and biodiversity loss, the United Nations dedicated Goal 15 of the Sustainable Development Goals to life on land. These targets focus on conservation efforts and halting illegal wildlife trafficking by 2020.

Despite the efforts to produce sustainable palm oil, multiple conferences and summits, and the formation of international organizations, the goal of achieving a sustainable form of palm oil is far off.

Just a few months into 2020, we see fires decimating millions of acres of land in Australia. The haze is a human-driven phenomenon. It is not an annual yet unpredictable occurrence we wait for and lament about, like a monsoon season. It will take a great deal more of stricter law enforcement and supply chain shifts to stop burning the homes of orangutans and countless other species – but this is something we have complete control over.

This article was first published by OneGreenPlanet on 27 April 2020.

Have made a rough draft but will use this article in our future work.

And we actually consider ourselves to be the superior species. That would be funny if it was not so heartbreaking and tragic

We’re just a Plague on this Planet .

Unfortunately my faith is all but gone. I have campaigned for boycotting palm oil and writing to companies etc since 1994 when I first heard about the RSPO and I live my life virtually palm oil free BUT personally it is a waste of time – IF you get a reply it will be a standard response to say how they are a member of the RSPO and so that makes everything right. Sorry to burst your bubble and some of me says YES write to them but tbh it wont change the future for our forests. Government and BIG… Read more »

More than a decade ago, Friends of the Earth campaigned for a year to pressure Tesco and other retailers (by even protesting outside storefronts) to develop a framework to certify sustainable palm oil and require product labeling for consumers to know the source of their palm oil and its harm to orangutans. BULLSHIT!!!!