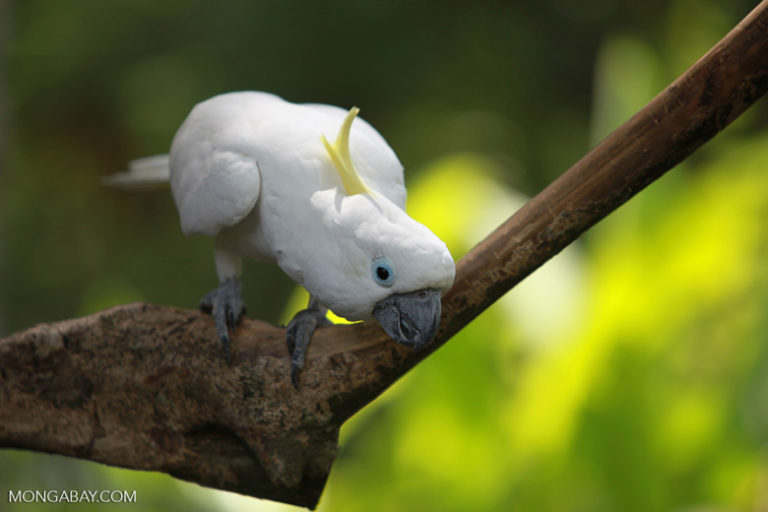 JAKARTA — Forests in parts of Indonesia regions that have remained largely untouched are now fast disappearing as deforestation driven by agribusiness and infrastructure development moves east, according to a new report.

Using deforestation data from the University of Maryland’s Global Land Analysis and Discovery (GLAD) data set and land cover maps from the Ministry of Environment and Forestry, the report by a coalition of 11 Indonesian NGOs looks at the trend of forest clearing across Indonesia in the past two decades.

It found that while the annual deforestation rate has been decreasing over the past decade nationally, 10 provinces with relatively abundant forest cover have seen their individual rates increasing.

Dedy Sukmara, a researcher at the environmental NGO Auriga, a member of the coalition behind the report, said looking at deforestation trends by region rather than nationally is important because it gives a clearer picture of what’s happening with the country’s forests.

He cited the case of Riau province on the island of Sumatra, where the forests have been almost completely cleared for large-scale pulpwood and oil palm plantations.

According to the report, the deforestation rate in Riau plunged by 81%, with 715,000 hectares (1.76 million acres) cleared in 2015-2019 compared to the previous five years. The decline here and in other provinces where there’s virtually no forest left to clear is enough to drag down the national average, enabling the government to claim that it has succeeded in curbing deforestation through its own policies and actions, according to Mufthi Fathul Barri, a researcher with Forest Watch Indonesia (FWI).

As a result of this claim, Indonesia has received plaudits from the international community for ostensibly making progress on reducing its greenhouse gas emissions, the biggest source of which is deforestation and land use change. The U.N.’s Green Climate Fund, for instance, has approved a $103.8 million payment to Indonesia for preventing deforestation-based carbon emissions — its biggest payout to any country.

“If [we] take a closer look [at the data], it [declining deforestation] isn’t caused by the government’s performance in curbing [deforestation], but because forest resources in regions with lots of forestry permits have already been exhausted,” Mufthi said. “On Sumatra and Borneo, they’re largely gone.”

And with large tracts of land becoming increasingly scarce on those two islands, the same agribusiness companies that cleared the forests there are now eyeing the eastern islands of Indonesia, particularly the Papua region.

This region — comprising the western half of the island of New Guinea and split administratively between the provinces of Papua and West Papua — is home to 38% of Indonesia’s remaining rainforest. This amounts to 33.8 million hectares (83.5 million acres) of forests, an area the size of Florida — and it’s here where the biggest jump in deforestation is happening, according to the NGOs’ report.

“When there’s a claim of decline in deforestation in Indonesia, that doesn’t mean anything when 80% of it is happening in Papua,” Mufthi said. “Why? Because we’re an archipelagic country. Deforestation should been interpreted in more detail” than the national average.

Papua’s remoteness — it’s largest city, Jayapura, is two time zones and more than five hours by plane from the capital, Jakarta — and dearth of infrastructure such as roads, electricity, telecommunications and piped water have long rendered the region the least developed and most impoverished in Indonesia.

On the flipside, though, it has meant the rich forests of Papua, one of most biodiverse regions on the planet, have stayed largely out of reach of the agribusiness and mining outfits that have ravaged the forests of Sumatra and Kalimantan.

But that’s changed in recent years, thanks to a renewed government focus on boosting development in the region. Palm oil companies have begun moving in, quickly mowing down vast swaths of some of Indonesia’s last pristine forests.

A 2017 study by Duke University and the International Institute for Applied Systems Analysis showed that deforestation driven by oil palm expansion in the region had increased fivefold in the past decade.

The coalition report also shows that oil palm expansion is a major contributor to deforestation in Papua, with government-issued licenses making the deforestation legal.

The so-called forestry conversion licenses are issued by the Ministry of Environment and Forestry to degazette forest areas — where plantations and mines aren’t allowed — into non-forest zones, which can then be cleared and converted.

Satellite image analysis of these release areas for oil palm plantation development reveal that, in 2019, areas under such licenses saw 145,595 hectares (359,000 acres) of deforestation, or almost one-third of all the deforestation in the Papua region.

The Ministry of Environment and Forestry, in responding to the NGOs’ report, tried to deflect by saying almost all the deforestation in the Papua region stems from permits issued before President Joko Widodo took office in 2014. It added that the forestry conversion permits issued under the current administration were based on recommendations from local community leaders.

FWI’s Mufthi said blaming the previous past administrations achieves nothing.

“Regardless of who’s the president and the minister, the fact is that deforestation in Papua keeps happening at an increasing rate,” he said. “It’s very unethical if government institutions blame each other, especially if it’s still the same ministry. Most officials working in the forestry ministry today also worked in it under the previous administration.”

Infrastructure as driver of deforestation

While oil palm has historically been the major driver of deforestation in Indonesia, today it’s not the only one, Mufthi said. Infrastructure development is another factor, and one that’s being pushed heavily by the Widodo administration, he said.

He pointed to a near-doubling of the deforestation rate in Papua’s mountainous hinterland from 2013-2018, compared to the previous five-year period. “Our prediction is that this is caused by road development, infrastructure projects, etc.,” Mufthi said. “They indirectly contribute to deforestation that’s happening in Papua. Mountainous areas are started to get encroached on because road access is being opened little by little.”

A 2020 report by FWI cited the case of Tambrauw district in West Papua province, which has seen a web of road projects spring up in recent years. The district government has declared Tambrauw a conservation district, with the aim of protecting its remaining forest. But road projects being pushed by the national and provincial governments are eating away at these forests.

And while the publicly stated rationale for building new roads is to connect remote villages and settlements, in many cases the new roads serve the mines, plantations and logging concessions dotted across the Papua region. The report shows how two roads in northern Tambrauw — an existing one and a planned one — provide easier access for logging companies already operating there to truck out their wood.

“Meanwhile, the road in the middle part of Tambrauw also passes plantation and mining concessions,” the report says. “And all planned airports and docks are located less than 5 kilometers [3 miles] away from concessions.”

“During the administration of former president Susilo Bambang Yudhoyono, there were many licenses issued [for agribusiness], especially in Papua,” he said. “Meanwhile, during Joko Widodo’s regime, there are many infrastructure developments to accommodate and support the needs of the companies that received licenses from Yudhoyono’s administration. So it’s very weird for fingers to be pointed when all these are connected.”

With deforestation showing no signs of slowing in Papua, Mufthi called on the government to learn from past policy mistakes that led to the wholesale deforestation of Sumatra and Borneo.

“If we could project what will happen to Papua in the next two decades, just look at what’s happening in Sumatra and Kalimantan now,” he said. “Similar things are starting in Papua now and this is a warning for us all.”

He said the government should use all of the tools in its policy kit, including a moratorium on new permits to clear primary forests and peatlands, and another on establishing new oil palm plantations.

“If this situation can’t be improved, then what’s the use of the moratoriums?” he said. “This is a moment for all of us to think of what can be done in the future, not to deny and look for justification from facts that are happening.”