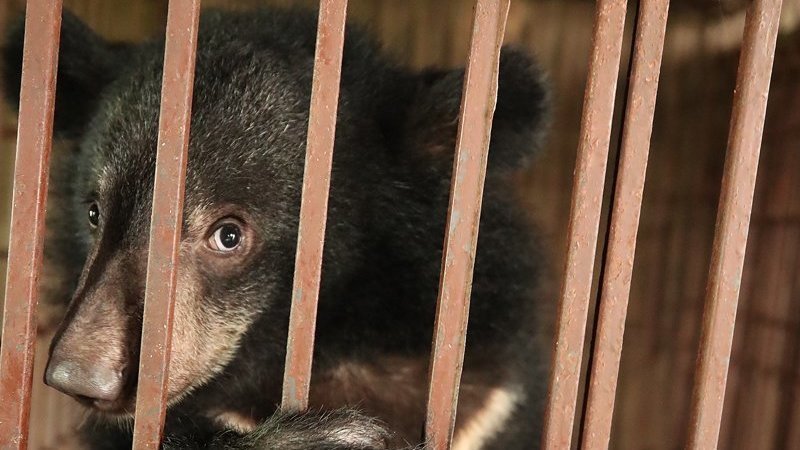 I discovered Boo the bear and his friends whilst on an undercover conservation project in Vietnam. There is nothing quite like experiencing the misery and horror of a bear bile farm first hand to make you fight for change! Since their discovery in 2018 I have been battling for their release.

Please watch, comment on and share the short film Lawless Lands. This is about Boo, his friends and Vietnam’s illegal bear bile trade. It has just been chosen to be screened at the International Vegan Film Festival 2020. Judging for the winning films is still in progress so fingers crossed!

Boo’s first memories were brutal. Mother bears are fiercely maternal so poachers kill them to capture their wild-born cubs who are more passive and small enough to be hidden in a bag or the boot of a car!

According to the illegal wildlife farmer who is holding Boo and his friends captive, the bears were trafficked from Laos to Vietnam as helpless 1kg cubs breaking CITES legislation. This is a major violation of international Conservation Laws.

While 3 of the Nghe An 13 bears have been rescued, Boo and his 9 friends remain incarcerated on two closely located illegal bile farms in Nghe An Province.

Boo is languishing away in a small rusty cage in a dark and breathtakingly humid room. Despite the intense heat, Boo is never given water to drink but instead relies on a sloppy daily gruel to stay hydrated. As “expenditure on food has dropped by 87%,” (Crudge et al. 2018) bears are not only facing starvation but are desperately thirsty.

Although the illegal wildlife farmers sedate the bears to extract the bile, they are clearly terrified, standing on their hind legs roaring in fear before the operation.

Being illegal, there is no training available for this invasive and dangerous procedure, so the owners have to learn on the job. The bears that survive this game of Russian roulette are then kept alive with antibiotics.

The Rescue of the Nghe An 3 Bears

Education for Nature Vietnam (ENV) have ensured the release of 3 of the Nghe An 13 Bears to a Four Paws Sanctuary but during the rescue, there was “a hair-raising standoff with stone-throwing villagers who piled straw around the ENV inspection team’s vehicle and threatened to set fire to the car if the team did not submit themselves into their custody.” (ENV Press Release)

In an unusual move, the detailed facts of this investigation have been made public to aid supporting governments and NGOs to take action. For a detailed overview of the evidence in this case please visit Verify Humanity.

Failure to Enforce the Law – Why?

These violent wildlife criminals are operating beyond the rule of law because the local government are scared of inflaming tensions. Wildlife criminals now know they have the upper hand and Nghe An Province is rapidly gaining a reputation as a lawless state.

Every day that goes by, there is a risk the farmer will shuffle Boo and his friends onto other farms to avoid detection, kill them to avoid punishment or they will die from one of the many health problems associated with life on a bile farm.

Please help me save Boo and his friends by signing and sharing their petition. Every signature will apply pressure on the UK government who are leading the fight in the illegal wildlife trade but also the Vietnam Central Government who can make the local Nghe An Authorities uphold the law.

This petition was first published by Verify Humanity and will be submitted to the Vietnam Government and 25 other decision makers.