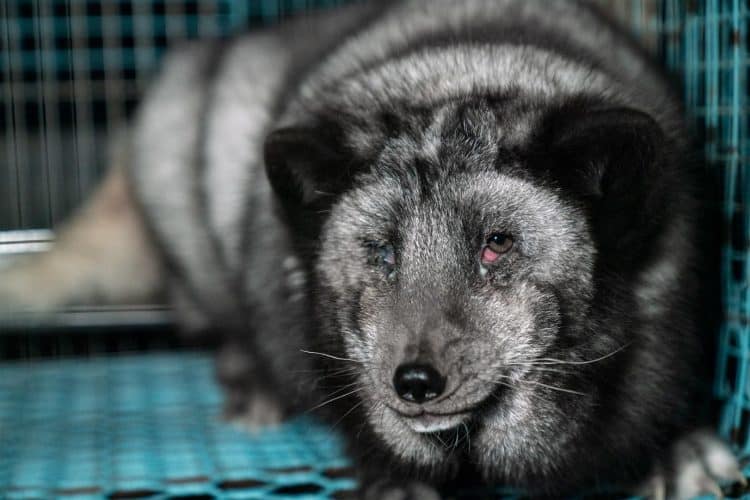 The requirement for the cage size for a fox is 0.8 m2, while for a mink it is 0.25 m2 without a nest box. The animals hardly have room to move in the cages. In addition, the animals often have sicknesses such as eye and skin infections, bent legs, open wounds due to cannibalism, and serious stress related sicknesses with symptoms such as stereotypical behaviour.

Several countries in Europe have either banned fur farming already or are in the process of banning it. Several fashion houses have already rejected fur, because fur farming is considered as extreme animal cruelty. Moreover, fur farming is not only unethical to animals, but documentaries from leather and fur processing factories show that the working conditions are very poor.

The fur industry in Finland often defends its existence by stating that it is better to farm animals for their fur in Finland, in controlled circumstances, than in China for example. In reality, the Finnish fur farmers have been in co-operation with the Chinese fur farmers since the 1980s.

Breeding animals have been transported yearly from Finland to China during 2000s. The last successful transportation was in 2019. Finnish fur industry has been promoting the branch in China through this co-operation and marketing. In addition, most skins are sold to China and Russia. Very few Finnish people buy fur anymore, and most of the fur is used in accessories such as pom poms on hats and scarves.

The profitability of the fur industry in Finland has sunken. There are currently a little over 900 fur farms in Finland: less than 700 of them are part of the Fur Breeders Association, Pro Fur. The size of the farms has increased, however, and there are up to 25000 animals in one farm. It is obvious that it is impossible to take good care of so many individuals, especially as the farms are often family-owned small businesses with only a few people working in them.

According to a new poll, 75 % of the Finnish people would ban fur farming in its current form. In other words, they would improve the animals living conditions. 60 % of the Finns consider killing of animals for their fur as unethical.

Regardless of this, only less than 40 % of the members of the Parliament are in favour of banning the fur industry in Finland, according to the latest poll. It is time that the decision-makers listened to the people, and took actions to ban the cruel fur industry, with a transition period.

We want to put a lot of public pressure on the Finnish Parliament, the government, and the ministries to ban fur farming in Finland. Thus, we have created a petition at the Care2 website, and we aim to collect at least 200 000 signatures.

Help us to make this world a better place for animals by signing the petition:

Demand an end to fur farming in Finland.