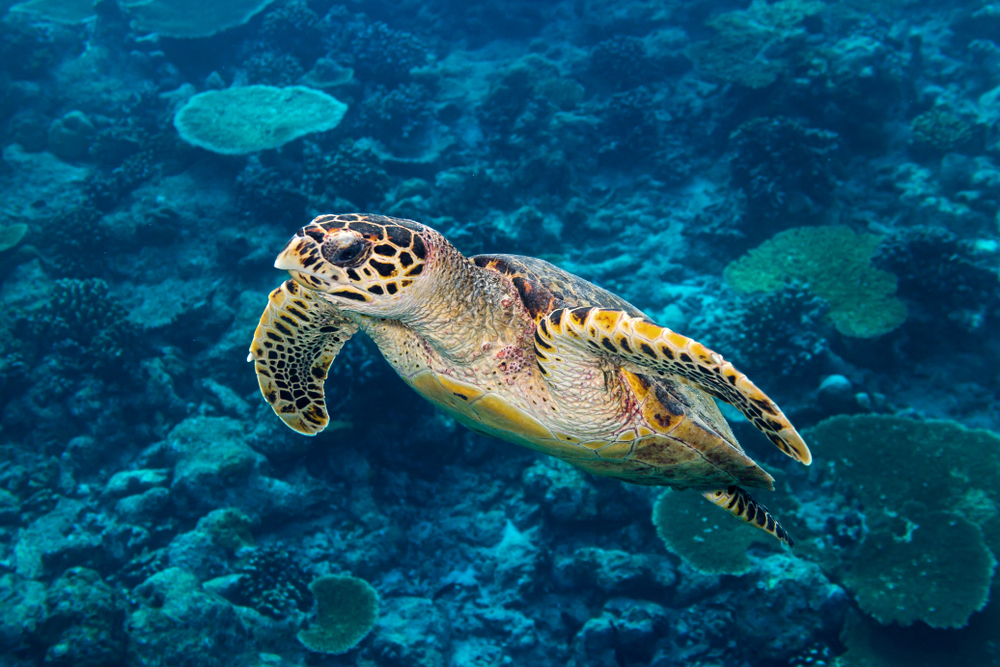 Hawksbill turtles are one of the many sea turtles that are critically endangered. Their extinction would affect marine ecosystems as they are a fundamental link that help maintain the health of coral reefs and sea grass beds.

Unfortunately, they are endangered by human activity and climate change. The rise of ocean levels leads to an increase in storm frequency, which in turn causes erosion on beaches where Hawksbill turtles lay their eggs.

Pollution in the ocean also kills many turtles as they can become ensnared in fishing gear or even become bycatch of the commercial fishing industry.

They are also sadly victims of poaching. It’s one of the greatest threats to their survival. Hawksbill turtles have a distinct pointed, narrow mouth and beautiful brown and yellow shells. These gorgeous shells sadly make them targets for poaching.

For more than 400 years, people in Japan have been using eyeglasses with frames made from the shell of these turtles. Jewelry is also made with their shells. It’s known as a luxury product across Europe and America as “bekko.”

According to National Geographic, tourists flock to Enoshima and other villages just 30 miles from Japan’s capital to purchase “bekko” products from necklaces to earrings.

From 1844 and 1992,more than nine million Hawksbill turtles were killed. According to the latest count, there are just 25,000 that remain.

This is unacceptable. Japan must end the entire trade of bekko as to discourage the illegal poaching and importation of hawksbill products. Sign this petition to help save these beautiful critically endangered turtles.

This article was first published by OneGreenPlanet on 31 October 2019.