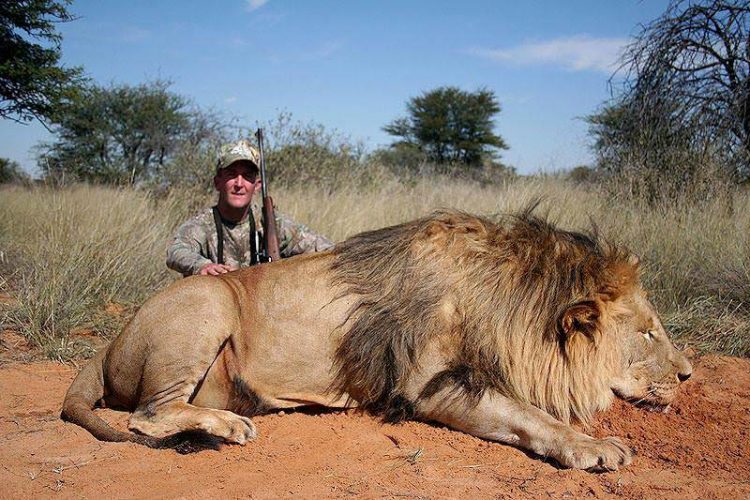 An investigation into the growing South African industry of hunting lions bred in captivity has reignited a long-running controversy among hunters, captive breeders and animal rights advocates.

The Guardian’s Patrick Barkham investigated the practices of some of the 160 South African farms that legally breed lions and other wild animals — many of which, animal advocates argue, will end up being shot by hunters who pay big bucks (sometimes close to $38,000) for the experience.

One of the farms – African Sky Hunting – will arrange for you to shoot an elephant for $35,000 or a lion for the budget price of $22,000 (see price list and trophy photos below):

This is the practice known as “canned hunting,” and its popularity has increased significantly in the past few years. The South African Supreme Court in 2010 even struck down a law restricting the practice after lion breeders challenged the legislation.

Lions bred for canned hunting are generally kept in cages and released a few days before the hunt, according to Bloomberg. Pieter Potgieter, chair of the South African Predator Breeders’ Association, defended the canned lion hunts as a perfectly acceptable business.

“The principle that you breed wild animals for economic exploitation is an international norm. It takes place everywhere in the world,” Potgieter told the Agence France-Presse. “The problem is with the lions because the image has been created in the minds of people that the lion is the king of the animals. Walt Disney with his Lion King and all these things, they have created that image.”

Today, more than half of South Africa’s approximately 8,000 lions live in captivity rather than the wild, according to the AFP. Globally, there are around 32,000 African lions, a number which has seen a “substantial decline” and has earned them a “vulnerable” classification by the International Union for Conservation of Nature.

While breeders claim their business is legitimate, animal rights advocates at Humane Society International argue the practice is inhumane, unethical and bad for South Africa’s image.

The Campaign Against Canned Hunting calls for a ban on canned hunting in South Africa. Chris Mercer, one of the organization’s founders, said in an email to The Huffington Post that the industry benefits from unsavory practices, such as the renting out of baby lion cubs for unwitting tourists to pet and cuddle.

“This enriches the canned hunting industry and allows lion farmers to externalise much of the cost of rearing the lionstock to huntable age,” Mercer told HuffPost. “Tourists are deceitfully assured that the cubs will be released back to the wild. All of these cubs will eventually be killed by canned hunters.”

Breeders may also capture wild lions — sometimes from neighboring countries — and smuggle them onto the farms, Mercer told Eye Witness News. “This toxic industry is going to poison the conservation of wild lions,” he told the site.

We invite you to vote FOR or AGAINST “Lion Canned Hunting in South Africa”. Please vote and also leave your comments at the bottom of this page.

What the hell is wrong with people ? The unending ego boosting is ridiculous. There is NOTHING to be proud of. These creatures were not put on this earth for us to abuse and kill. Because they walk on four legs instead of two make them beneath us ? No. Their lives are just as important as ours. These big brave hunters should face a lion without a gun. Instead of using a scope and hiding from the animal, which is cowardly, try facing the animals one on one and see how brave they are. They warrant no respect.

if the petition is closed, why don’t you say so, so I don’t have to go searching and find no place to sign

Another disgusting example of human cruel and beyond stupid

People who are SO happy about killing GODS wonderful creatures will get their day of reckoning!!

Anyone engaging in this deplorable business are,by definition insecure,egotistical morons who need medical intervention.do they realise they are dispised by all right thinking folks,and must be treated with the same level of hate as pedophiles

This a sickening photo and those people r smiling I hate that picture , what r they going to do with beautiful dead fur boy anyway , white people dont eat lion , do they ???????? Put the farms that;raise these beautiful just to kill out of business please .

The only good hunter is a dead one.Hunt the hunters! An eye for an eye!

Spineless, murdering cowards why don’t you kill your own children instead???

Darn it!!!! These bloody brainless morons! I’d like to wipe those bloody grins off their revolting faces. Could shoot one of them and feel NOTHING!

Any asehole can aim a gun, pull the trigger and take the life of a beautiful, living creature. It’s time to hunt the hunters. I could quite cheerfully shoot any or all of them. What goes around will eventually come around and some day their karma will come back to bite them in the butt, either in this life or the one to come. I would visit South Africa to see wild animals, bur I have absolutely no interest in visiting a place that exploits animals and tries to rationalise their cruelty.

Please cancel a vote in favor of hunting. I went wrong. Why my English is weak and I misread. sorry

These people are sadistic killers. No way can even these morons call it sport.

Disgusting people. I’d like to put them in an enclosure and hunt them and their offspring.

Cowardly filthy scum, killing innocent animals bred to trust humans, they live in the gutter and will never get out of it.

What is this sick event?! Why do people have to do this? Stop this please..

If these people have money to burn, how about having a well dug for the natives, or have them taught how to farm, or open a school?. But these are things done by good people not inadequate psychos. These sad people are just letting the world know they are here in the worst possible way, they are screaming ” Look what I can do, look how brave I am. I`m here take notice”. People who kill just because they can should be pitied, they`re pathetic.

This is sooooo F—–g wrong!

Its a disguisting bloody evil killers

Killing anything for fun or fashion is barbaric and totally unnecessary in this day and age! How anyone can be proud of taking a life like this is beyond me?!!! Cold hearted and soulless people!!! End it now!!!!

Killing animals for fun is not sport, it is psychotic! Many studies have shown that people who kill animals also have the capability to kill people. You are all a sick bunch of people that delight in the torture and killing of some of the most beautiful wildlife, not to mention, some are endangered. May Karma x 3 follow you all for all the days of your putrid lives.

Canned trophy hunting attracts the scum of the earth! If they are so intent on killing, let them shoot each other and good riddance!!!!

Please stop! We have hardly any animals left in the natural world and thus is what you chose to do! How ignorant

These “men” are obviously compensating for other small parts of themselves. And I don’t just mean their brains!!

I can never understand the thrill of shooting an animal at almost point blank range, from a hide! There is no skill in that, so it must be because you are sadist bar stewards!

They should been canning beets instead , it’s murder as far as I’m concerned , unacceptable !!!!

This must end now!

You are a bunch of idiots who see these beautiful creatures as a commodity. Wake Up?!

This is so horrible. And then to pose there like they’re big shots….

As a conservationist, I would prefer to see them stop wild lion hunting first! We purpose breed all sorts o animals to kill, fish, birds, mammals, even reptiles! Why not lions? Logically, there is no difference to breeding and killing a sheep for money than there is doing the same thing with a lion! And every person who eats meat is also a killer even if it is by proxy. Competition for habitat from people kill far more wild animals than bullets ever have or will.

This is disgusting and it needs to be stopped urgently!!!!

these people show a total disrespect for nature… I would like to
see them lined up in a canned hunt…. They give all humans a bad name.. look at those disgusting families all proud to murder a magnificent animal… they are souless monsters and I hate them.

Karma will find these killers someday

this brakes my heart

Sick people – sick world. Hope they die in pain and misery! Even children are with absolutely idiot parents!!!

hugh randall ! differend from you , i would like to kick your as , il pay for it !

I can’t believe people actually voted no for this. Where is your humanity?

Did it ever occur to any of you how many people or the good you could have done ith that money…but instead you couldn’t even be men/women enough to make it a fair hunt..Trophy my ass…Unless it’s a trophy for the biggest piece of shit/coward…

Disgusting! These pathetic excuses for human beings need to be re-educated! Th

Heartbreaking,all for the sake of mans greed & pathetic ego! Can’t watch video,as it would kill me,cant abide this senseless killing of magnificent animals:(:(:(

Rich scumbag pos ..get a life …

Regardless that they’re being “captive bred” specifically for these ridiculous canned hunts, all of these “trophy” animals are on the Endangered Species list…meaning they are on the fast track to extinction. Trophy and sport hunting of endangered species is the ultimate in human arrogance and complacency. These so-called hunters are utterly sickening.