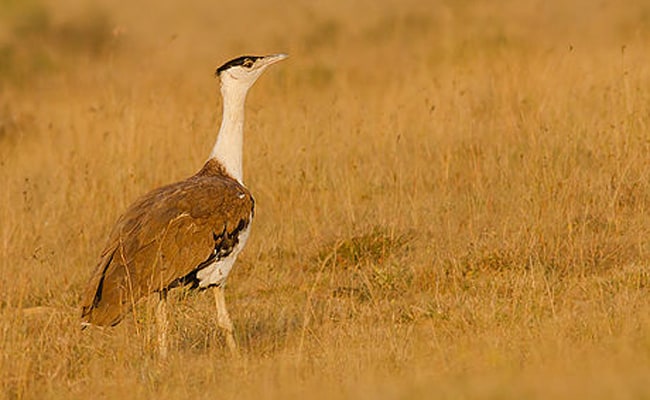 The great Indian bustard may become the first bird to go extinct in India since the country gained independence in 1947.

In 1960 the bird was already recognized as a legally protected endangered species, but its population was estimated to be just 1,250 individuals – and dropping fast.

Fearing that the species would decline even more, ornithologist Sálim Ali proposed naming the great Indian bustard the national bird of India as a way to conserve the species. But that didn’t happen; instead, the peacock became India’s national bird.

And now Ali’s fears have come true. In 2018, Indian scientists warned that the species was dangerously close to extinction, with an estimated remaining population of around 150 birds. The International Union for the Conservation of Nature (IUCN) has labelled the bustard “critically endangered.”

The bustard, which stands three feet tall and weighs close to 40 pounds, is found mostly in the Thar desert in the northern state of Rajasthan, which borders Pakistan.

But there’s more bad news. In 2018 scientists found only one juvenile male bird at the bustards’ traditional breeding grounds in the Indian state of Gujarat.

“No adult breeding males have been observed on their known breeding territories in last two years, “ says Devesh Gandhi, deputy director of The Corbett Foundation, a group dedicated to the preservation of India’s wildlife.

Historically, one reason for this bird’s decline is habitat loss, due to the development of roads, mines, canals and towns. The Indian government has also converted grasslands into wooded areas, which are not favorable to the ground-dwelling species. Poaching has also contributed to population decline, with the bird being sought for its meat and for sport.

And now there’s a new threat: power lines. Over the past few years, Rajasthan and other states have installed high-voltage power lines in the path of the bustard’s aerial corridors. Due to their heavy weight and limited vision, the birds have trouble avoiding the lines. Too often, they fly into them, get electrocuted and die.

According to a recent study, at least five birds per cable are killed each month, which adds up to around 220,000 birds dying every year. At least three of the birds that died in 2017 were great Indian bustards. That might not sound like a large number, until you realize that are only 150 of this species in existence.

The Ministry of Environment and Forest has proposed the creation of an eco-sensitive zone in the great Indian bustard sanctuary in Solapur, Maharashtra, but it needs political will to make this happen.

As The Corbett Foundation recently wrote on Facebook, “It is a national shame that we are allowing this species to go extinct despite knowing what should and can be done to prevent this.”

This May, Care2 is launching a campaign to protect endangered species. Join us to save these real-life fantastic beasts!

Alarmed by the idea that this great Indian bird is so close to extinction, the Care2 team decided to create a petition, asking the Rajasthan Renewable Energy Corporation and the Forest Department to place these power lines underground.

As the petition notes, “With such low numbers, any dent in the population could spell catastrophe and push a bird that’s already close to extinction to the point of no return.”

If you agree that it’s imperative to save the great Indian bustard before it’s too late, please sign this Care2 petition asking the Rajasthan Renewable Energy Corporation and the Forest Department to take action immediately.

This article was first published by Care2.com on 9 May 2019.