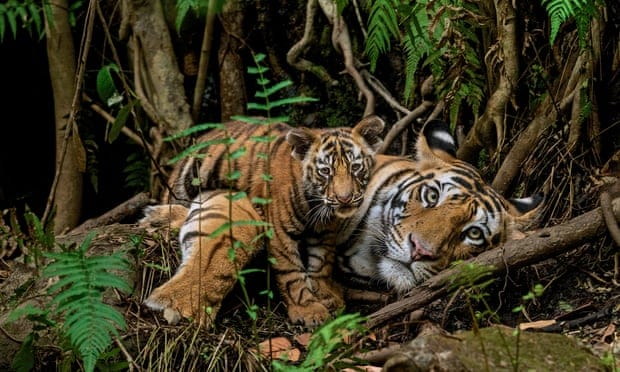 For trophy hunters, the big five are the toughest, most dangerous animals to kill, but a photography project has turned the meaning of shooting on its head, creating a new list of the five most fantastic creatures to capture on camera.

More than 50,000 people from around the world voted for animals they most liked seeing pictures of as part of the New Big 5 wildlife photography list. The crowning creatures are elephant, lion, polar bear, gorilla and tiger, all of which are keystone species listed by the International Union for Conservation of Nature as either critically endangered, endangered or vulnerable.

As part of the project, these creatures are being promoted as global ambassadors for all wildlife and the difficulties it faces.

“They’re a stark reminder of what’s at stake if we don’t change our ways,” said photographer Marsel van Oosten, who is involved in the project.

“That’s how I will look at each of them, as beautiful representatives of the many thousands of other, often lesser-known species who desperately need our help.”

The project aims to use photography to raise awareness about the threats to wildlife from habitat loss, poaching, human conflict, the illegal wildlife trade and the climate emergency.

It is also about celebrating the lives of these animals, and our connection with the natural world. TV presenter Chris Packham said: “It’s the perfect way to instigate a transition between something which is no longer ethically, morally, or scientifically acceptable, and transforming people’s passion from something which is dead to something which is alive. If hunters were all shooting with cameras, that would be significant progress.”

The traditional big five list of elephant, lion, rhino, leopard and Cape buffalo has roots in the colonial era and was created because these were the hardest animals to hunt on foot. The term is widely used on African wildlife safaris, but the extremely divisive practice of trophy hunting continues.

Photographic tourism could bring money to pay for conservation work that benefits animals on the wildlife bucket list, creating a positive alternative to trophy hunting, said photographer Graeme Green, who organised the initiative. Although Green would like to see a future without trophy hunting, the New Big 5 is not an anti-trophy hunting campaign. “The real mission of the project is to use this idea to get people thinking and talking about wildlife,” he said.

While the big charismatic species are great ambassadors, we need to increase awareness about all creatures, said photographer Ami Vitale, another contributor to the project. “This planet is our only shared little life raft and we are on it together. We must all do everything we can to care for the plants and critters that inhabit the Earth. They are fellow travellers and our only friends in this enormous universe. Our future happiness depends on all of them,” she said.

This article was first published by The Guardian on 17 May 2021. Lead Image: Tigers in Bandhavgarh national park, India, by Steve Winter. Photograph: Steve Winter/New Big 5 project.