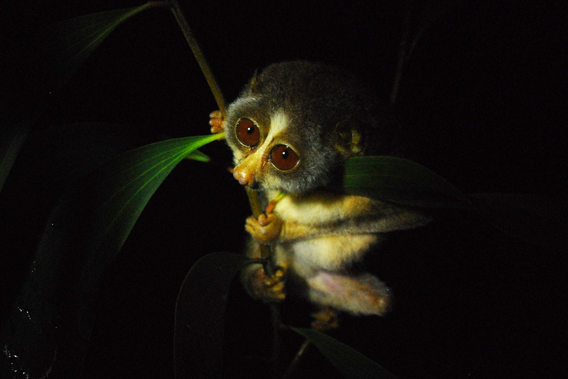 Caught in a beam of torchlight, the eyes of the slender loris reflect back a striking glow. In an effort to better understand these shy, nocturnal primates, a team of researchers set out to the Western Ghats of India. The resulting paper: Moolah, Misfortune or Spinsterhood? The Plight of the Slender Loris (Loris lydekkerianus) in Southern India was published in the Journal of Threatened Taxa in January of 2013. Forest walks and interviews with the Kani people, who live in close proximity to the lorises, supported evidence of a surprising new threat to the lorises: photographers.

Despite their protected status the soft and wide-eyed loris, popularized by viral YouTube videos and Internet photos, has become a major commodity in the illegal pet trade. But, their live insect diet makes caring for them difficult and incredibly sensitive lorises do not fare well in captivity. Lorises are also surrounded by myth and folklore. Some lorises are captured for their purported medicinal properties, though this is becoming less common. Among the Kani people, at least, the loris is seen as a bad omen; an unmarried woman who glances at the animal is doomed to life-long spinsterhood, and a loris sighting in the forest predicts bad luck for the harvest of non-timber forest products.

Photographers from around the world are eager to capture shots of this charismatic primate, yet the elusive and strictly nocturnal habits of the slender loris make them difficult to track down. Photographers are willing to pay substantial sums for a “managed” photo shoot with the animals. The Kani use bright lights, scare tactics, and even tree cutting methods to capture the animals. Locals often bring the captured loris into the village where it is held for several days (in a place where it will not be mistakenly glanced upon by a women). Once a shoot is completed, the loris is typically re-released just outside of the village, far from their capture sights and away from a contiguous strip of forest that could shelter their passage back to ideal habitat.

According to the paper, “This type of photography practice not only endangers a species protected under the Indian Wildlife Act, but also promotes cultural and emotional discomfort among local communities, whose proximity to wildlife only presents an increases risk to wildlife conservation in this case.”

“If animals are to be handled I would suggest prior permission be taken from the concerned Forest Department,” lead author Arun Kanagavel told mongabay.com. “Capture and release sites should also be the same. As far as possible handling these shy primates should be disallowed and instead loris-watching treks can be arranged to observe them in the wild and photograph them naturally. Also the type of torch lights that would go on to be used during such initiatives would need regulation.”

Aside from the regulation of photography, handling, and torch use, the paper calls for urgent surveys to understand the distribution and status of the slender loris in the Western Ghats to better inform conservation strategists.

India’s Western Ghats boast a treasure-trove of biodiversity, and its rainforests have been recently listed as a UNESCO World Heritage site. Yet despite its biological riches, or perhaps because of, the Ghats are riddled with conservation controversies. A tenuous balance between wildlife and agriculture has played out for centuries, yet deforestation, illegal harvesting of non-forest timber products, poaching, and the pet trade have taken their toll. The wide variety of peoples, bioregions, strategies for land management and inconsistent environmental regulations have made both science and conservation in the area a complicated matter.

Says Arun Kanagavel, “The project revealed to me how crucial human communities are while considering wildlife conservation. The indigenous locals were so adept at spotting the primates. The inter-dependence of urban and local indigenous communities came to the forefront.”