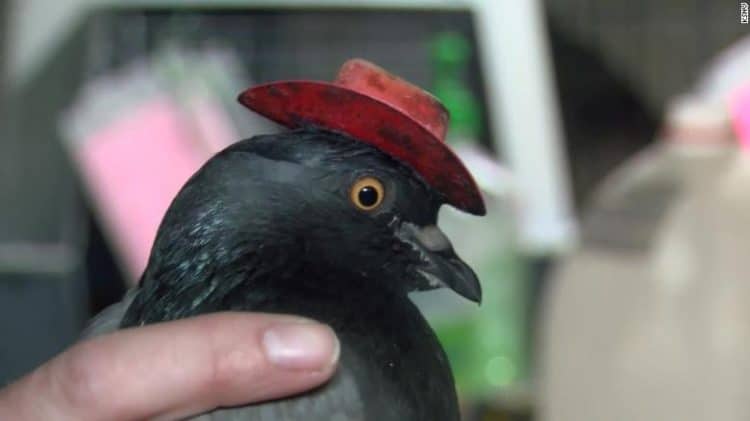 The pigeons that went viral in December for wearing cowboy hats have been rescued. The Las Vegas birds with hats attached to their heads led to a conversation about animal abuse. Many users tweeted to ask that they be freed from their hats.

In early December, a Facebook video posted by user Bobby Lee went viral that showed pigeons wearing cowboys hats. The video was posted the same week that the rodeo was in Las Vegas. As the internet shared the video, a pigeon activist group decided to take action and save the birds.

According to CNN, the pigeons were captured with a trap so they hats could be removed and they could be let back into the world.

Mariah Hillman, a co-founder of Lofty Hopes, told CNN it looked like the hats had been glued to the birds’ heads.

“It’s definitely a concern,”she said. The Las Vegas Review Journal reported that a veterinarian had removed the hats safely. Hillman told the paper, ” They’re both doing well. They’re happy to have their hats off.”

Hillman captured one of the birds and it appeared that his hat had pulled off some of his feathers and was hurting him.

The rescue group is still looking for a third pigeon that was forced to wear a hat.

No one seems to know how the birds got the hats. See photos of the hats and pigeons shared by Lofty Hopes:

This article was first published by OneGreenPlanet on 26 December 2019.

There are some sad people around.

If only people could apply their “creativity” toward intelligent,compassionate pursuits instead blatant cruel and stupid such as this