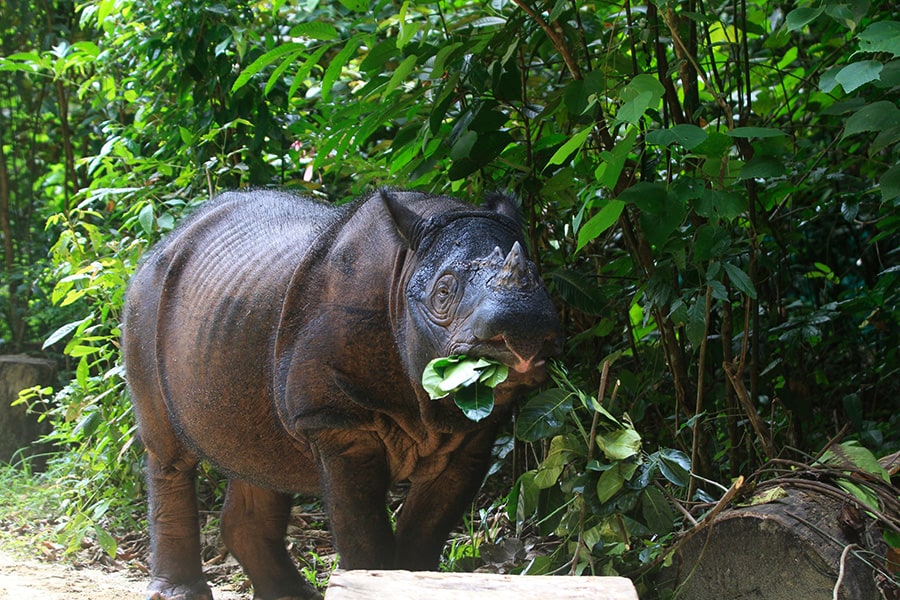 BANDA ACEH, Indonesia — Conservationists are calling for a Sumatran rhino habitat at the northern tip of the Indonesian island to be fully protected from planned road-construction projects.

Officials in the province of Aceh have allocated 2.4 trillion rupiah ($164 million) for the development of 12 roads across the province through 2022. Governor Nova Iriansyah says the roads will improve economic connectivity between the province’s eastern and southwestern coasts. They will include sections of the Ladia Galaska road that will serve as an overland route between two of the busiest international shipping routes in the region, namely the Indian Ocean and the Malacca Strait.

But many of these planned road projects are expected to cut through the Leuser Ecosystem, a vast swath of tropical rainforest that remains the last place on Earth where critically endangered rhinos, tigers, orangutans and elephants co-exist in the wild. Conservationists say they are particularly concerned about the impacts that the road development will have on the population of the Sumatran rhino (Dicerorhinus sumatrensis) there.

“Almost all the roads that cut through the Leuser Ecosystem are prone to landslides and flash floods,” said Muhammad Nur, director of the Aceh chapter of the Indonesian Forum for the Environment (Walhi), the country’s biggest green NGO.

“When forest is being destroyed, surely that will increase [the risk of] flooding and landslides in the areas where road development is located,” Nur said.

Nur added that the expansion of the road network into previously untouched areas tended to usher in further encroachment, including by poachers and land grabbers. Mongabay Indonesia recently visited parts of a planned road connecting the districts of Southwest Aceh and East Aceh that cuts through Gunung Leuser National Park. Even though this part of the Leuser Ecosystem is a protected area, there were clear signs of clear-cutting on the periphery of the forest.

“Now there are plantations left and right in the forest because encroachment has hardly been prohibited,” Nur said.

The Sumatran rhino, an elusive and solitary animal, is particularly sensitive to human encroachment in its habitat, said Rudi Putra, a biologist and chairman of the Leuser Conservation Forum’s (FKL) board of trustees. Road development in areas of the Leuser Ecosystem where the rhinos live would fragment their habitats and distress them, he said.

“Habitat is an important component for Sumatran rhinos and other wildlife for them to eat, drink, breed and socialize,” Rudi said, noting that an individual rhino needs up to 6 hectares (15 acres) of foraging area every day.

The rhino population in Leuser is split up across four habitats. The area is touted by experts as the most promising site for wild Sumatran rhinos as it holds one of the largest numbers of the species. But of the four populations, Rudi said, only one has recorded natural births every year.

A Sumatran rhino population that still records natural births in the wild is crucial for the survival of the species. Many rhino experts say that natural breeding can only happen when the animals feel safe enough to mate, and therefore requires the full protection of all known habitats.

The species’ global population is fewer than 80 individuals. Apart from perhaps as many as a dozen in Indonesian Borneo, all live on Sumatra. They all survive in small and isolated populations, with some considered to “doomed” as they are not viable enough to survive in the long term.