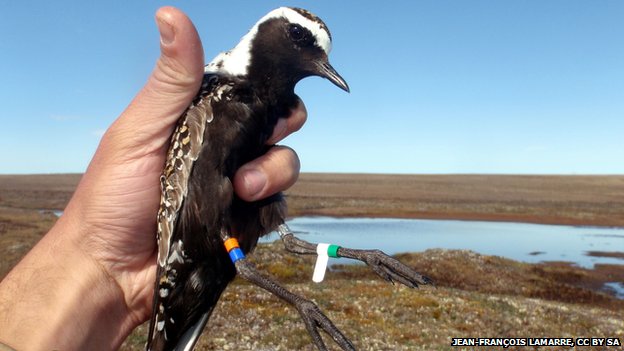 Birds migrating between the Arctic and South America could be responsible for distributing plants across the tropics, according to new research. Scientists screened wild shorebirds’ feathers before migration and found plant parts embedded. Birds are known to disperse seeds and small animals across local, regional and continental ranges. It is the first evidence of plant fragments being carried in the plumage of long-distance migratory birds.

A team of ten biologists captured birds at their arctic breeding grounds and examined their breast feathers under a microscope. Their findings are reported in the journal PeerJ.

They found 23 plant fragments trapped in the feathers of seven of the birds. The plant parts were all thought to be able to grow into new plants, therefore suggesting they could establish new populations.

If the findings are applied to entire populations of migratory birds, potentially hundreds of thousands of plant parts may be being transported across the equator every year. The team say this could explain the large number of plant species found living solely in the world’s most northerly and southerly points.

Emily Behling, from the research team, said: “We really had no idea what we might find. Each feather was like a lottery ticket, and as we got further into the project I was ecstatic about how many times we won.”

The team found spores, plant pieces and mosses which could help explain the distribution of cyanobacteria, fungi and algae. Mosses are particularly resilient plants, with at least 60 species found in the Arctic and southern-most South America but nowhere in between.

About half of all moss species can self-fertilize to produce offspring and many can grow as clones. It is known to take just one dispersal event for them to establish a new population.

“Mosses are especially abundant and diverse in the far northern and southern reaches of the Americas and, relative to other types of plant, they commonly occur in both of these regions,” said Lily Lewis, co-author of the study.

“Yet they have been largely overlooked by scientists studying this extreme distribution. Mosses can help to illuminate the processes that shape global biodiversity.”

The researchers found plant fragments on the feathers of semipalmated sandpipers, red phalaropes and American golden plovers, whose behaviour in their northern breeding grounds is likely to be responsible for them picking up plant parts.

All three breed in coastal tundra where mosses and other bryophytes are common. The birds construct shallow nests by scraping the ground with their breasts, feet and beaks, and then line them with plant materials.

Miss Lewis said: “When we started the project, we weren’t sure we would find anything. Dispersal events are thought to be very rare, and thus we were surprised at the diversity and abundance of things we found in the feathers.”

The team is now beginning to use DNA markers to identify which species of plants are trapped in the feathers and are undertaking growth experiments to assess the viability of recovered plant fragments to see if they could establish new populations.

This article was written by Zoe Gough for BBC Nature News.