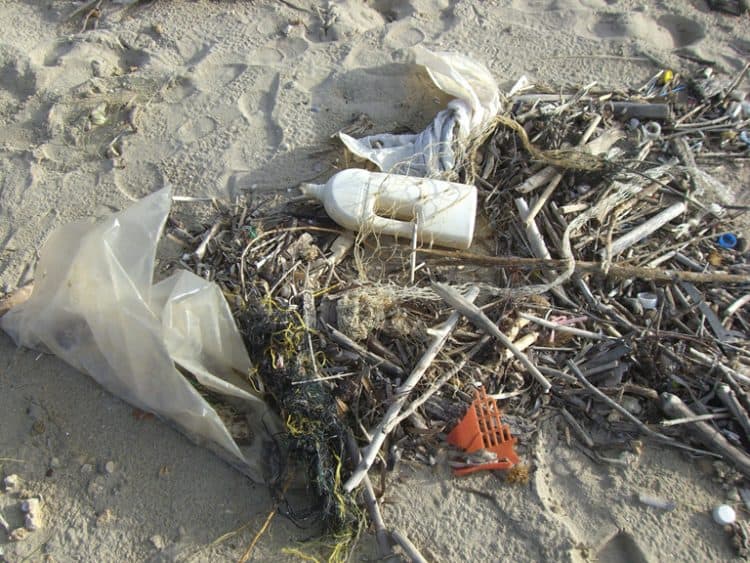 Researchers who examined 50 marine mammals that had washed up on Britain’s shores say they found microplastics in the guts of every single animal.

In a paper published in the journal Scientific Reports last month, a research team from the UK’s University of Exeter and Plymouth Marine Laboratory detailed their findings after studying the digestive tracts of 50 individuals from 10 species of dolphins, seals, and whales that had been stranded on the coast of Britain.

The researchers sought to determine the amount of microplastics and polymers the animals might have ingested as well as whether plastics are expelled from their bodies (via defecation, for instance) or if they are retained within their digestive tracts.

“Microplastics were ubiquitous with particles detected in every animal examined,” the authors of the study write. Just 5.5 microplastic particles were found in each animal, on average, which suggests that the particles might be simply passing through the marine mammals’ bodies, the researchers said. But the animals’ stomachs were found to contain more microplastics than their intestines, pointing to “a potential site of temporary retention,” they added.

“It’s shocking — but not surprising — that every animal had ingested microplastics,” the study’s lead author, Sarah Nelms of the University of Exeter and Plymouth Marine Laboratory, said in a statement. “The number of particles in each animal was relatively low (average of 5.5 particles per animal), suggesting they eventually pass through the digestive system, or are regurgitated. We don’t yet know what effects the microplastics, or the chemicals on and in them, might have on marine mammals.”

The vast majority of the particles discovered in the marine mammals’ guts — 84 percent — were fibers, which come from sources like clothes, fishing nets, and toothbrushes. The other 16 percent were plastic fragments, which could have possibly come from food packaging and plastic bottles.

“Microplastics in the marine environment originate from a variety of sources, including fragmentation of larger macro-plastic debris, pre-production pellets (nurdles) spilled during transportation and fabrication, outflow of wastewater containing microbeads from cosmetics and fibres from the washing of synthetic textiles, as well as road-run-off containing fragments of vehicle tyres and marking paint,” Nelms and co-authors note in the study.

Nelms and team also write that they found a possible correlation between cause of death and microplastic abundance, as the animals included in the study that had died due to infectious diseases “had a slightly higher number of particles than those that died of trauma and other drivers of mortality.”

It’s not possible to reach any firm conclusions regarding the significance of this observation, according to Professor Brendan Godley of the Centre for Ecology and Conservation at the University of Exeter, a co-author of the study. Still, he said, “Our findings are not good news.”

Godley continued: “We are at the very early stages of understanding this ubiquitous pollutant. We now have a benchmark that future studies can be compared with. Marine mammals are ideal sentinels of our impacts on the marine environment, as they are generally long lived and many feed high up in the food chain.”

The researchers write in the study that “further research is required to better understand the potential chronic effects of microplastic exposure on animal health, particularly as marine mammals are widely considered important sentinels for the implications of pollution for the marine environment.”

It’s been estimated that as much as 8 million metric tons of plastic waste makes its way from land into Earth’s oceans every year. Previous studies have shown that filter-feeding marine megafauna like baleen whales, manta rays, and whale sharks are particularly susceptible to microplastic pollution in the world’s oceans. Researchers have also previously found microplastics in the guts of humans around the globe.

Louise Edge, head of Greenpeace UK’s ocean plastics campaign, said of the present study’s findings: “It is ominous that every single marine mammal tested was found to have microplastics in their digestive system, and it shows the scale of plastic pollution in our seas. This is yet more evidence that governments and big businesses need to focus their efforts on drastically reducing the use and waste of plastics, to stem the flow of plastic pollution into our rivers and oceans and into the mouths of marine wildlife.” Greenpeace Research Laboratories provided support to the research team behind the study.

Study co-author Dr. Penelope Lindeque, head of the marine plastics research group at the Plymouth Marine Laboratory, said it was “disconcerting” that microplastics were found in the gut of every single animal included in the study and echoed the call for reducing the amount of plastic waste dumped into Earth’s oceans.

“Indeed, from our work over the years we have found microplastic in nearly all the species of marine animals we have looked at; from tiny zooplankton at the base of the marine food web to fish larvae, turtles and now dolphins, seals and whales,” Lindeque said.

“We don’t yet know the effects of these particles on marine mammals. Their small size means they may easily be expelled, but while microplastics are unlikely to be the main threat to these species, we are still concerned by the impact of the bacteria, viruses and contaminants carried on the plastic. This study provides more evidence that we all need to help reduce the amount of plastic waste released to our seas and maintain clean, healthy and productive oceans for future generations.”

This article by Mike Gaworecki was first published on Mongabay.com on 21 Feb 2019.