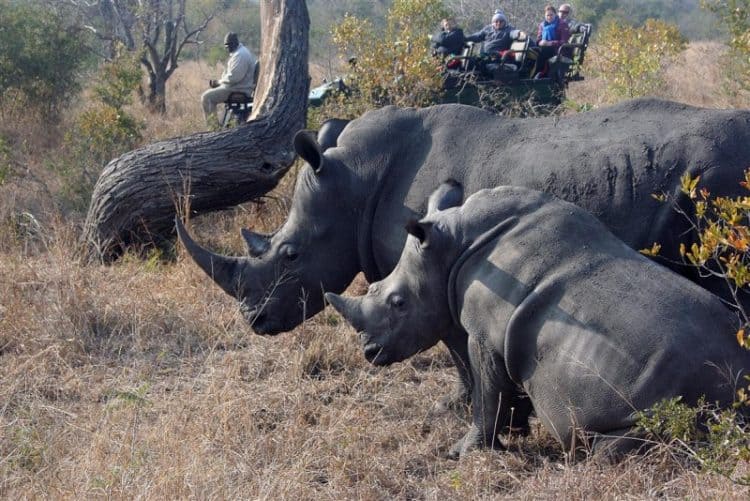 MHALA – A rhino poacher who killed a cow and her baby rhino in 2015 was sentenced to an effective 30 years in prison on Wednesday.

Norman Khoza (35) was convicted on eight poaching and firearm-related charges in the Mhala Regional Court.

The two rhinos were poached at Nwanetse in the Kruger National Park.

To secure the sentence, state prosecutor Adv Ansie Venter argued that Khoza showed a lack of remorse and called the killing of the mother and baby “brutal and heartless”.

She also cited the plight of rhinos, the immense strain poaching put on rangers, its detrimental effect on the economy, and the public outcry for justice for the rhinos in intensification of sentence.

Regional court magistrate Elmarie Theron gave Khoza the maximum sentence of 10 years per rhino because he did not show any remorse. It was a female adult which would have been able to have many more calves, and because the other was still a baby.

Khoza was further sentenced to three months’ imprisonment for being an illegal immigrant and two years for trespassing in the park. These are to run concurrently.

He also received three years for possession of the firearm, eight years for intent to use it in crime and two for possessing the axe and knives. These are to run concurrently with the 10 years for hunting the calf.

Khoza will serve another 18 months for possession of unlicensed ammunition, bringing the total to 30 years to be served.

The sentence was welcomed by the National Prosecuting Authority.

“I am very happy about the sentence,” said Monica Nyuswa of the NPA. “It sends a strong message that these crimes will not be tolerated.

“The presiding officer correctly said during sentence that a court is in the service of the community and is also the voice for animals who cannot speak for themselves.”

This article was first published by Lowvelder.co.za on 2 August 2019.

Finally a sentence that nearly fits the crime. It should be life!

Why hunters who kill rhinos are not prosecuted!They are just as criminal as poachers!

Not enough time but at least something! maybe in jail someone will shove something up their damn asses!

That’s great! Of course nothing brings these poor souls back.

GOOD! make the consequences harsher and people may just be discouraged from killing these beautiful creatures.

why not crush his hands too?

justice will be served!!!!!

I hope they get more rewards from their jailmates for this sick cruelty to these beautiful animals. Thank you judge.

Should have gotten the bullet.

I am pleased that this sentence is so severe.
However I feel sure this idiot was sponsored by someone else and this could be commuted if he gives names.

Tragic mommy and baby. 37 years! Should be life. That’s what he took from mama and baby and their family.

Prison is too good for this murderer. He should be hanged – or given the same treatment that he subjected these defenceless rhinos to!!

Great news. Finally some justice for this critically endangered species