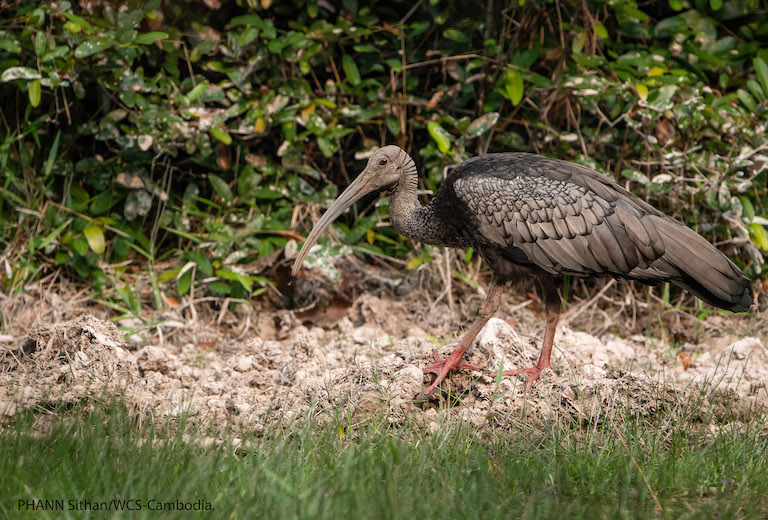 The giant Ibis, a mega-sized bird that can stand more than a meter (3 feet) tall and weigh more than 4 kilograms (9 pounds), was once thought to be extinct in Cambodia. But in 1993, scientists working with the Wildlife Conservation Society (WCS) rediscovered the birds on the border with Laos, and since then, a small, but viable, population has lived in Cambodia, with most in the country’s northern plains. The giant ibis (Thaumatibis gigantea), currently classified as a critically endangered species on the IUCN Red List, is also Cambodia’s national bird.

But two weeks ago, a poaching incident in the Chhep Wildlife Sanctuary, in Cambodia’s Preah Vihear province, took the lives of three giant ibises — equivalent to 1-2% of the global population, according to WCS.

“When you’ve got less than 300 birds, three adult birds are significant,” Colin Poole, regional director of WCS in Greater Mekong, Cambodia, told Mongabay. “They don’t reproduce incredibly fast and they’ve got a relatively small distribution range across northern Cambodia. They’re quite vulnerable to disturbance and they’re quite shy, so three birds is a big issue.”

Poachers had poured an insecticide called carbofuran into a dried-up watering hole in the sanctuary, and the three ibises had taken a drink of the deadly liquid.

“[The insecticide] was banned in Europe in the U.S. quite some time ago,” Poole said. “It’s really toxic to birds, but it’s really cheap and easy to get hold off.”

The poachers were likely after the birds’ meat, despite the fact that it would be contaminated by the poison.

“They basically have the idea that if they take the guts out relatively quickly, it’s fine,” Poole said. “And they either consume it themselves, or they sell it in the market, and nobody knows where they got them from.”

While poaching incidents have been recorded in northern Cambodia in the past, there’s been a sudden upsurge in poaching since the start of the COVID-19 pandemic, which has shut down ecotourism in the area. In addition to the three ibises recently killed, more than 100 painted storks (Mycteria leucocephala) were poached at Cambodia’s Prek Toal sanctuary, a Ramsar Site, in late March, according to WCS. Hunters have also poisoned white-winged ducks (Asarcornis scutulata), sarus cranes (Antigone antigone), and many other bird species in recent weeks.

“As income streams dry up, what alternatives do people have but to turn to cutting trees or hunting birds?” Poole said. “It’s going to be a really challenging time, and we need to work out how we can get direct support into these villages so they don’t need to turn to natural resources for survival. We’re looking at ways of trying to increase employment opportunities — to employ more rangers, employ more bird guards, employ people to upgrade and fix the ecotourism facilities we have.”

This rise to poaching during the COVID-19 crisis isn’t a problem unique to Cambodia, but a trend happening across Southeast Asia, Poole said.

“I’ve been talking to some of my colleagues, and we’re all seeing an increase in issues like poaching, hunting, illegal land clearance, and we’re wondering how to deal with it,” he said. “Things are probably going to get worse before they get better, so I think that we as conservationists have to work out how we can engage with people and help them get through these difficult times so we all have something left to … conserve and to benefit from in six months or 12 months’ time.”

While the killing of a giant ibis can land a poacher into jail for about 5 years, Poole said he believes that education and community engagement, rather than punishment, are the best ways to curb these incidents.

“We’ll continue to do education work in the villages,” he said. “We’re trying to help people understand the status of the birds, and the fact that a lot of ecotourism is linked to the continued survival of these birds, and also the long-term health risks of eating birds that have been poisoned.”

WCS also plans to work with its local partner, Sansom Mlup Prey (SMP), to expand its rice growing program that rewards farmers for helping to protect the giant ibis and its critical habitat.

“The rice program is doing really, really well,” Poole said. “We’re thinking about ways in which we can try and … get more farmers engaged in that in the next month as they start to plant rice. Again, it’s a way of guaranteeing them income that’s outside of hunting and deforestation.”

This article by Elizabeth Claire Alberts was first published on Mongabay.com on 21 April 2020.

Once the poachers have been caught, make them eat the poison….Karma payback and ridding the world of depraved, disgusting pieces of human trash.

That’s is awful. I hope they rot in hell.