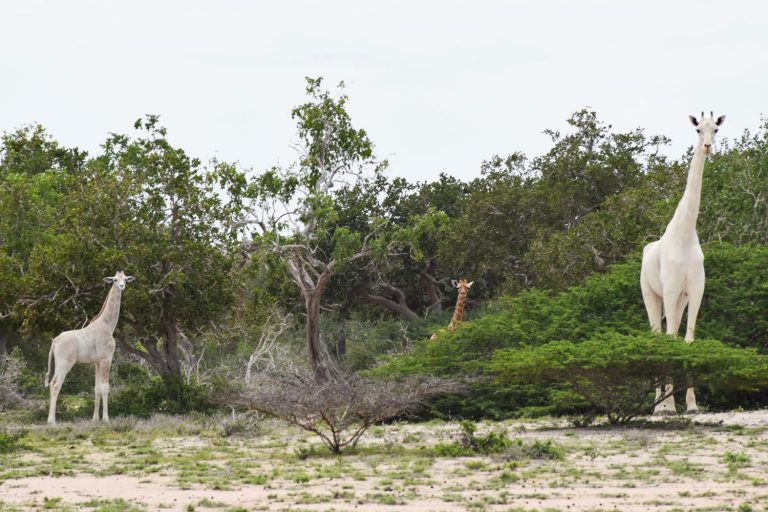 Poachers have killed two rare white giraffes in Kenya according to a group that worked to protect them and their habitat.

On Tuesday, the Hirola Conservation Programme reported that the mother giraffe and her calf were found dead after a long absence. Wildlife officials said the state of their remains indicate the giraffes have been dead at least four months.

“This is a very sad day for the community of Ijara and Kenya as a whole. We are the only community in the world who are custodians of the white giraffes,” said Mohammed Ahmednoor, manager of Ishaqbini Hirola Conservancy in northeastern Kenya, in a statement.

“This is a long term loss given that genetics studies and research which were significant investment into the area by researchers, has now gone to the drain. Further to this the white giraffe was in a big boost to tourism in the area.”

The white giraffes are leucistic — not albino — meaning they have a genetic condition that inhibits pigmentation in skin cells. Albinos lack melanin throughout their bodies.

The mother and calf were first reported in June 2017 by community members near the Ishaqbini Hirola Conservancy in Garissa county in northeastern Kenya. The pair attracted global attention when the Hirola Conservation Program released a video.

“These rare snow white giraffes shocked many locals including myself but these gave us renewed energy to protect and save our unique wildlife,” said Abdullahi H. Ali, the founder of the Hirola Conservation Program, in the conservancy’s blog post at the time of the video’s recording.

“In partnership with local communities, relevant authorities in Kenya and international partners, we promise to protect these beauties and their vital habitat.”

Giraffe populations are collapsing across Africa: Their numbers plunged 40 percent over the past 30 years, according to a 2016 assessment by the International Union for the Conservation of Nature’s Red List. Less than 100,000 giraffes are estimated to remain in the wild.

Habitat destruction and hunting are the two biggest threat to various giraffe species.

This article by Rhett Butler was first published on Mongabay.com on 10 March 2020.