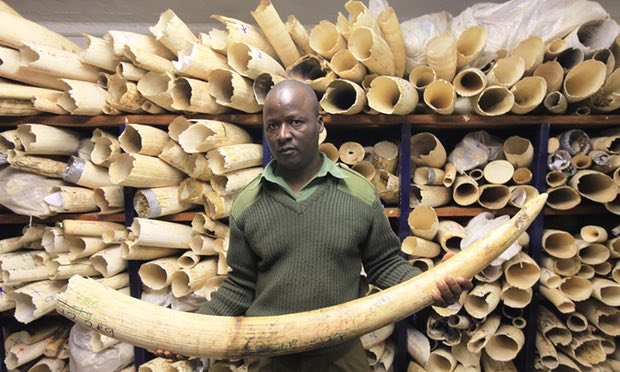 The owners of an antiques shop in Manhattan, New York, pleaded guilty on July 26 for trying to sell $4.5 million worth of illegal elephant ivory from a back room.

On Thursday, some of that confiscated Manhattan ivory and more will be crushed in Central Park as part of a public event organized by the New York State Department of Environmental Conservation and various wildlife groups.

They hope that the crushing of nearly two tons of ivory tusks, jewelry, and trinkets will deter people from buying “white gold” and lead to the eventual shut down of the illegal trade.

At least 140,000 elephants have been lost to the ivory trade and habitat loss in less than a decade, a survey conducted in 2016 showed. International commercial sales of elephant ivory have been banned since 1990, and some countries have begun closing down domestic sales of legal ivory as well.

China, the main market for ivory, announced plans to phase out domestic sales by 2018, and the U.S., another big ivory hub, limited sales of the material last year. Some U.S. states—notably California and New York—have banned sales too.

This latest ivory destruction follows the crushing of roughly a ton of ivory 2015 in Manhattan’s Times Square and six tons in Denver in 2013. More than a dozen nations, including China, France, and Kenya, which burned 105 tons last year, have also destroyed their confiscated ivory.

While organizers tout the events as a powerful way to show that the material should have no worth, opinions regarding the value of destroying ivory are varied and nuanced. So Wildlife Watch asked people who are authorities on elephants, the ivory trade, or conservation to write up to a hundred words giving their thoughts about this.

To most economists, destroying something of market value is anathema. But ethically, elephant ivory should have no material value, and elephant tusks should only be regarded as valuable on living elephants. Back to the economics, crushing a stockpile of confiscated ivory sends a signal to the world that ivory is not for sale. Countries tend to keep ivory in anticipation of being able to sell it in the future. This undermines the credibility of demand-reduction efforts; if the trade is likely to be legalized in the future, any current stigma associated with ivory consumption will be eroded, further fueling poaching.

In some corrupt countries, ivory burns and crushes can act as a way to steal ivory because it is not all carefully recorded in its destruction. Although initially these acts made a statement as a cry for help, such as with the first Kenya burn in 1989 that helped put ivory out of fashion in the U.S. and Europe, many in Asia find destruction to be against their culture and think the ivory could be used for making an artistic monument as a long-term statement instead. It is the Asians, especially the Chinese, whose viewpoints on this issue count the most, as they are the main consumers of ivory. Ivory crushes can detract from what is really needed to save elephants: much greater efforts on law enforcement and improving ways to protect elephants in their natural habitat.

Li Zhang, professor of ecology at Beijing Normal University, who has studied ways for China to shut down its legal ivory trade

Crushing confiscated ivory is such a strong signal to the world that the U.S. takes solid action to combat ivory smuggling and elephant poaching. New York is one of the leading states in the U.S. to legislate to ban its commercial ivory trade. Up to now both China and the U.S. had announced their master plans to close domestic ivory markets. I would be happy to see more governments around the world, especially the EU and Southeast Asian states to crush ivory confiscations and take solid steps to shut down their domestic ivory markets. That will be the day we can say elephants on Earth are surviving poaching for ivory.

I’m skeptical. It’s a PR stunt and reduces storage costs for governments. But after many previous public stockpile destructions, how can yet another one end the poaching that feeds the persistent demand for illegal ivory? By now surely the conservation message is out? Ongoing destructions could backfire, reinforcing perceptions of ivory’s scarcity and supporting high black market prices. And doing this doesn’t generate sustainable financing for African parks, where it is desperately needed: It simply entrenches elephants as aid-dependent liabilities on a continent where they are losing ground to rapidly growing human populations, in relentless competition for space and resources.

Paula Kahumbu, a National Geographic Emerging Explorer and CEO of WildlifeDirect, an international conservation group based in Kenya

Africans thank the U.S. government for the ivory crush in New York. It is another important demonstration of success in the war against poachers. It will help maintain the unapologetic message that it is shameful to buy or use ivory. Elephants keep us in a state of perpetual awe with their intelligence and compassion. We must send a message that there will be no ivory trade now, nor ever again in the future. Only when buyers understand that there is only shame in owning ivory, will the perceived value of ivory evaporate. Traders will stop hoarding it, and killers will stop the slaughter. Only then will elephants be safe.

Ivory crushes have long been viewed as bold displays of defiance against the trafficking of wildlife products, but many fail to realize the negative consequences of these events. Crushes lead to the loss of priceless forensic data that could be used to prosecute poachers around the globe, and they also often lead to increased demand for ivory around the world—leading to more poaching. If activists really want to stop poaching, they should work to increase the effectiveness of anti-poaching operations, improve law enforcement in demand countries, and reduce demand among consumers.

Ivory crushes and burns are incredibly valuable. These are physical reminders of the commitment by governments, organizations, and the public to save elephants. The confiscated items that we’re destroying could have massive dollar value if sold on the market, but the crushes make clear that ivory should only be found on elephants. By crushing a ton of ivory in the middle of the world’s most famous public park, New Yorkers are sending a loud message to poachers, traffickers, and dealers who set up shop right here on our streets: We won’t stand for the slaughter of elephants.

This article was first published by National Geographic on 02 Aug 2017.

We invite you to share your opinion whether destroying ivory saves elephants? Please vote and leave your comments at the bottom of this page.

It breaks my heart that collecting ivory isstill going on. I witnessed a burn in Kenya years ago, and am still hoping that this does make a difference

Destroying the ivory drives the market price up. Legally taken ivory in three years has went from being worth approx $800. for a 52 lbs tusk to yesterdays closing process of almost $200,000. USD. Black market prices are out of sight. Recently in Kenya (Last week) a large tusker was found killed with four spears. and tusk removed. Said to say ISIS knows the value and these tusk are now out of Africa.

Serial number the tusk and open the market will flood it and drive prices to nothing!