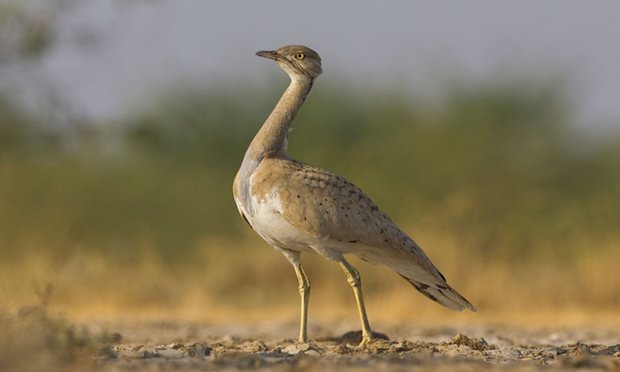 Swaths of habitat used in the winter by the migratory houbara bustard are allocated in blocks to the some of the most senior people in the United Arab Emirates (UAE), Saudi Arabia and other Gulf states, who come armed with specially modified vehicles and radar systems to track the birds.

But an official in the government of the north-western Khyber Pakhtunkhwa province said it had rejected a request from a party of Qatari princes to shoot houbara bustards and would no longer allow such hunts.

On Sunday the politician Imran Khan, whose Pakistan Tehreek-e-Insaf (PTI) partly runs the province, had said he would not allow anyone to hunt houbaras “as it is a protected bird and hunting them is illegal.”

Arab hunters first started coming to Pakistan in the 1960s after houbara stocks in the Arabian peninsula were decimated.

Pakistan’s three other provinces all permit hunting, in spite of opposition from conservationists who say the fast-dwindling houbara population will not survive the annual onslaught.

Although the hunters are only permitted to kill up to 100 birds each, it is difficult to control powerful visitors who reportedly hand out gifts of cash and jewellery to local notables.

More than 30 permits were issued to in 2014 to visitors including presidents, ambassadors and ministers.

In recent years there has been growing public and judicial criticism of the special dispensation given to rich and powerful Arabs to kill birds that Pakistanis have been banned from hunting since 1972. Last year the supreme court ruled that no more hunting licences could be issued.

Officials at the foreign ministry argue the hunts are a longstanding tradition and that conservation policies must be balanced against Pakistan’s need for good relations in the region.

The Sunni kingdoms of the Gulf enjoy enormous influence in Pakistan given the millions of Pakistanis who work there and remit vital foreign currency to their home country.

Nawaz Sharif, the Pakistani prime minister, is especially close to Saudi Arabia, where he lived in exile after losing power in a military coup in 1999.

Houbara bustards, a small fast-flying bird, migrate each winter from the central Asian steppe to their breeding grounds in the deserts of Pakistan. Unfortunately for the houbara, its meat is prized in the Arab world for its supposed aphrodisiac qualities, which has led to the birds being almost wiped out in the Gulf.

Under the convention on international trade in endangered species they are considered to be at risk of extinction, and various countries in the region – including the UAE and Saudi Arabia – have set up breeding programmes to try to revive numbers.

The royal hunting expeditions can last for weeks and require extraordinary logistical operations to keep the sheikhs in the comfort to which they are accustomed.

In some isolated corners of Pakistan the Arab visitors have paid for their own roads and airports to bring in tons of equipment, including adapted vehicles and everything required for their luxuriously appointed camps. Some have built vast desert palaces that sit behind towering walls.

Defenders of the tradition point to the benefits to impoverished communities who have been rewarded by the hunters with new schools and hospitals. But in a rare outbreak of dissent last week, chickpea farmers in Bhakkar district of Punjab province fought with police when they attempted to protest against a group of Qatari houbara hunters who they said had damaged their crop.

This article was first published by The Guardian on 12 Dec 2016.

We invite you to share your opinion whether Arab sheikhs should be allowed to hunt bustards? Please vote and leave your comments at the bottom of this page:

Murdering any animal is wrong.They are not ours to hunt kill or own. No man should think their GOD because their not !

The killing of animals for tradition and corruption is clearly wrong and mainly supported by those involved in benefitting from it. Let us make it quite plain to everyone that animals are not on this planet for human entertainment.

so can they be stopped? Voting a poll is one thing, but does the result have any impact?

Another ridiculous question! No they should not.

Let hunt both bustards and bastards who jail a woman without hajib or kill someone for converting to another religion.

Say ‘No’ to hunting!