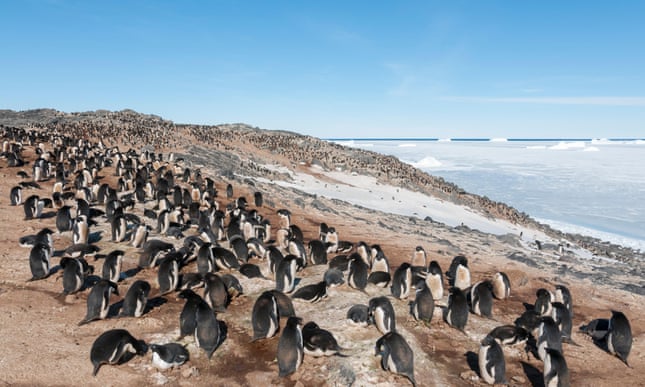 Australia is planning to build Antarctica’s biggest infrastructure project: a new airport and runway that would increase the human footprint in the world’s greatest wilderness by an estimated 40%.

The mega-scheme is likely to involve blasting petrel rookeries, disturbing penguin colonies and encasing a stretch of the wilderness in more than 115,000 tonnes of concrete.

The government in Canberra says the project on the Vestfold Hills of Princess Elizabeth Land is necessary to provide year-round access for scientists and emergency teams to Davis research station, Australia’s most southerly base in Antarctica. Strategic concerns are also a consideration; Australia is keen to counter China’s growing presence on the frozen southern continent.

Environmental scientists say the multi-billion-dollar plan is a waste of money, and could lead to a destructive construction race among territorial rivals.

“It’s unprecedented in the Antarctic in terms of the scale of investment and the impact on the environment. Although it is being done in the name of science, very few scientists are enthusiastic. This is more about flag-waving. It is about firming up Australia’s presence and our claim,” said Shaun Brooks, an environmental scientist at the Institute of Marine and Antarctic Studies of the University at Tasmania.

He estimates the project would add 40% to the existing infrastructure on the continent, which would be damaging and unnecessary.

“I can’t help thinking this will become a white elephant. How can you justify a multi-billion-dollar runway for a base with only 19 people during the winter and which has been maintained without problems since 1957?” Brooks said.

Australia’s proposed new airstrip would be 2.7km long and 40 metres wide, and – unlike existing ice and gravel runways in Antarctica – it would be a permanent structure built on top of the landscape with cement and 11,500 concrete blocks, each weighing more than 10 tonnes.

Pollution, dust, noise and carbon emissions are further problems. Shipping the materials from Hobart is expected to take more than a decade and about 100 icebreaker voyages. The government says the land would be flattened by blasting, crushing and filling with a total 3m cubic metres of earthworks. The project will require the construction of a storage area for explosives, land reclamation from the sea for a new wharf, new tanks for aviation fuel and a 4km access road.

As well as the destruction of wildlife habitat during construction, the operation of the completed airport would bring regular disruption to breeding colonies of southern giant petrels, seals and Adélie penguins.

Multiple studies and case histories have shown the negative impact of aircraft on Antarctic wildlife. In the 1980s, a single mail drop by a low-flying plane led to a stampede at a king penguin colony that caused 7,000 deaths. The Vestfold Hills are home to colonies of nesting Adélie penguins, who must keep stationary on their eggs for long periods if chicks are to hatch successfully. If mothers are panicked by aircraft, eggs can be left exposed to freezing winds and predators.

Among those who have spoken out against the project is Geoff Dimmock, a retired logistics manager. As a former organiser of mail drops and supply missions in the region, he said there was no way for the project to avoid noise disruption and contamination. “I don’t want the hills flattened,” he said. “Environmentally, I think this is a real bad precedent to set. And it’s poor value for money.”

Politicians have asked whether the government will break its own guidelines, which say aircraft should not fly within 2.1km of a penguin colony and that no runway should be within 500 metres of breeding seals.

The Green party senator of Tasmania, Peter Whish-Wilson went further during a parliamentary session in October. How, he asked, could a project with the largest human footprint in Antarctic history align with the stated goal of Australia to promote “leadership and environmental stewardship” in the region?

The Australian Antarctic Division said the environmental evaluation would be scrutinised domestically, submitted to other Antarctic Treaty nations and released for public consultation in Australia and internationally.

“The construction of the aerodrome will have some unavoidable impacts and we are committed to understanding the environmental impacts and implementing mitigation measures to the highest standards possible, and in line with the legislated requirements,” a representative wrote in an email statement to the Guardian.

Plans for a permanent airport at Davis were first floated decades ago, but past governments have balked at the cost. In recent years, the idea has been revived and it is now being pushed forward by the head of the Australian Antarctic Division, Kim Ellis, who is a former military officer and chief executive of Sydney Airport.

The Australian Antarctic Division says a major upgrade is overdue. Flights to Antarctica currently land on a blue-ice runway at Wilkins Aerodrome during the southern summer from October to March. This is increasingly inoperable due to global heating. High temperatures destabilise the runway surface. Closures for this reason used to last for six weeks. Last summer, this increased to 10 weeks.

Plans for a paved runway are now undergoing environmental assessment. Budget discussions are expected in 2022. If approvals are granted, construction would begin in 2023 and run until 2040 at the earliest.

Conservationists say the evaluation process is flawed because it will be signed off by the environment minister Sussan Ley, who is a vocal advocate for the planned runway. She has described it as part of “a new era of Australian Antarctic endeavour”. The government is also conscious that China and Russia are upgrading their bases in the region.

Activists say there are viable alternatives, such as aircraft that use skis instead of wheels for take-off and landing. The US military demonstrated that was possible even in the dark depths of winter by flying into one of its bases with night vision to evacuate an injured explorer in 2008.

“The scale of this is so out of step with our requirements. I think putting up this big flag will encourage others to do something similar,” he said. “It doesn’t align with Australia’s claim to be an environmental leader. Antarctica is special. Everywhere else in the world, you measure wilderness by what’s left. In Antarctica, it’s still the other way round.”

This article was first published by The Guardian on 31 December 2020. Lead Image: Adelie penguin near Davis research station, on the Vestfold Hills, where the new airport and runway are planned. Photograph: Tui De Roy/NPL/Alamy.

We invite you to share your opinion whether Australia should be allowed to construct a new airport and runway in Antarctica? Please vote and leave your comments at the bottom of this page.