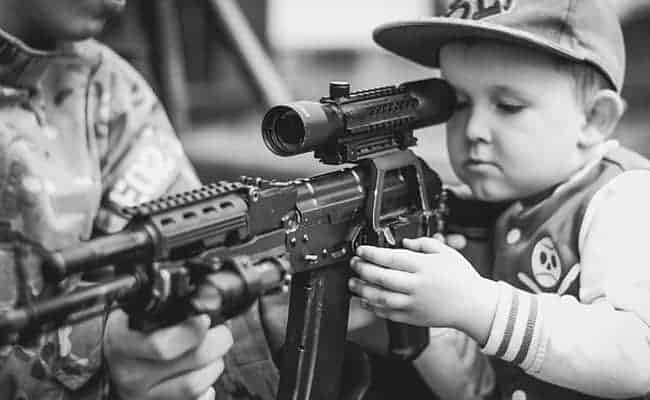 On November 13, a law went into effect in Wisconsin permitting hunters of any age to carry a weapon while participating in a mentored hunt. Yes, you read that right: any age.

This is insanity, but it is also dangerous and hypocritical. These toddlers have to be accompanied by a licensed hunter, but what are the chances that said hunter might just kill more wildlife using his child’s license?

Let’s be real here: one-year-olds can barely stand up or make eye contact, let alone hold a rifle and wield it with accuracy. Nor should they try.

The idea of toddlers with a deadly weapon is scary enough, but there’s another aspect to this: so far in 2017, nearly 700 children under the age of 11 have been killed or injured in firearms-related incidents.

In addition, a recent study published in Pediatrics revealed that every year in the U.S. an average of 5,790 children are taken to the emergency room for gun-related injuries, and that about 21 percent of these are unintended.

Why would anyone want to give hunting licenses to toddlers?

The answer is most likely that Wisconsin’s Governor, Scott Walker, and his Republican buddies, are seeking to please part of their base: their pro-sporthunting, pro-gun rights supporters.

Over 11,000 activists have signed a Care2 petition demanding the immediate reversal of the law.

“It’s just crazy (the minimum age) would go below 10,” said Wisconsin Democratic Gary Hebl. “Absolute insanity that we’re talking about giving a kid a gun at any age so they experience the heritage of hunting. The most important factor is safety.”

Democratic Representative Katrina Shankland agreed: “To allow …. a toddler, a two-year-old (to carry a gun), and I’m not being hyperbolic because someone will allow it, is dangerous,” she said. “Other hunters in the woods are not going to choose to get hurt by a child with a rifle.”

In response, Wisconsin Republicans suggested that parents should be the ones to make the decision as to when their kids are mature enough to handle a rifle.

Frighteningly, it turns out that at least 15 other states have no minimum age requirement, as long as the rifle-toting child is supervised by a licensed adult.

This is the law, even though every day in the U.S., 93 people die from gun violence.

As the Care2 petition states,

“If enough of us speak out, we can make a difference – especially if we make sure to let Governor Walker know that we’d rather spend our money in states that take gun safety, wildlife stewardship, and animal compassion seriously.”

If you agree, add your signature and demand an end to Wisconsin’s dangerous decision to eliminate the minimum hunting age.

We invite you to share your opinion whether babies should be allowed to buy hunting licenses? Please vote and leave your comments at the bottom of this page.