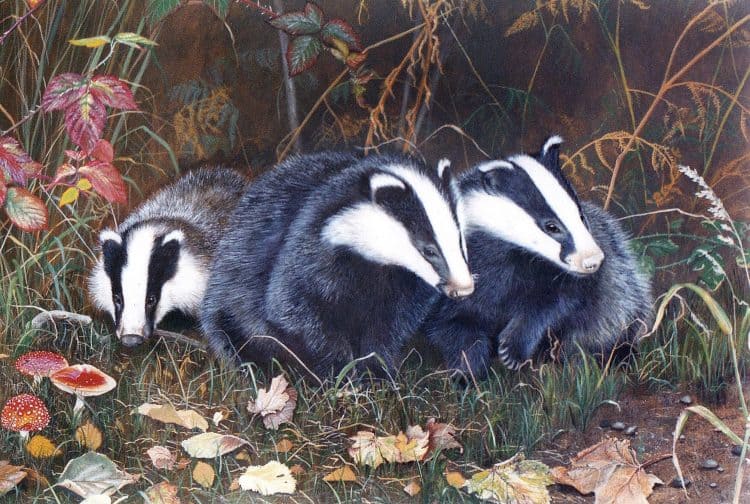 The beam from Lynn Sawyer’s head torch scans the dark trees on a Gloucestershire hillside before settling on a barely visible cage hidden in a thicket of brambles.

“They’ve been trapping and shooting badgers here for six years and they are still doing it,” she says, trudging over a carpet of rotting leaves towards the empty cage.

The trap is ready to be baited with peanuts to tempt any badgers that have survived in the west of the county, where at least 1,879 have been killed since 2013 under a controversial government culling programme to control the spread of tuberculosis (TB) in cattle.

Sawyer’s companion on the patrol, Will Palmer, lowers his torch: “It’s not right to kill a large native, popular, symbolic mammal, based on nonsense, at huge expense.”

Last week an independent review commissioned by the government found culls made only a modest contribution to reducing TB in cattle, which costs £100m a year, mostly in compensation to farmers, with 33,000 infected animals slaughtered in 2017. Instead the review called for more curbs on cattle trading and better biosecurity on farms.

New analysis of the latest government data shows the number of herds hit by bovine TB in the west Gloucestershire cull zone increased by 29% this year, suggesting efforts to control the disease in one of the original cull zones may be failing.

McGill says it is a myth that badgers are making a huge contribution to TB in cattle: “They have done all this killing. They have pretty much exterminated badgers in some areas. But they still have this chronic TB problem in their herds.”

I wouldn’t entertain doing it if it wasn’t humane. You do it at very close range and it is absolutely instant

Yet the cull is set to continue, with farmers and landowners in 11 more areas given four-year licences to trap and shoot badgers this year. Overall there are now 32 culling zones, covering 14,377 sq km, which centre on dairy farming heartlands in the south-west as well as Cumbria and Staffordshire.

One of the most recently introduced culling zones is in the Cotswold hills in south-east Gloucestershire. Under a pink sunset, beef farmer David Barton examines a freshly disturbed badger sett, where nearly 50 of his calving cows are grazing. “I have no doubt badgers play a large role in the problem,” he says. “We know badgers can give it to cattle.”

Barton has fought an on-off battle against TB since 2001, when cattle in his herd first contracted the disease. “My worst test was 34 of these,” he says, gesturing to the cows. “That means they have a green tag in their ears and within 30 days they are gone, and if they are under restriction they are shot on the farm. It’s grim.”

This year Barton helped cull badgers for the first time on his farm. “I wouldn’t entertain doing it if it wasn’t humane. You dispatch them with a 12-bore shotgun and you have a special cartridge with frangible ammunition. You do it at very close range and it is absolutely instant. It will leave a hole in its head about that big,” he says putting his fore finger and thumb together to form a 50p-sized void. That claim is disputed by animal rights groups, who this year leaked to the Observer video footage of a badger which, after being shot at close range in a cage, took almost a minute to die.

Barton accepts farmers have to do more to contain the spread of bovine TB but insists extra controls will only work if badgers are also culled. “It is a horrible thing. Why would I want to kill badgers? It costs me money, time and effort. They don’t cause me any hassle. I don’t have any particular grievance with the badger – other than TB and these cattle,” he says.

A spokesperson for the Department for Environment, Food and Rural Affairs said it had always been clear there was no single measure for tackling the disease: “Bovine TB spreads between populations of both badgers and cattle, which is why our comprehensive TB strategy includes tighter cattle movement controls, more cattle testing and badger control.

“We tailor our testing regime to ensure we use the right methods in the right areas – this includes whole herd surveillance testing in TB-free herds and more sensitive skin testing and blood tests in certain herds where infection is suspected.”

Back on the hillside in west Gloucestershire, Sawyer and Palmer are carrying the trap to a hedge where it will not pose any danger to badgers tonight. “They have as much right to be here as us,” says Sawyer.

This article was first published by The Guardian on 17 Nov 2018.

We invite you to share your opinion whether badgers should be culled to control the spread of tuberculosis in cattle? Please vote and leave your comments at the bottom of this page.