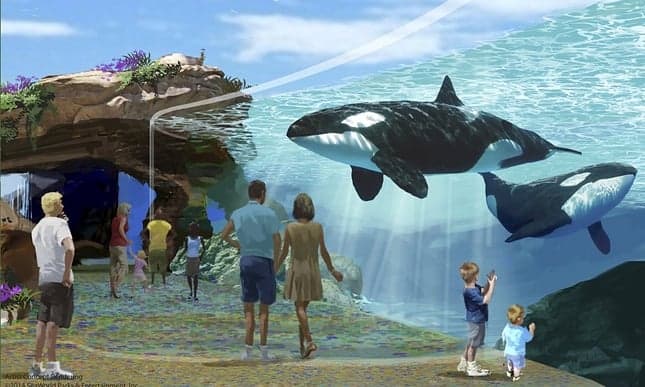 After just three months of life, the Orca calf named Kyara died this week. According to a spokesperson at SeaWorld in San Antonio, she had some “very serious and progressive health issues over the last week.”

It was in March, 2016, that SeaWorld announced that it was ending its breeding program for orcas, meaning that the current orcas in SeaWorld would be the last generation in captivity. The announcement was made in partnership with the Humane Society of the United States (HSUS) and signaled a growing shift in our views on captive cetaceans and other wild animals.

About 16 months later, the last orca born in captivity at SeaWorld, died.

Kyara was born in April of this year to her mom Takara, and had been receiving treatment for an infection, but her health declined rapidly over the past weekend. She probably died of pneumonia, although a post-mortem will establish for sure the cause of her death.

“Kyara had faced some very serious and progressive health issues over the last week that the animal care and veterinary teams had been aggressively treating,” SeaWorld said in a statement.

Kyara was the last whale to be born under the breeding program, and was conceived before SeaWorld said it would stop this program.

SeaWorld has recently changed some of its procedures, including putting an end to orca games at its park in San Diego and planning to end them at other locations, such as San Antonio. But SeaWorld still has nearly two dozen killer whales between these two parks and its Orlando, Florida, location.

Are These Changes For Real?

Former SeaWord trainer John Hargrove had this to say, “I’m grateful Tiki’s calf only lived for 3 months in a concrete box deprived of all things natural. For Takara, my heart is broken in pieces.”

In January of this year, Seaward announced the death of Tilikum, the planet’s best-known killer whale.

Tilikum became a household name in 2013 thanks to the popularity of the documentary Blackfish, which gave audiences a critical look at SeaWorld and how miserable its killer whales seemed to be in captivity.

Measuring over 22 feet long and weighing in at approximately 12,5000 pounds, Tilikum had been the largest orca in captivity. He was estimated to be about 36 years-old.

The bottom line is that it should no longer be legal in the U.S. (or anywhere else) to keep these intelligent, highly social animals in enclosures the size of hot tubs. These are naturally social creatures who have been removed from their families and stripped of their ability to live in the wild, working in unison as a pack and caring for their young together.

On July 24, PETA vice president Colleen O’Brien released a statement; “SeaWorld executives have dollar signs where their eyes should be.”

“Forty orcas have now died on SeaWorld’s watch,” O’Brien added. “It’s time for the abusement park to remove the remaining animals to seaside sanctuaries before the death toll hits 41.”

Speaking to the BBC, Dr. Naomi Rose agreed. Rose is a marine mammal scientist at the Animal Welfare Institute in Washington, D.C.

She describes orcas as the ants of the mammal world. “I think that orcas are more social than people are. I think their family lives are more important to them than they are for us,” she says.

“They cannot be isolated from friends and family because it will in fact cause problems for them. Socially, emotionally, psychologically, physically.”

Capturing orcas and holding them separately from their families is unnatural and wrong. And we still need actual proof that SeaWorld is changing its word and deciding to not breed killer whales in captivity.

If you agree, please sign this petition to add your voice to the call to end killer whales in captivity, and ask your member of Congress to support the ORCA Act, introduced by Adam Schiff (D-CA) to phase out this horrible treatment of such amazing animals.

We invite you to share your opinion whether captivity for all killer whales should be banned? Please vote and leave your comments at the bottom of this page.