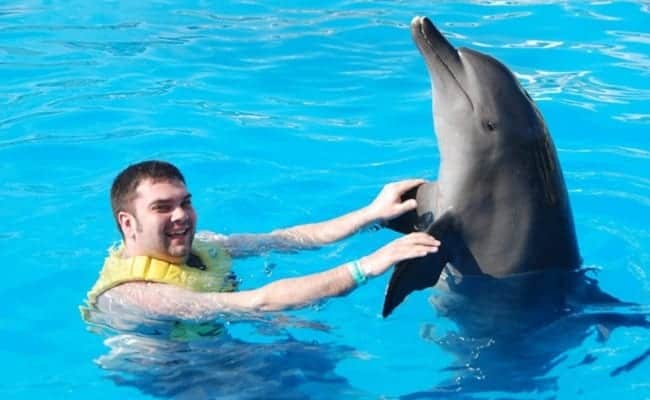 Even before construction began on the swim-with-the-dolphins tourist attraction Dolphinaris Arizona, animal advocates were concerned that it was a bad idea. More than 172,000 people have signed a Care2 petition urging the Dolphinaris company not to open the marine park in Scottsdale, where triple-digit summer temperatures can climb over 120 degrees.

As the nonprofit Animal Defense League of Arizona (ADLA) and other groups pointed out, the desert location leaves the dolphins vulnerable to valley fever. This fungal disease can cause potentially fatal respiratory infections in dolphins that have weakened immune systems caused by the stress of being held in captivity.

Studies have shown that dolphins in captivity can become even more stressed when they’re forced to swim and interact with people, as they are at the seven Dolphinarus marine parks.

The stress has led to behavioral abnormalities, illness, and lowered resistance to disease and death, according to Whale and Dolphin Conservation. For these reasons, TripAdvisor did the right thing last year and stopped booking tickets to attractions that allow people to interact with captive wild animals.

And then there’s the fallout from the 2013 documentary “Blackfish,” which helped to raise awareness of what goes on behind the scenes at marine parks. Attendance at SeaWorld plunged after the film’s release.

Kissing one of our dolphins on the end of their rostrum is a great way to spend a Sunday at Dolphinaris.

Despite these facts and the concerns of tens of thousands of people, Dolphinaris Arizona opened its doors in October 2016. Tragically, those concerns appear to be well founded: Just 11 months later, a young bottlenose dolphin named Bodie died there.

According to a Dolphinaris Arizona spokesperson, 7-year-old Bodie died Sept. 23 after “experiencing a ‘rare muscle disease’ while living in the open-air pools,” ABC 15 reports. The spokesperson said the park’s veterinary team consulted with experts in the United States and Europe, but couldn’t find a cure for the unnamed disease.

A necropsy showed “the same outcome was inevitable,” according to ABC 15.

Immediately after Bodie’s death was announced last week, ADLA, the Animal Welfare Institute and Plea for the Sea launched an investigation. These groups are looking into Bodie’s illness and treatment, and whether other dolphins have gotten sick or died at Dolphinaris Arizona.

“Having participated in grassroots demonstrations opposing Dolphinaris, we realize the public wants and needs to have a clear understanding of the welfare of the remaining dolphins,” Danielle Riley, chairman of Plea for the Sea, said in a statement. “As people become informed of the detriment that these highly intelligent marine mammals suffer in captivity, they are becoming less interested in supporting this inhumane industry.”

“Our team at Dolphinaris Arizona will continue its commitment to providing each of our dolphins with the highest standard of care in accordance to the industry’s best practices, as well as federal and international regulations.

“During this difficult time, Dolphinaris Arizona will continue its mission to educate, inspire and empower our guests through interactions with these amazing animals, encouraging guests to become stewards of the oceans and its inhabitants.”

A much better way to become stewards of the oceans and its inhabitants is by not supporting marine parks that profit by forcing captive dolphins to swim with customers. Please sign and share this petition urging Dolphinaris Arizona to close.

We invite you to share your opinion whether Dolphinariums as tourist attractions should be closed down? Please vote and leave your comments at the bottom of this page.