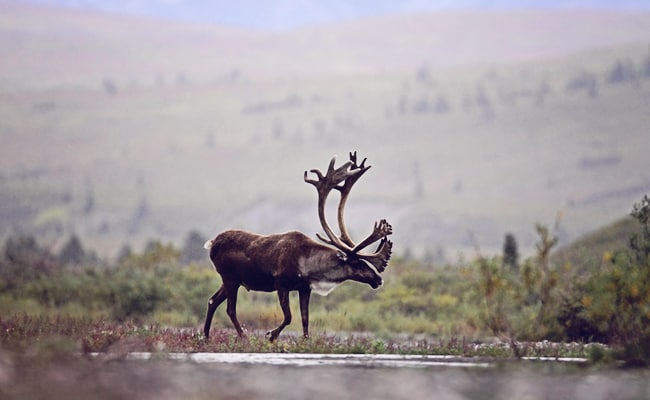 For thousands of years, the Porcupine caribou herd has migrated to give birth and nurse their young in the coastal plain of the Arctic National Wildlife Refuge. The route they take varies every year, but it takes them thousands of miles, making it the longest migration of any land mammal on earth.

The spectacle of thousands of caribou trekking to the land that continuously calls them back goes largely unnoticed by most of us, but scientists, conservationists and Indigenous people have been fighting for decades to ensure that this land remains intact.

Not only does the refuge provide habitat for an amazing international caribou migration, but also for hundreds of species of migratory birds who travel to every state across the U.S. and beyond every year. It’s home to grizzly bears, black bears, wolves, Arctic foxes and muskox, among many other species, and provides critical denning habitat for imperiled polar bears.

The refuge’s rolling tundra, rivers, forests and wetlands stretch to the shores of the Beaufort Sea and is one of the only places on earth that protects both arctic and subarctic habitats that are rich in unique biodiversity.

The coastal plain is considered the heart of the refuge, referred to by the indigenous Gwich’in people who live in and around the refuge as the “the sacred place where life begins.”

Today, it encompasses 18.9 million acres, with eight million acres officially designated as wilderness – where “the earth and its community of life are untrammeled by man, where man himself is a visitor who does not remain.”

Unfortunately, the 1.5 million acre coastal plain, also known as the “1002 area,” is also believed to be sitting on oil and gas reserves that others have been working tirelessly to get their hands on. For more than 30 years, Congress has been pressured to open the coastal plain to oil and gas exploration and development without success. Now, thanks to the Trump Administration, drilling there is a very real possibility.

The passage of the highly controversial Republican-led tax bill last week wasn’t just a disaster on its own – it contained language that opened the door to drilling in the coastal plain. According to EarthJustice, the bill mandates two lease sales, at a minimum of 400,000 acres each, to be held over the next ten years.

Opening this land up to drilling would industrialize this untouched landscape, devastating it and forever altering it, while bringing with it the risk of spills and further damage to this fragile ecosystem.

“A vote for this tax bill was an unconscionable vote for oil leasing in the Arctic Refuge. Those members of Congress who allowed this fast-track tax bill, drafted behind closed doors and passed through a convoluted scheme to avoid full and open debate, have just failed the American people. Polling shows voters do not like this tax bill and oppose drilling in the Arctic Refuge, yet this bill was passed despite the well-known adverse environmental, health and climate consequences of oil and gas drilling. Oil and gas drilling would bring irreversible impacts to an irreplaceable wild area while hampering efforts to change course on climate change,” said Earthjustice President Trip Van Noppen.

Drilling in the Arctic Refuge would be a huge step in the wrong direction. Tell your member of Congress to protect polar bears and the Arctic and oppose drilling today.

We invite you to share your opinion whether drilling in the Arctic National Wildlife Refuge should be banned? Please vote and leave your comments at the bottom of this page.

Only by back door manouvers was trump and gang able to do this. Sad day for this country, the arctic and the environment when this type of bill is passed.