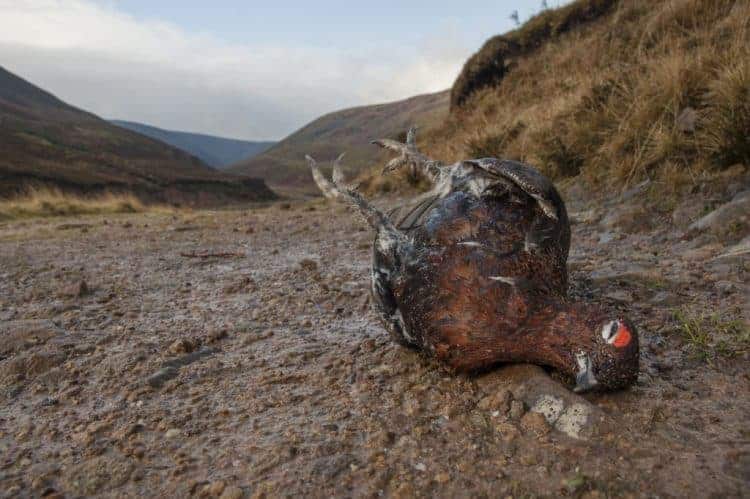 Driven grouse shooting is a field sport of the United Kingdom. It is popular because it provides a challenge due to the rapid flight of the grouse. The grouse shooting season extends from 12 August, often called the “Glorious Twelfth”, to 10 December each year. Shooting takes place on grouse moors, areas of moorland in northern England and Scotland.

The name ‘driven grouse shooting’ refers to the way in which the grouse are driven towards the hunters (otherwise known as ‘Guns’) by beaters. A shooting party usually includes 8–10 Guns who stand in a line in the butts—hides for shooting spaced some 20–30m apart, screened by a turf or stone wall and usually sunken into the ground to minimise their profile—to shoot the grouse in flight. There is a strict code of conduct governing behaviour on the grouse moor for both safety and etiquette. Grouse shooting can also be undertaken by ‘walking up’ grouse over pointers, or by flushing the birds with other dogs.

The Red Grouse is a medium-sized bird of the grouse family or subfamily which is found in heather moorland in Great Britain and Ireland. It is usually classified as a subspecies of the Willow Grouse, but is sometimes considered to be a separate species Lagopus scoticus. It is also known as the moorfowl or moorbird. The grouse can fly at up to 130km/h (81mph).

To combat this problem gamekeepers use medicated grit throughout the year which they place strategically in small trays throughout the moorland where Red Grouse are shot. The grouse then take up this treated grit orally to help digest the heather shoots in their gut. What is not clear, can the ingested medical element of the grit be passed on to unsuspecting consumers who then eat the meat? Are all the lead pellets used to kill the grouse removed from carcasses before the meat is contaminated by the lead? Are consumers informed about the medication eaten by the grouse before they buy? We would not take the chance no matter how small the risk, would you?

Heather moorland is rarer than tropical rainforest, and 75% of it is found in the UK as a result of grouse management, which provides an incentive to conserve heather moorland despite economic pressures of subsidies to intensify forestry and farming operations. 60% of all England’s upland Sites of Special Scientific Interest are managed for grouse shooting.

To support a large population of grouse, gamekeepers employ heather burning techniques. This involves burning patches of heather on the moorland. A burnt patch allows fresh shoots to come through which are ideal nutrition for grouse. Burning is done in patches so that there is a variety of heather heights, on a rotation of between 8 and 12 years. While the short new shoots provide food, the taller, older heather provides cover and shelter for the grouse.

Proponents claim that not only does heather burning help the grouse population thrive but it encourages other wildlife by creating a variety of habitats in moorland areas. However, one study suggests that burning heather has a large number of negative consequences on the diverse moorland environment, the underlying water table and the associated downstream rivers.

The study suggested burning reduces Sphagnum moss growth and the density of macroinvertebrates which play a vital role in aquatic food webs by feeding on algae, microbes and detritus at the base of food chains before they themselves are consumed by birds, fish and amphibians and that it reduces the water content of the upper layers of peat which results in the peat being less able to retain exchangeable cations which are important for plant growth and resist acid rain.

The RSPB undertake rotational heather burning on their reserves at Loch Garten and Hobbister in order to “increase the suitability of the reserve[s] for key breeding birds such as hen harriers, short-eared owls, merlins and curlews.”

Controlled, rotational burning helps reduce the risk of damaging wildfires and reduces carbon loss by up to 34 per cent. Large stands of rank and woody heather pose a major fire risk due to a significant build-up of fuel loads.

Uncontrolled wildfires are damaging as they burn with greater intensity and are likely to burn the peat beneath, causing considerable damage to the ability of the peatland to store water and carbon.

Cartridges are released from a shotgun after a grouse is shot Credit: Press Association

Research has also shown that on moors managed for grouse shooting, ground nesting birds such as curlew and lapwing, both of which are species of the highest conservation concern in the UK, are 3.5 times more likely to raise a chick to fledgling stage.

Studies on a former grouse moor in Berwyn found that within 20 years of grouse moor management ending lapwing became extinct at the site, golden plover declined by 90 per cent, and curlew declined by 79 per cent.

Grouse shooting supports the equivalent of 2500 full time jobs in England, Wales and Scotland, and invests approximately £100 million in conservation projects every year. A parish survey around Blanchland, Northumberland (population 140), has found that 55 per cent of people are either directly or indirectly involved in grouse shooting and that increased guest numbers in the four-month shooting season push up the hotel’s average occupancy rate from 50 to 65 per cent per year. Grouse is also served in many local pubs, hotels and restaurants, boosting the hospitality industry.

Some important statistics are:

The driven grouse shooting industry has been criticised by some conservation bodies for harming moorland habitats and for illegally persecuting predators, particularly the hen harrier, which preys on grouse chicks. The RSPB has called for shoots to be licensed, and former RSPB Conservation Director Dr Mark Avery raised a petition calling for a ban on the practice.

By its closure on 21 September 2016 the petition had attracted 123,077 signatures, triggering a parliamentary debate on the practice, held in Westminster Hall on 31 October 2016. Snares placed to trap foxes which prey on grouse pose a risk to walkers and runners if they are poorly marked.

This article was published by Wikipedia.org and can be found on the link https://en.wikipedia.org/wiki/Driven_grouse_shooting.

We invite you to share your opinion whether “Driven Grouse Shooting” should be banned? Please vote and leave your comments at the bottom of this page: