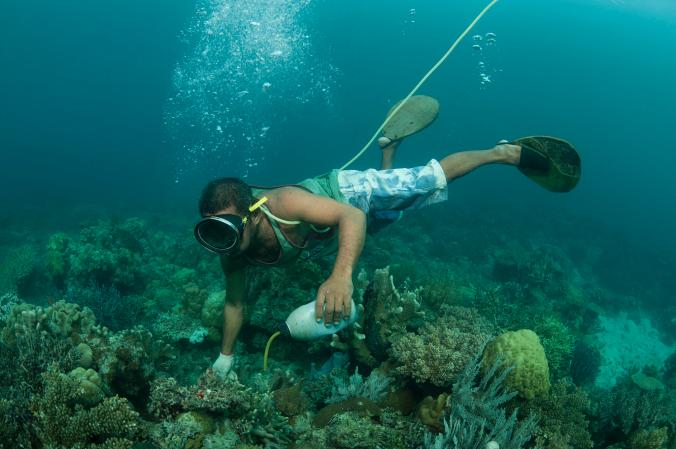 Sodium cyanide is a highly toxic chemical compound that many fish collectors in the Philippines, Sri Lanka, and Indonesia (the largest exporters of tropical fish) crush and dissolve in squirt bottles to spray on the fish—and the reef and all the other marine life in the vicinity. Stunned, the target fish can then easily be scooped up.

Up to 90 percent of the tropical fish that enter the U.S. each year are caught illegally with cyanide.

An estimated 70 to 90 percent of the 12.5 million tropical fish that enter the U.S. each year are caught illegally with cyanide, according to the National Oceanic and Atmospheric Administration and the United Nations.

The Center for Biological Diversity, a nonprofit environmental conservation organization, along with the Humane Society and For the Fishes, a Hawaii-based organization that developed the award-winning Tank Watch app, filed a petition Monday calling on the U.S. government to crack down on these illegal imports.

“Compared to many environmental catastrophes currently facing the world’s oceans, this is one that can easily be solved,” said Nicholas Whipps of the Center for Biological Diversity. “Because the U.S. is such a powerful market player in this industry, the burden to stop this practice falls disproportionately on the United States’ shoulders.”

Where do tropical fish in saltwater aquariums come from?

They’re almost exclusively taken from the reefs of Southeast Asia to Fiji to Kenya to Hawaii. People are trying to breed popular species in captivity, but no one has really figured it out yet. There are about 1,800 species of marine aquarium fish in the trade, and breeders have only managed to successfully raise a few of those, including several types of clownfish and gobies.

Yes, it is illegal to catch fish with cyanide.

The Philippines, Sri Lanka, and Indonesia have all banned cyanide fishing, according to the Center for Biological Diversity, yet it still happens on a large scale. Enforcement just isn’t strong enough. In the Philippines, private planes allegedly bring in cyanide to the fishermen and then whisk away the live fish, the World Wildlife Fund reported.

Live fish make fishermen a lot more money than dead ones, so more and more fishermen have turned from supplying the fish-for-food trade to the fish-for-aquariums trade, according to the World Wildlife Fund. The marine aquarium trade is worth about $200 million a year.

What does cyanide do to the targeted fish?

Umberger cites a scientific study on cyanide exposure, and it’s not pretty: Upon being squirted with cyanide, fish suffer “severe gasping, followed by loss of balance and a complete loss of all respiratory activity.” Some fish get too much exposure and simply die then and there. Many, many more die in transit. Others may hang on until they’re in an unsuspecting aquarium owner’s tank and then give out.

“The name of the game for those in the trade is ‘sell the fish as quickly as possible’ because then you’re passing the risk on to the next buyer,” said Rene Umberger, the director of For the Fishes.

What does it do to the rest of the marine life?

Cyanide that doesn’t kill a fish temporarily impairs its ability to swim and breathe. Then there’s the coral. Each live fish caught with cyanide destroys about a square yard of coral, according to biologist Sam Mamauag of the International Marinelife Alliance, in the Philippines. Even in lower doses, cyanide can cause coral bleaching and mess with the coral’s biology. Sometimes, the coral is killed outright.

Once the coral’s dead, the entire ecosystem collapses. Without coral, reef fish, crustaceans, plants, and other animals no longer have food, shelter, and breeding grounds. The effects ripple up the food chain, affecting thousands of species—us included. Reef habitats provide food for tens of millions of people and contribute to the livelihoods, through commercial fishing and tourism, of many more.

The U.S. has a law called the Lacey Act, which makes it illegal to import any wildlife caught contrary to another country’s laws. That gives U.S. law enforcement the ability to turn away shipments of fish sourced using cyanide. But no U.S. agencies now test imported fish for traces of cyanide, Whipps said. The new petition calls on the National Marine Fisheries Service, U.S. Customs and Border Protection, and U.S. Fish and Wildlife Service to use the Lacey Act authority to crack down on cyanide-caught fish by requiring testing and certification of imported tropical fish.

What can you do?

Advocates are calling on aquarium hobbyists to buy only fish bred in captivity. Some stores have labels, but the best way to find out is to ask. For the Fishes’ free app Tank Watch, which was developed with the Humane Society of the United States, Humane Society International, and software developer Aysling, helps you identify reef-friendly species.

This article was first published by National Geographic on 10 Mar 2016.

We invite you to share your opinion whether fishing with cyanide should be banned? Please vote and leave your comments at the bottom of this page: